Software companies are shifting from the traditional on-premises licensing/deployment model to SaaS and cloud subscription models, and it’s not a trivial matter to make the switch. They have to change operational practices and investments and stop doing some activities to be able to do the new models’ activities. The transformation pulls them in two different directions.

Outsourcing service providers have the same problem as the software vendors. As SaaS takes hold, it changes customers’ expectations, and they want to buy services on a consumption or subscription basis instead of buying a set of components. They want to pay only for what they use rather than a take-or-pay model where they have to buy commitments.

In attempting to accommodate these increasingly vocal clients, providers are forced to move in two opposite directions at the same time. First they have to accommodate their original client demands with their existing service contracts structured in a business model where the provider charges customers on the basis of service components (e.g., buying 30 applications people, 15 servers, 50 licenses). But new demands require that these components are bundled, delivered and priced on a functionality on demand, or consumption basis. Their SaaS or Saas-like expectations require different approaches and even different customer support.

Providers, thinking the dilemma is just a pricing issue, try to make their existing teams and business operate in both worlds and price services on a consumption basis the way new customers want to buy it. But they quickly find that’s not the case. To succeed, they need to backwards-engineer their entire delivery platform so it can work that way.

The alternative is to have two “carriages.” But then they have double the costs. There’s the frustration in getting to the Promised Land: they’re faced with having one carriage and two horses pulling it in opposite directions or having two carriages and twice the cost. The trip to the Promised Land of growth in the cloud world isn’t as simple as it appears.

Business Process Outsourcing or Operations or Management or Services? What’s with the Name? | Sherpas in Blue Shirts

Nomenclature for third-party provision of business process related services (typically called BPO or Business Process Outsourcing) has stirred up quite a debate in the industry. Is it just a marketing exercise or a step in the maturation of the industry? Clients have to feel the difference before they are willing to adopt a new name; otherwise it is purely marketing.

Most of the conversation is about replacing the letter “O” in BPO. Accenture retained the “O” but are calling it “Operations.” Nasscom along with several other service providers started calling it BPM (Business Process Management). Several industry stakeholders have asked for Everest Group’s opinion, so here’s my list of different acronyms (in ascending order of my personal preference):

The industry is desperately seeking ways to go beyond the cost reduction mindset and evolve into a cost+ value proposition. Changing the name of the industry will not be of much use unless the underlying behavior (both buying and selling), solutions, contracts, and performance of the industry change.

However, I fear the industry is just trying to change the name versus actually working on the value, which will leave it open to criticisms. It’s just like putting a new coat of paint on an old car that needs an engine replacement!

So let’s try and go beyond this “name game” and focus on things that really matter.

The slowly fading recession has left a profound impact on pricing in sourcing contracts. That impact is seen in a trilogy of forces with long-term ramifications that will keep pricing at recession-era levels for the foreseeable future, even as contract volume rebounds with pent-up demand. This “new normal” imparts lasting implications on future sourcing agreements. 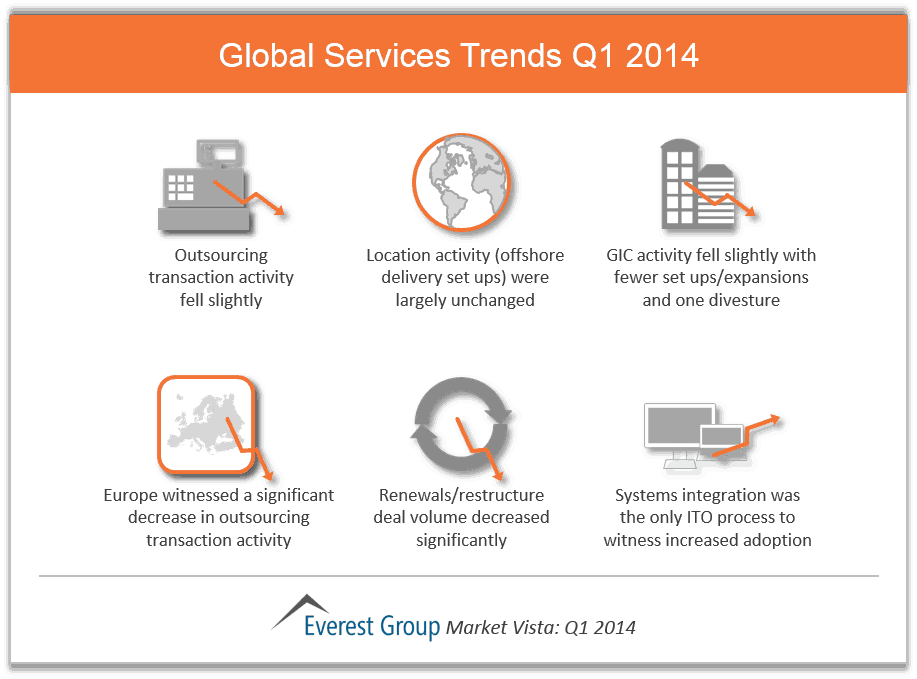 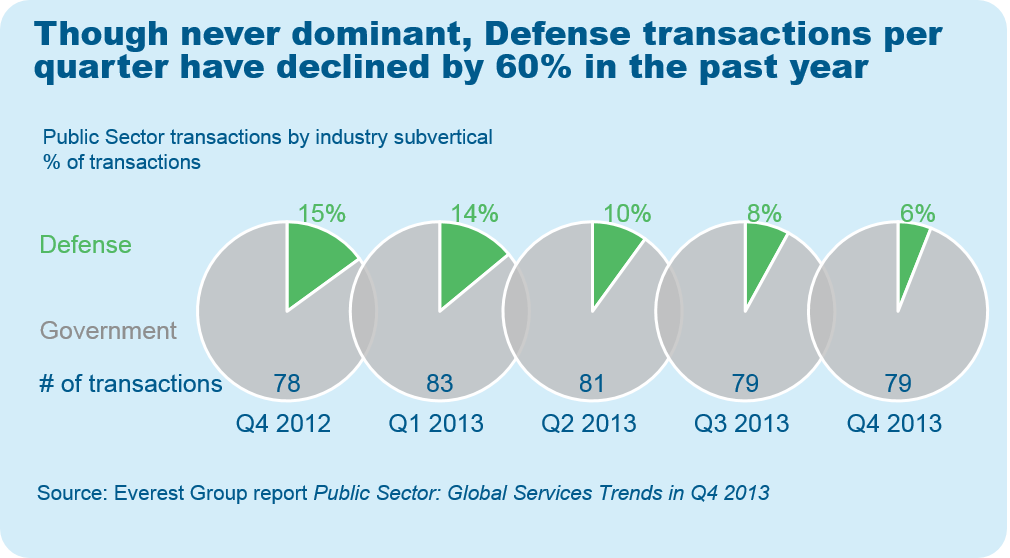 Though never dominant, Defense transactions per quarter have declined by 60% in the past year

The Son-in-Law | Sherpas in Blue Shirts

To date, the global services industry in 2014 has all the signs of being a “son-in-law.” As many parents will tell you about their prospective son-in-law: “He’s nice, but … I was hoping for something a little better.”

2014 arrived with so much promise, both in IT and BPO. Europe’s economy was improving. We hoped the U.S. economy was ready for robust expansion. We hoped we would see a surge in discretionary spending. And we hoped that the uncertainty that characterized the past four years would recede. We also anticipated that disruptive technologies and new solutions in cloud, big data and analytics would generate robust growth opportunities in the services space.

All these things happened. The economy has stabilized and new technologies are generating growth opportunities.

But as we look at the net results of the first quarter, well — it’s nice … but it does feel like a son-in-law. We were hoping for something a little better.

Are We About to See a New Wave of Shared Services Activity? | Sherpas in Blue Shirts

We were recently a sponsor at the 18th annual Shared Services & Outsourcing Week conference in Orlando (part of SSON, the leading event for shared services). The significant portion of attendees that are just embarking on shared services for the first time and opening up new shared services capabilities was striking to us. It raises this question: Why are we seeing a new wave of shared services situations?

So it’s certainly interesting to see new shared services starts on the upswing, especially since BPO in 2013 certainly performed less robustly than we had hoped for in terms of growth.

We’ll be watching this trend. But there can be no doubt that based on this conference we are seeing a pick-up in new shared services starts. 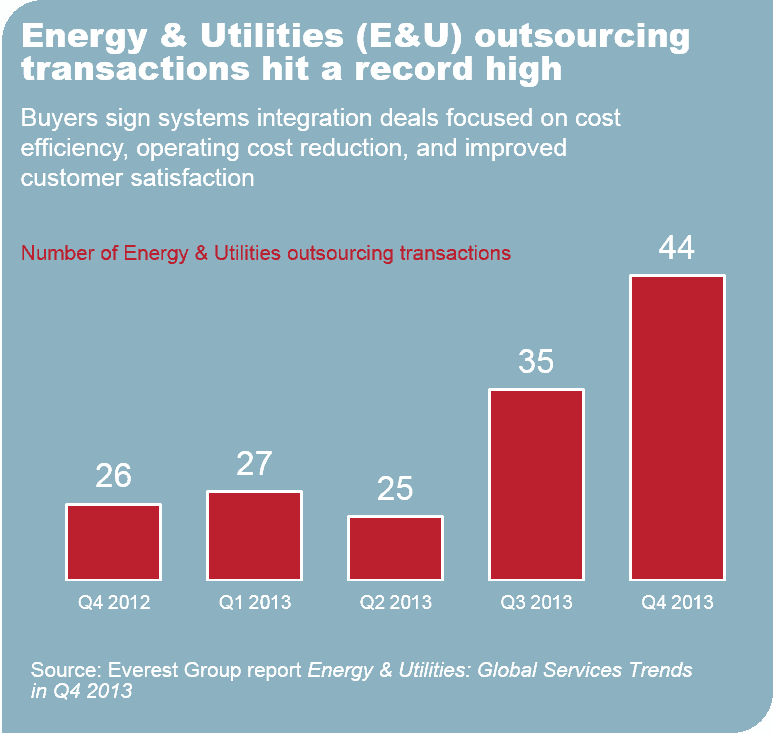 High activity in the E&U vertical was driven by a large number of systems integration deals awarded by buyers looking to achieve cost efficiency, reduce operating costs, and improve customer satisfaction. Going forward, rising energy prices and environmental concerns may lead to some traction in smart meter and smart grid implementations, which is likely to provide a short-term boost in transaction activity. 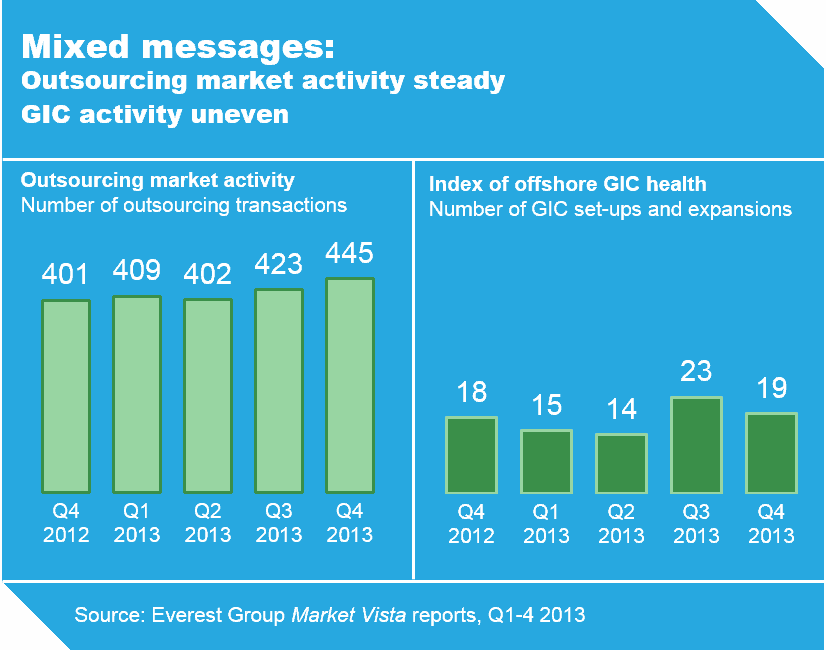 Over the past five quarters, outsourcing market activity has seen a slow but steady rise, while GIC set-up and expansion activity has been uneven. 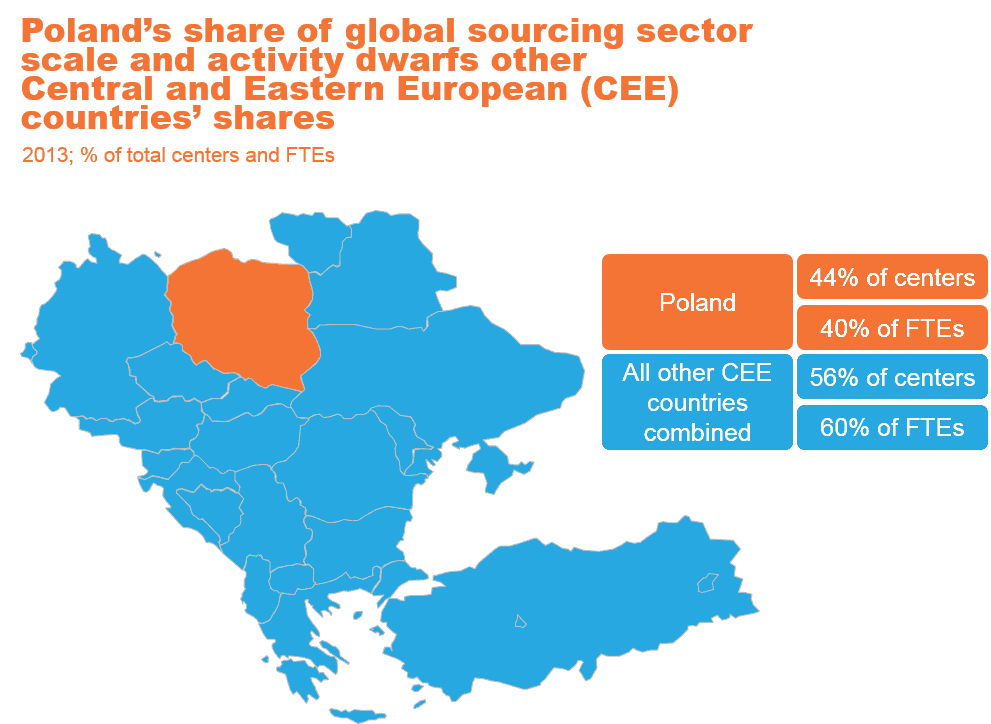