Global In-house Centers (GICs) are increasingly adopting Robotic Process Automation (RPA) to drive quality and productivity gains and savings of up to 40 percent in their delivery of Business Process Services (BPS) for the enterprise. The combination of RPA and GICs represents a unique synergy, so much so that the adoption of RPA in GICs is no longer a matter of “if” but “when,” according to Everest Group, a consulting and research firm focused on strategic IT, business services, and sourcing.

“RPA offers 25 to 40 percent additional savings on BPS spend compared to current offshore operations, and early adopters have logged impressive results across a wide range of efficiency and productivity metrics,” said Aditya Verma, practice director at Everest Group. “So it’s not surprising that nearly 78 percent of GICs have either implemented or are actively planning RPA, and the sizzling RPA software market has grown 100 percent each year for the last two years.”

Describing RPA as “the next imperative,” Everest Group analyzes the distinct position of GICs to provide leadership in the robotic automation journey for their enterprises in a newly published white paper: “Upshifting Value and Talent through Robotic Process Automation.”

Based on Everest Group’s extensive research examining the state of RPA and the broader topic of Service Delivery Automation (SDA), the white paper is available for free download (with registration) here.

High-resolution graphics illustrating key takeaways from this report can be included in news coverage, with attribution to Everest Group. Graphics include:

Characteristics That Make a GIC Well-Suited for RPA | Market Insights™ 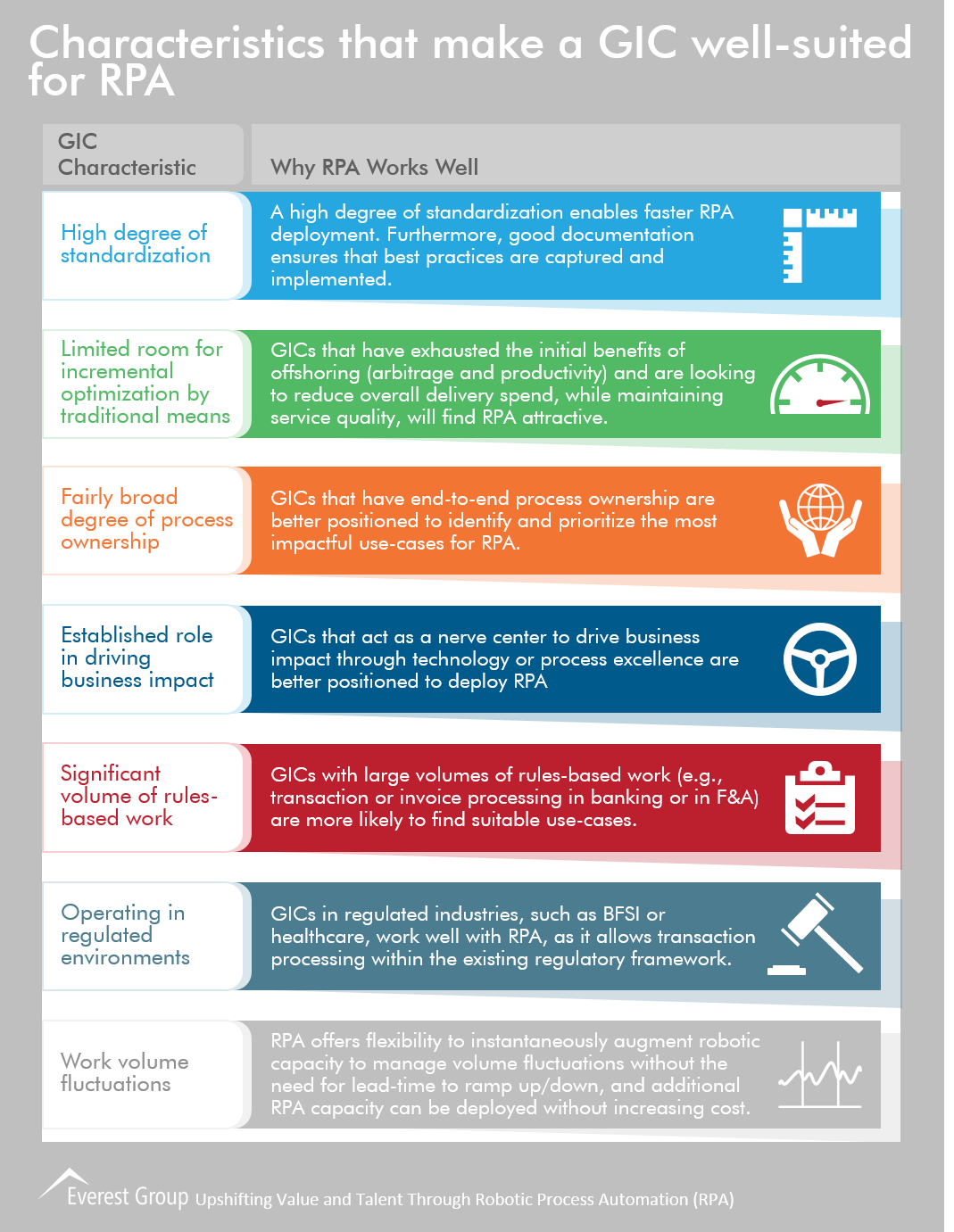 Characteristics that make a GIC well-suited for RPA 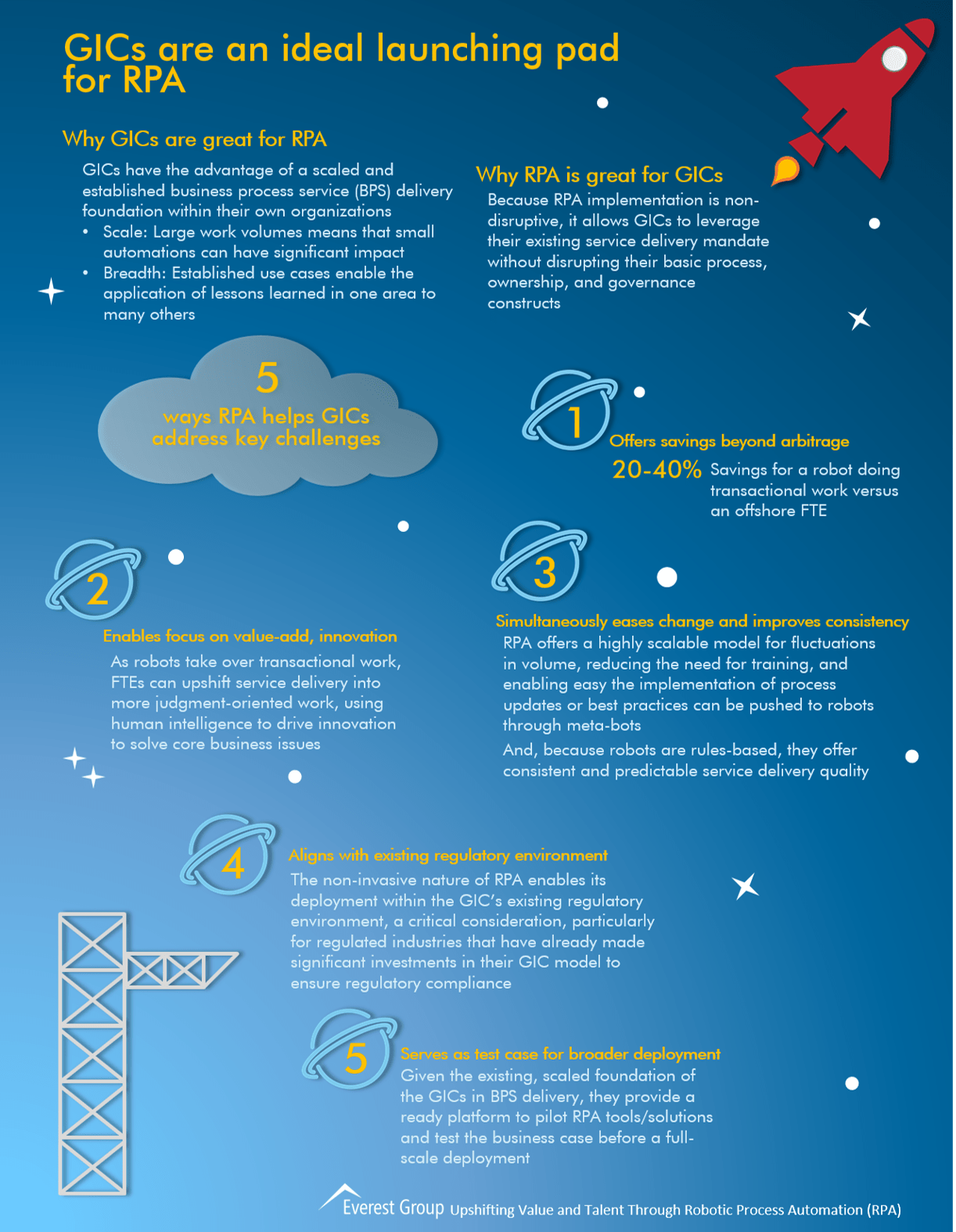 GICs are an ideal launching pad for RPA 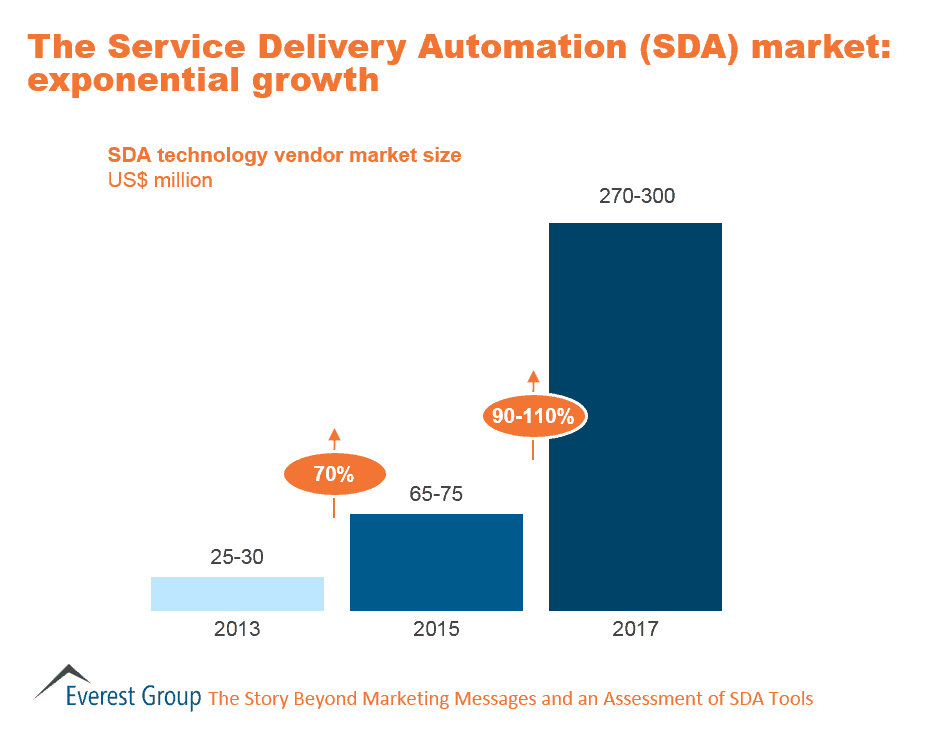 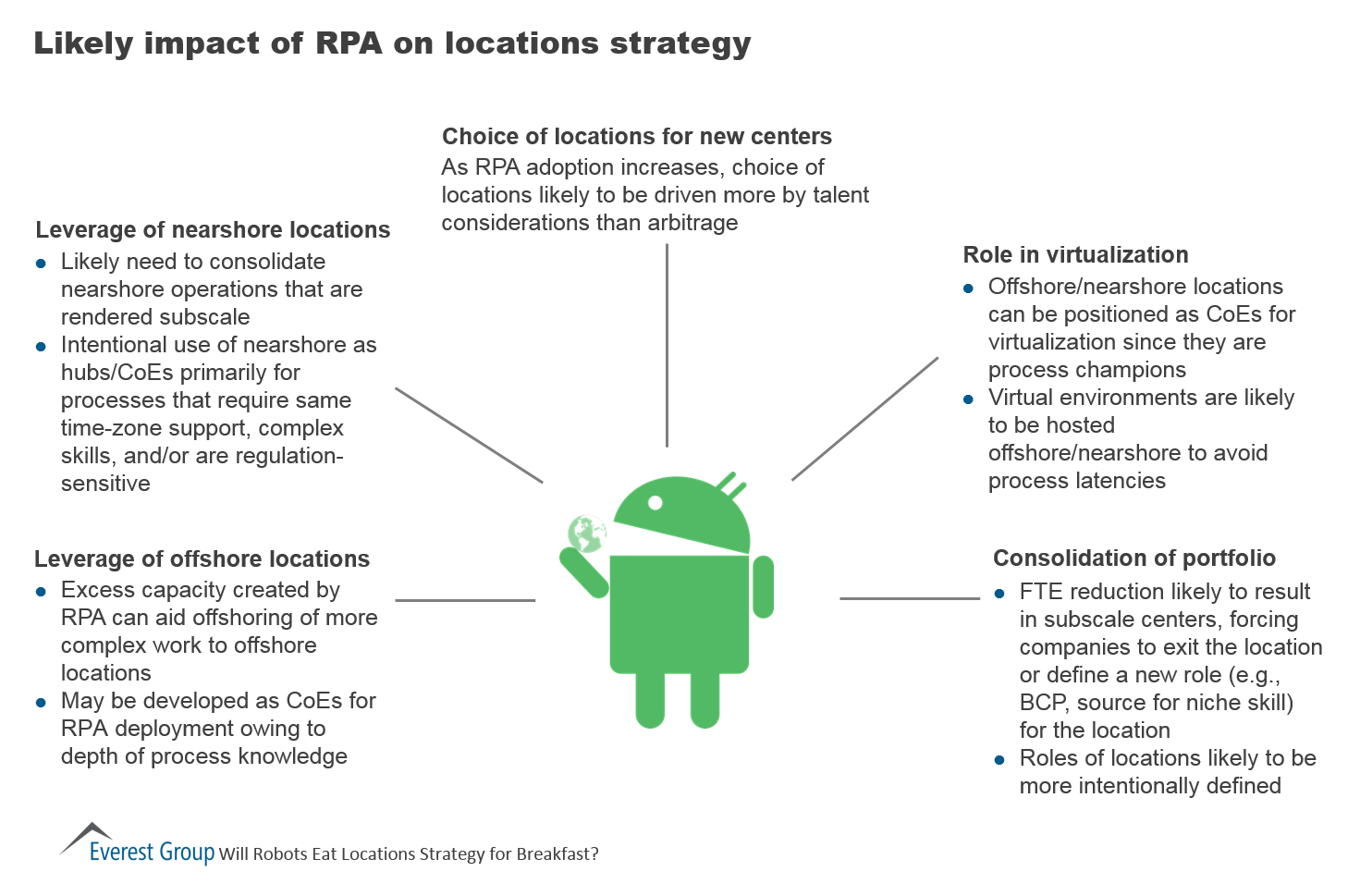 It’s the middle of the week and despite all the caffeine-induced stimulation I am in a cynically contemplative mood.

Reason? The past 6 weeks have been spent attending analyst events and conferences, listening and debating with business leaders and thought leaders on what will make the global services industry click. There has been a flood of “paradigm-changing” buzzwords, new solutions on the horizon, and yes, the predictions that claim to change the world in the next 24-36 months. I’ll not go into the details but if you have managed to find your way to this blog, you probably have already heard these terms – Innovation, Robotics, Automation, Digital, and Internet of Things! (And are probably thinking – “here goes another blog on digital transformation. Yawn!”)

That “yawn” is a symptom of the problems facing the technology industry. Gone are the days when you would look at a new product or an interface and say – “Wow!” I think the last time I exclaimed wow was more than a decade ago when I first saw a GPS map and the smooth voiceover guiding me to my destination. Since then there indeed have been some “Aha” moments but nothing that made me fall off my chair. The reason probably is this – most of our attention has been on innovation rather than invention.

Frankly, all the innovation that we talk about today is a mishmash of just three inventions – computing, internet, and devices. Robotics – check. Automation – check. Digital – check. Internet of things – check! True, we are working on miniaturizing, increasing processing speed, writing hugely complex analytics code, and building beautiful interfaces. Reality check – we are still just exploring the “art of the possible” with the Legos.

What is wrong with that? Absolutely nothing. Incremental invention (or innovation) is a great thing. My issue is with paradigms that are dime a dozen these days. Here is the problem – We are in the age of the “moolah.” Theoretical or conceptual innovation has lesser weight since anything that is not investor-funded and cannot be in hands 18 months down the line, is meh. And that is why the less than smart pursuit to reset and invent terminologies instead of true touch and feel invention. Due to lack of true innovation, buzzwords and bubbles are what keep investors excited and money mobile. And these buzzwords are finally leading to madness.

Each industry event I went to saw analysts and leaders beating each other up with their own definitions of what “Digital” meant – for some it was “business transformation using digital,” for some it was “SMAC,” for some it was “driving growth and efficiency using digital,” while some lazy ones were resigned to “anything that is not analog”! Frankly, this debate made me cringe. It is only when industries lack true innovation that they resort to chest thumping using buzzwords. Global automotive industry is a case in point. Till Elon Musk came along, it was all about lines and curves, three-year warranties, and miles per gallon.

Hence, while I take another sip of my café Americano, I hope a maverick comes along and says, it’s time for telepathic computing, time travel, and an invisibility cloak. Gulp!

Much of the industrial arbitrage industry is based on developing tight and clear SOPs (standard operating procedure) for work, putting it into large factories in India where very bright people are asked to operate with tightly defined parameters and conform to them very rigorously and then go home. Unfortunately, in doing so, we inadvertently created human robots.

We put these people in air-conditioned environments, restrict their capability for independent thought and expect flawless execution from them. How is this different from a robot?

Why don’t we go the whole way and automate those functions now performed by human robots? We’ve done all the preparation. We have the procedures defined. We’ve eliminated the variability. Why don’t we just go to the next stage? In fact, I think that will happen.

Vishal Sikka, CEO at Infosys, is the person who first brought to my attention his observation that in many respects we treat our most precious resources like robots and operate them like machines. This speaks well for both his insight and also for Infosys in moving to address this issue.

Although the human robots model created real value for customers as well as service providers and also created employment for hundreds of thousands of people, it also had some negative effects. People don’t want to be treated this way.

We need to allow these people who have been conditioned into robotic types of behavior to think on the right side of their brains as well as the left side of their brains. We need to liberate this very talented workforce from their highly constrained environment and tap into their creativity, which separates humans from robots.

Another effect of the human robots model is that it opens the door to full automation and changing the method of service delivery. With automation, we no longer need human robots. But then what do we do with these people?

I think we need to create a fundamentally different people model. We need people with different skills that are not robotic in nature. It will change how we recruit, train, incent, measure, and manage people. And it will require change in the way we provide for context, connection, and communicating with customers and engaging in problem solving.

Adam Smith, a Scottish philosopher about the market economy, warned that people who perform a few simple operations in which the effects are nearly always the same have no occasion to exert understanding in removing difficulties or applying inventions and consequently lose the habit of such exertion.

Besides heeding Smith’s warning, automation is here and forcing the services industry to change. It will be interesting to watch the development of a different people model that can deliver even more value than the human robots provided for many years. 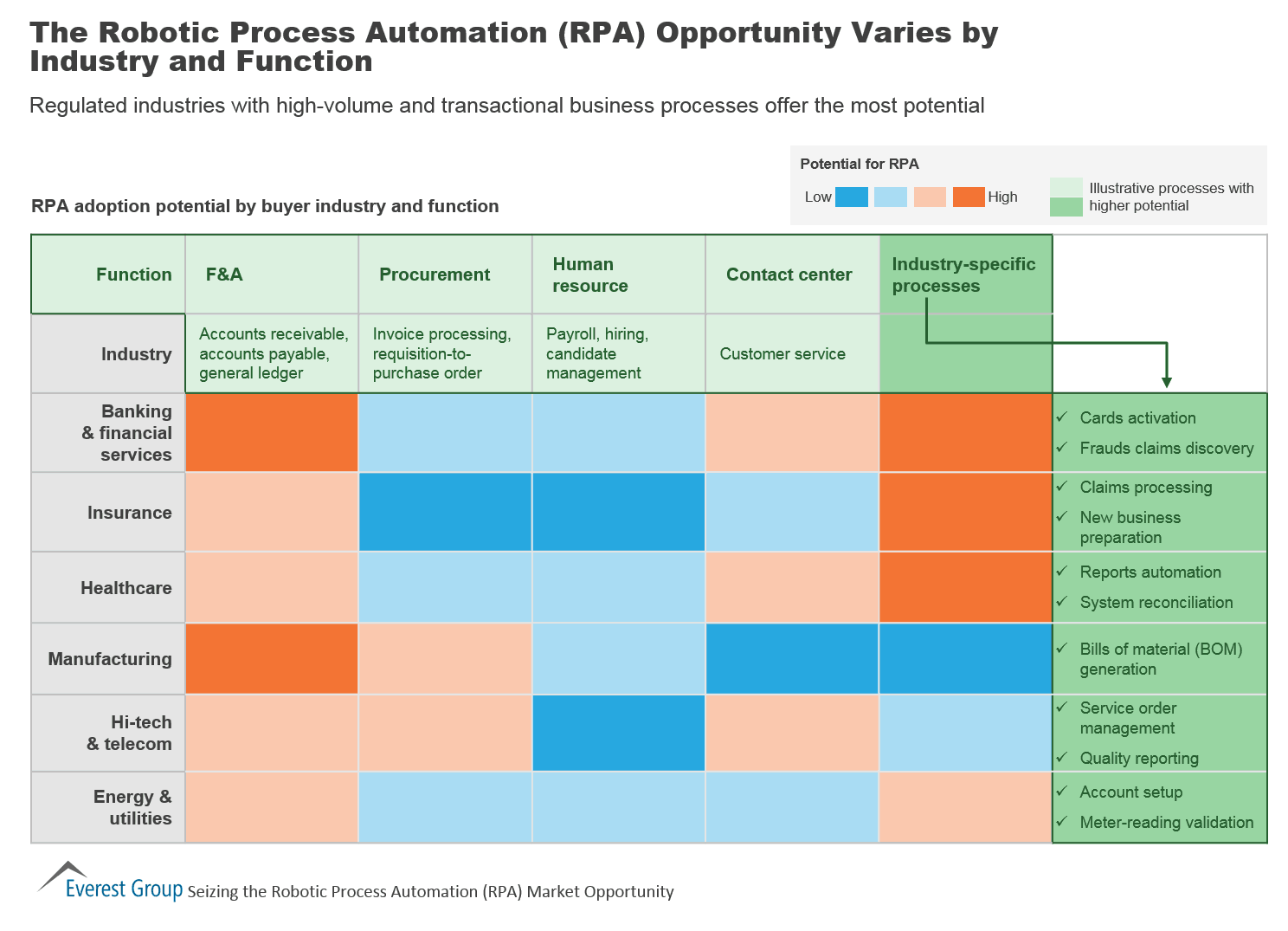 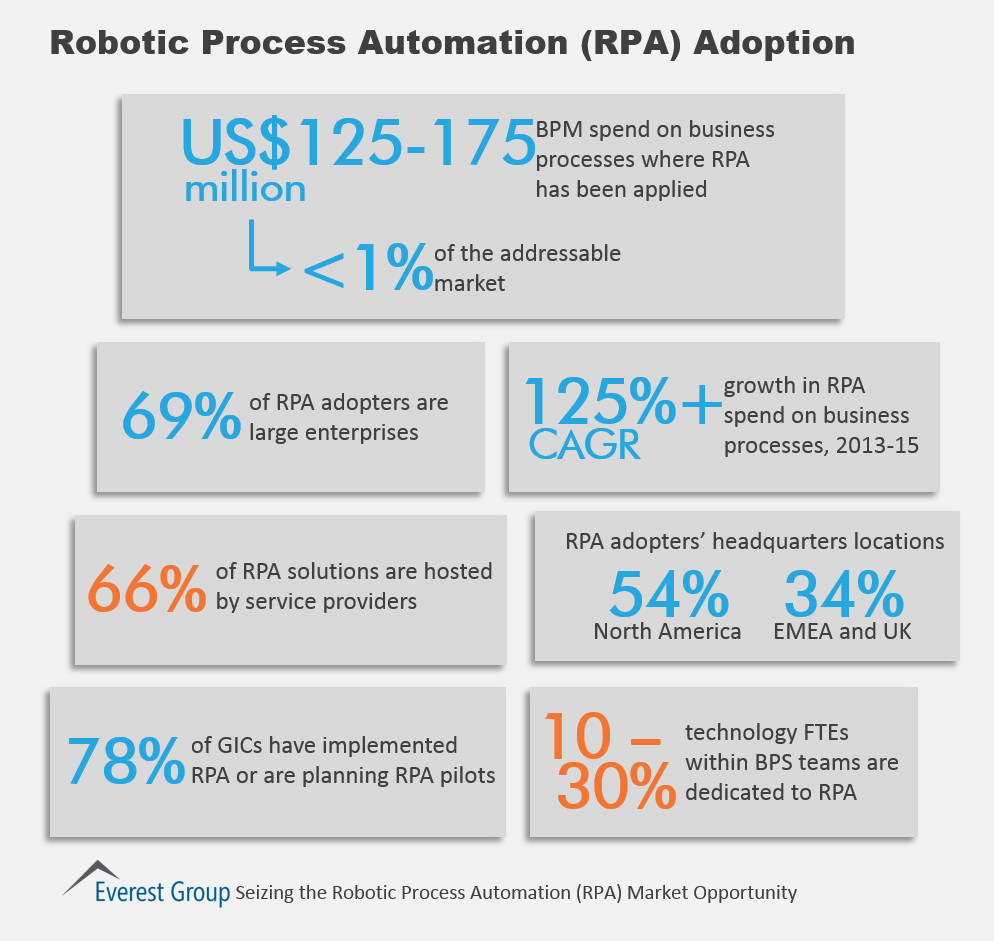 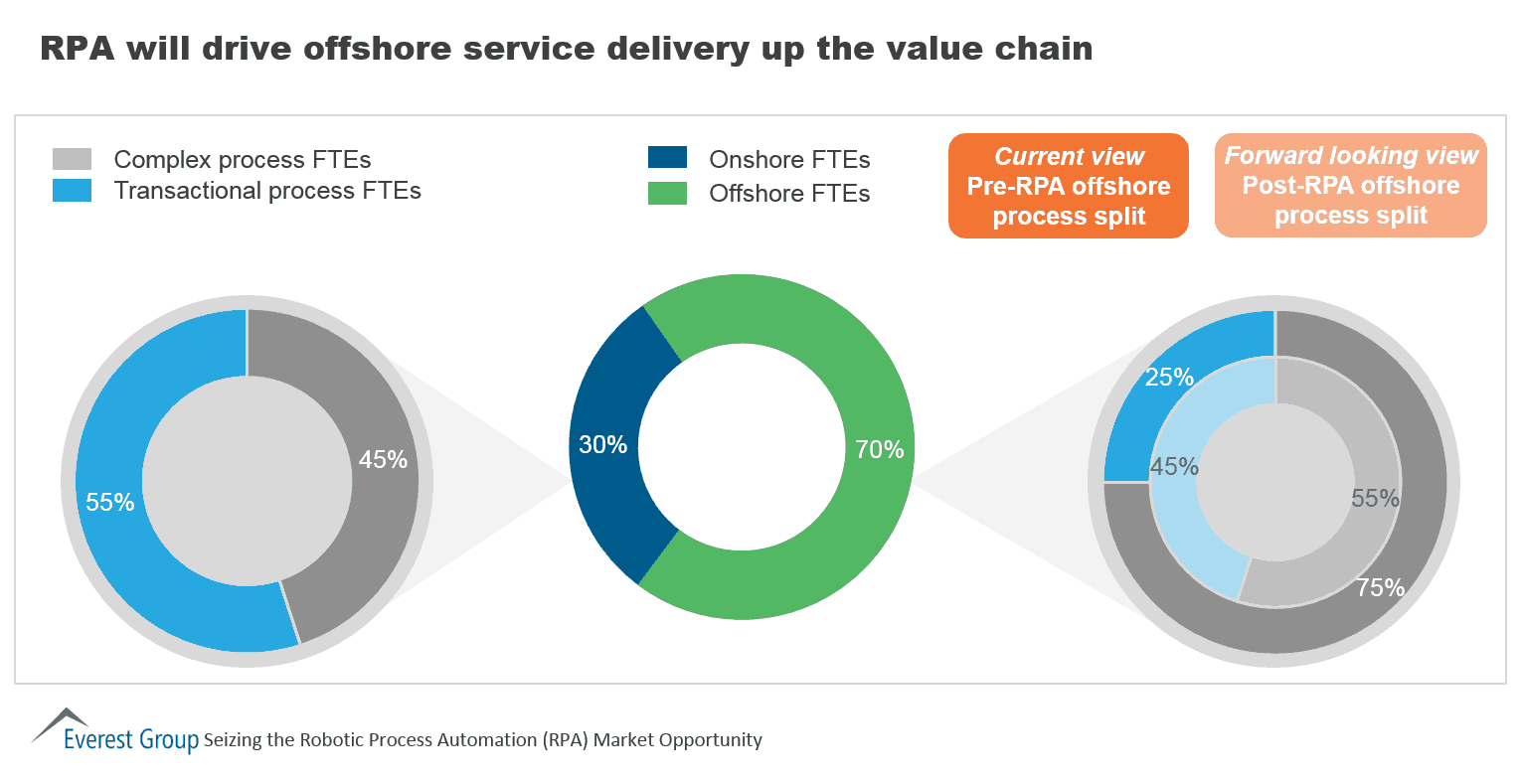 RPA will drive offshore service delivery up the value chain