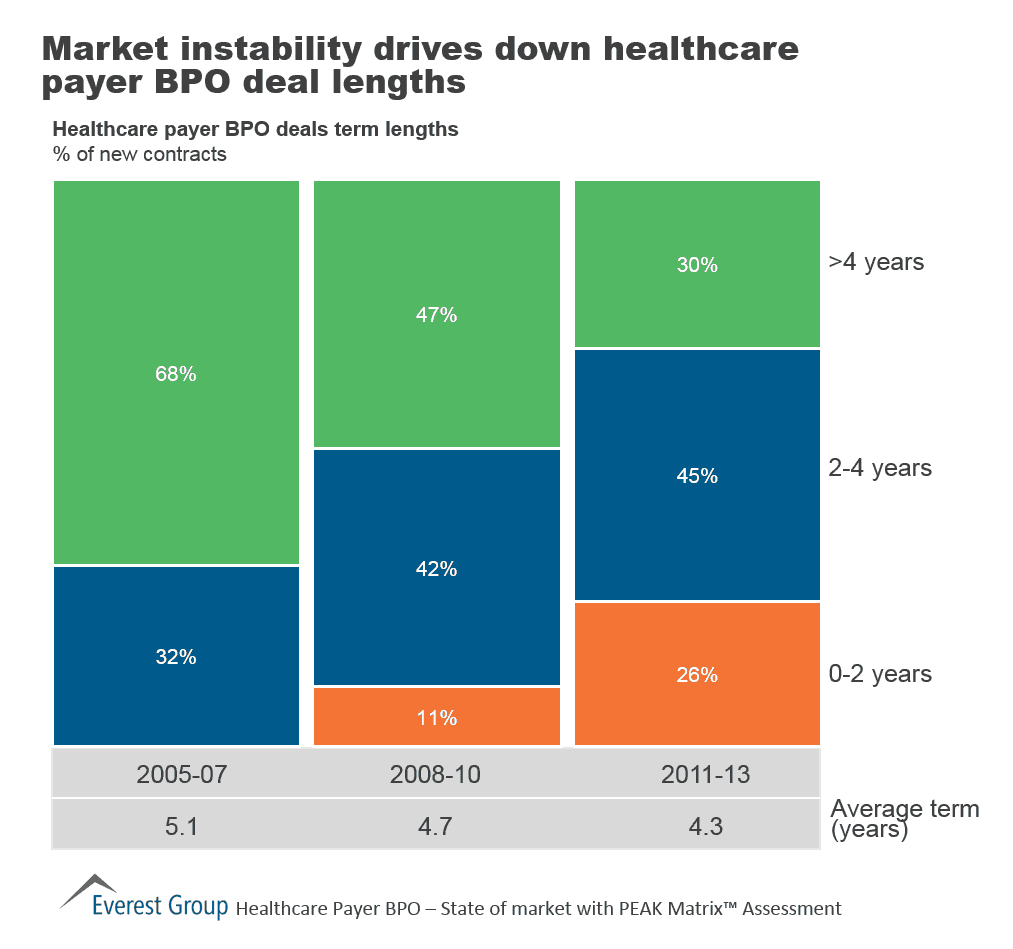 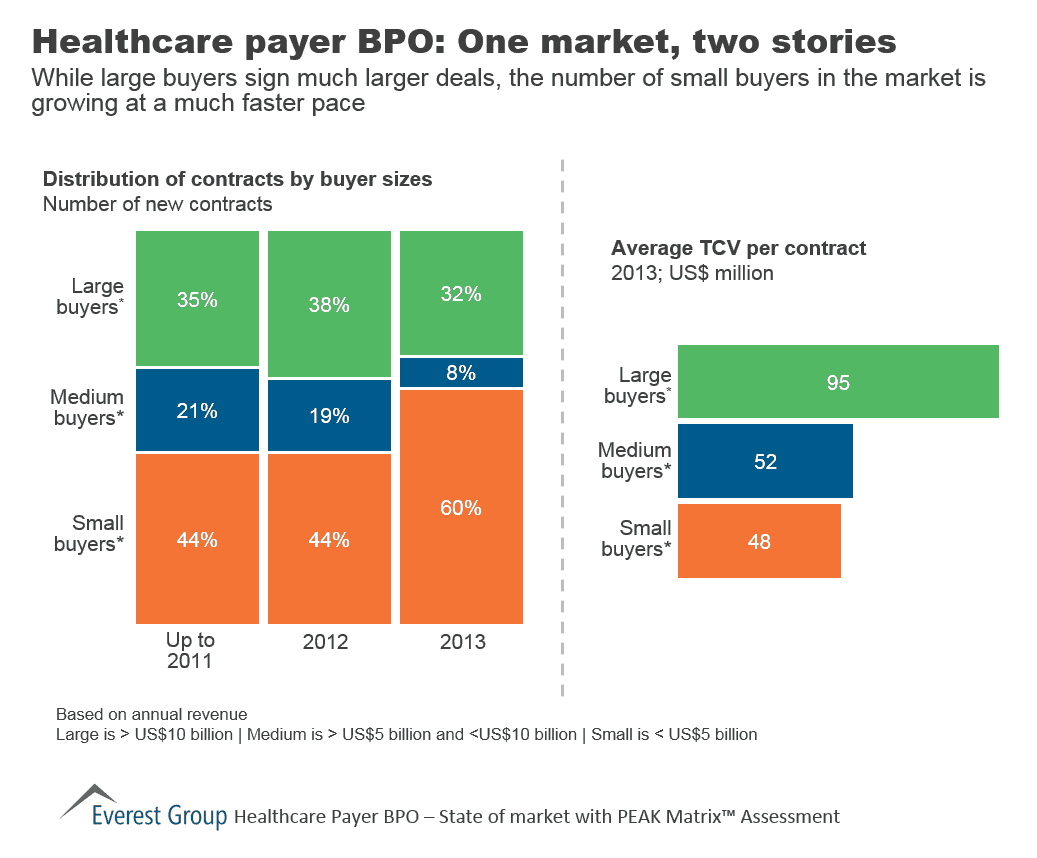 While large buyers sign much larger deals, the number of small buyers in the market is growing at a much faster pace 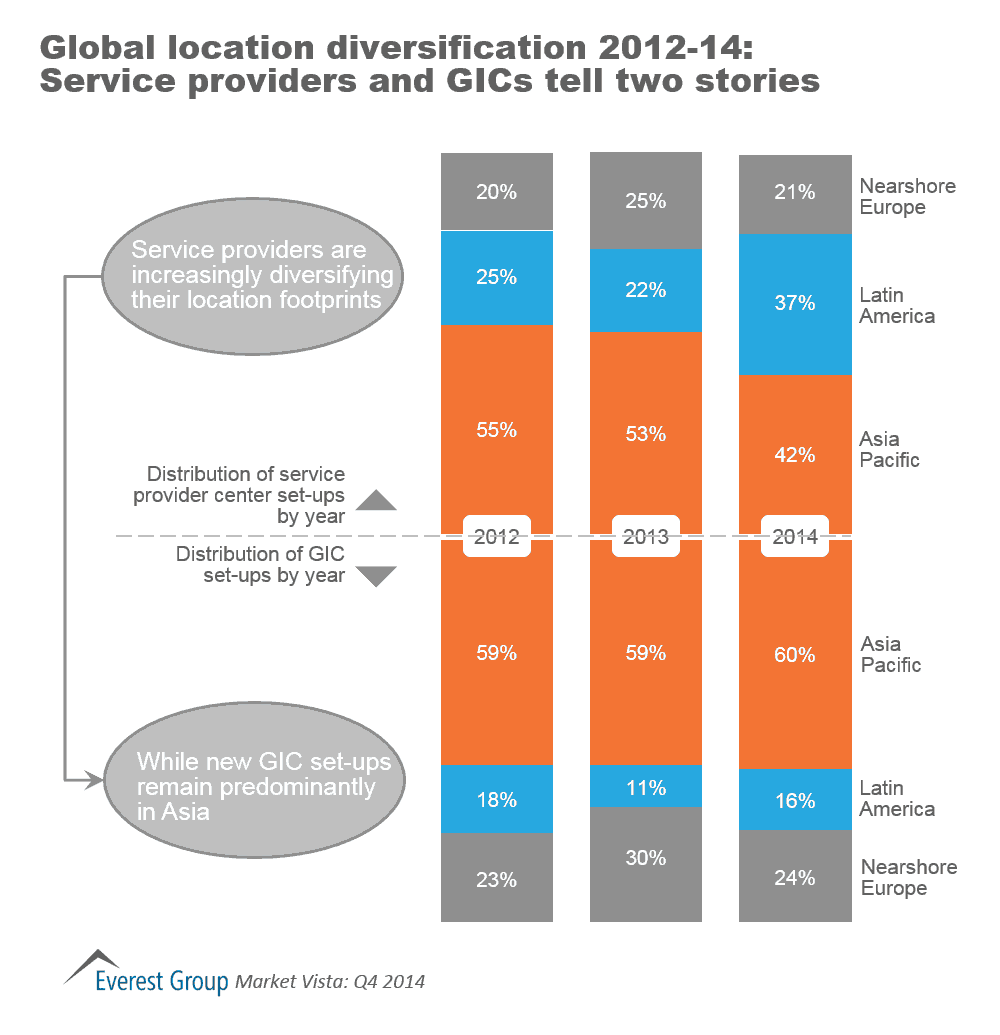 Moving into an increasingly automated world is an ongoing journey – which poses a number of challenges for service providers.

Perhaps the most significant challenge is customers’ interests often are not aligned with their service provider. This quickly becomes obvious when the services are priced in FTEs. Automation reduces the quantity of FTEs, which means revenue loss for the provider. But if services are in a transaction-based model, automation dramatically reduces the cost of processing the transaction, and the customer wants a share of that cost reduction.

I think this is a startling challenge to the BPO industry. At a time when revenue growth is already slowing, if revenue drops proportionately with the level of automation (and it makes sense that it would), service providers not only won’t be able to grow revenues but will have to run very fast to stay even with their revenues.

Certainly automation won’t remove all people from a process; but more and more will be removed over time as the tools expand and become more mature and as companies become more comfortable in using the tools and as their learnings and the data from the tools allow them to continue to drive deeper levels of automation. So we can expect the effect of service delivery automation to increase over time.

Thus I believe we’re looking at substantial change and disruption coming to the services industry. And it’s not a one-time impact. It will be an ongoing impact. 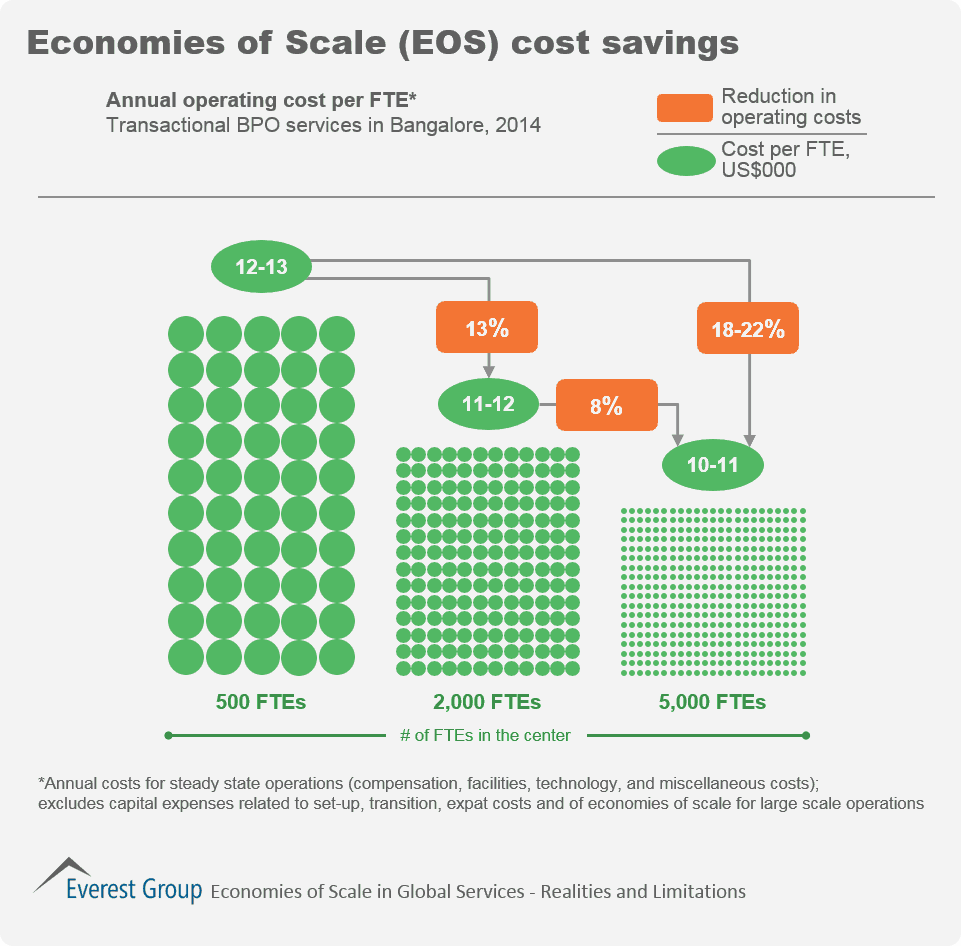 With continued momentum in its turnaround strategy and a raft of announcements at HP Discover, the technology giant appears reset and rebooted. Its strategy to focus on products and services supported by cloud, analytics, mobile, and security, the so called “new style” of BPO and IT is paying dividends with a number of new contract wins. At the same time, HP’s cost cutting measures are increasing profitability, as commoditization pushes prices and revenue down.

HP Discover week saw a raft of announcements from the company including:

These announcements follow the publication of HP’s FY14 results on November 20, which showed HP’s turnaround to be on track.

Focusing on HP Enterprise Services, the FY 2014 operating margin of 3.6% reversed the downward trend of the previous two years but revenue at $22,398 million continued to shrink (-7% y/y). There is still some way to go before the new style of services help halt the revenue decline. There is a legacy of older style services contracts that HP Enterprise Services will have to handle for now. Not all clients are ready for change but some are and the proportion will go up steadily over time as more organizations upgrade and transform their capabilities. HP Enterprise Services is making progress by winning contract renewals and expansions based on its new style of services. It won 11 out of 12 deals that it bid for against competitors such as Accenture, Capgemini, Genpact, IBM, and Wipro in 2014 to date. The wins included three contract expansions, four renewals and, four new logos.

The strategy to focus on new style of IT and BPO is to continue enhanced with new commercial models. The focus on HR, F&A, customer engagement, and digital is to continue with HP taking more advantage of state of the art technology such as service delivery automation (SDA). Cloud, big data, mobile, and security are inherent to the new style of IT and BPO. These, HP can support on its software-defined infrastructure which should give it a clear advantage over some competitors.

It is a no brainer for HP to flex its technology muscle and to focus on the so called new style of services. The question is why it took so long for this to become a strategy for the company. It is thanks to Meg Whitman’s ability to mobilize HP that the strategy has been implemented and the turnaround is working. She has been able to do what her predecessors failed to do – set the course and get buy-in internally. Other measures have included a renewed salesforce armed with enhanced offerings to go to market with and a reorganized group to support sales.

Next is the planned split of HP, as part of which it will be divided into two separate companies:

When the split is completed the new companies will be able to focus on their core strengths and growth. The challenge for HP is not to let the task of separation distract senior managers from supporting sales and ensuring that the ship remains on course.

The BPO segment of the services marketplace has been undergoing significant change in its growth trends. As we lean into 2015, here’s a look at how and where BPO is experiencing the biggest growth.

The industry-specific segments are growing significantly faster than the traditional horizontal offerings. For example, our study of the three-year CAGR of various segments reveals that:

This data underlines the shift that I’ve commented on in previous blogs. Customers not only expect industry expertise and relevant industry solutions but also favor them over the horizontal segments of generic process-oriented offerings.

Nevertheless, some process-oriented segments are growing very quickly. Examples of segments on the adoption fast track include:

Another factors shaping BPO growth for 2015 will be adoption by buyer size. Our research tracking new BPO contracts points to this trend. For example, in Banking BPO contracts signed as of December 2013, midmarket customers signed 57% of the contracts in 2011-2013, a sizeable increase over 43% signed up to 2010.

Underpinning the shift to more industry-focused and customer-focused offerings, is another shift I’ve blogged about several times — the shift of influence from the central buying organizations to the business units. This trend has been a major factor in BPO adoption during 2014 and will continue to exert pressure that creates both upticks and downward trends in BPO for 2015.

Arbitrage Generally Sustainable for Most Locations and Functions | Market Insights™ 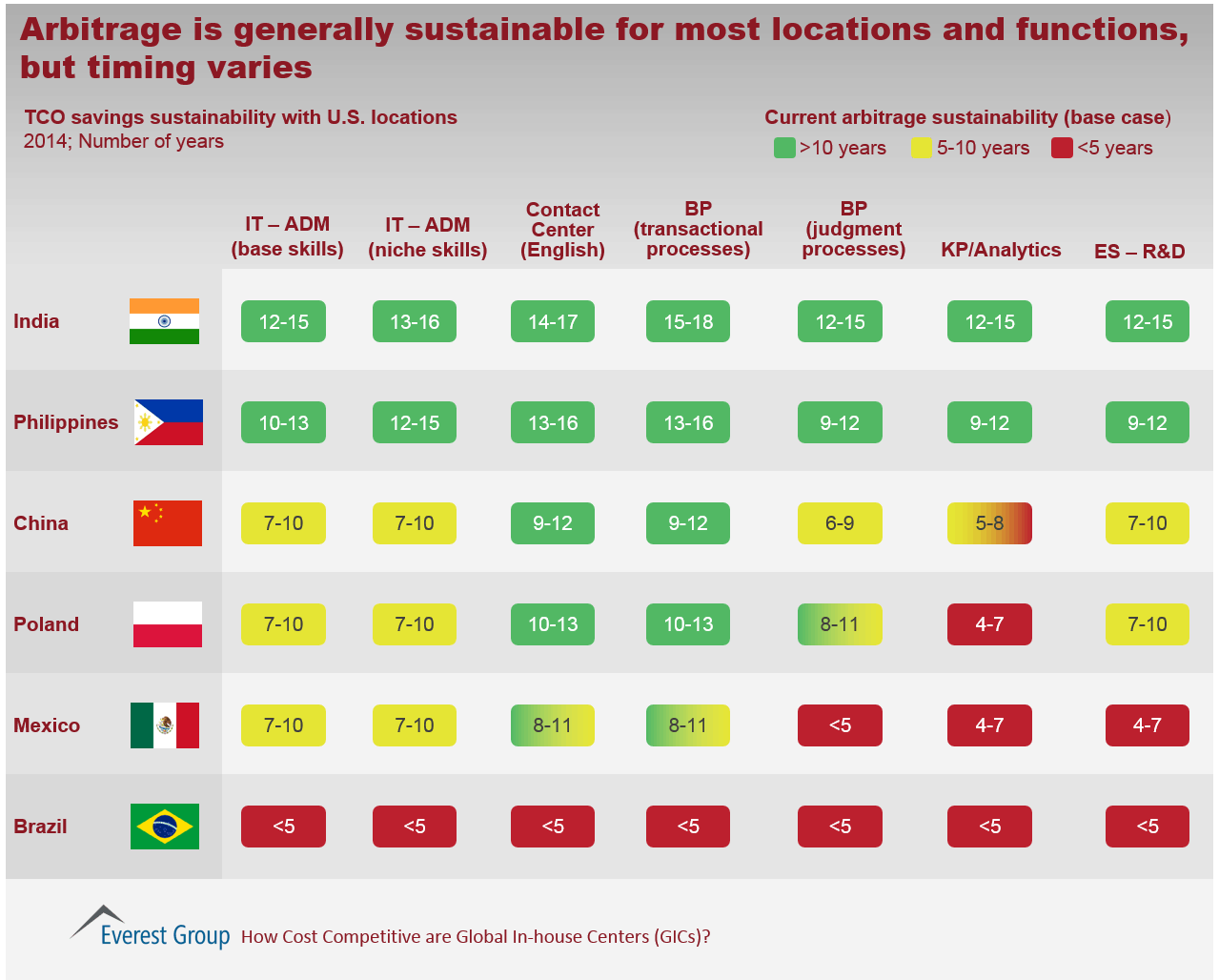 Arbitrage is generally sustainable for most locations and functions, but timing varies 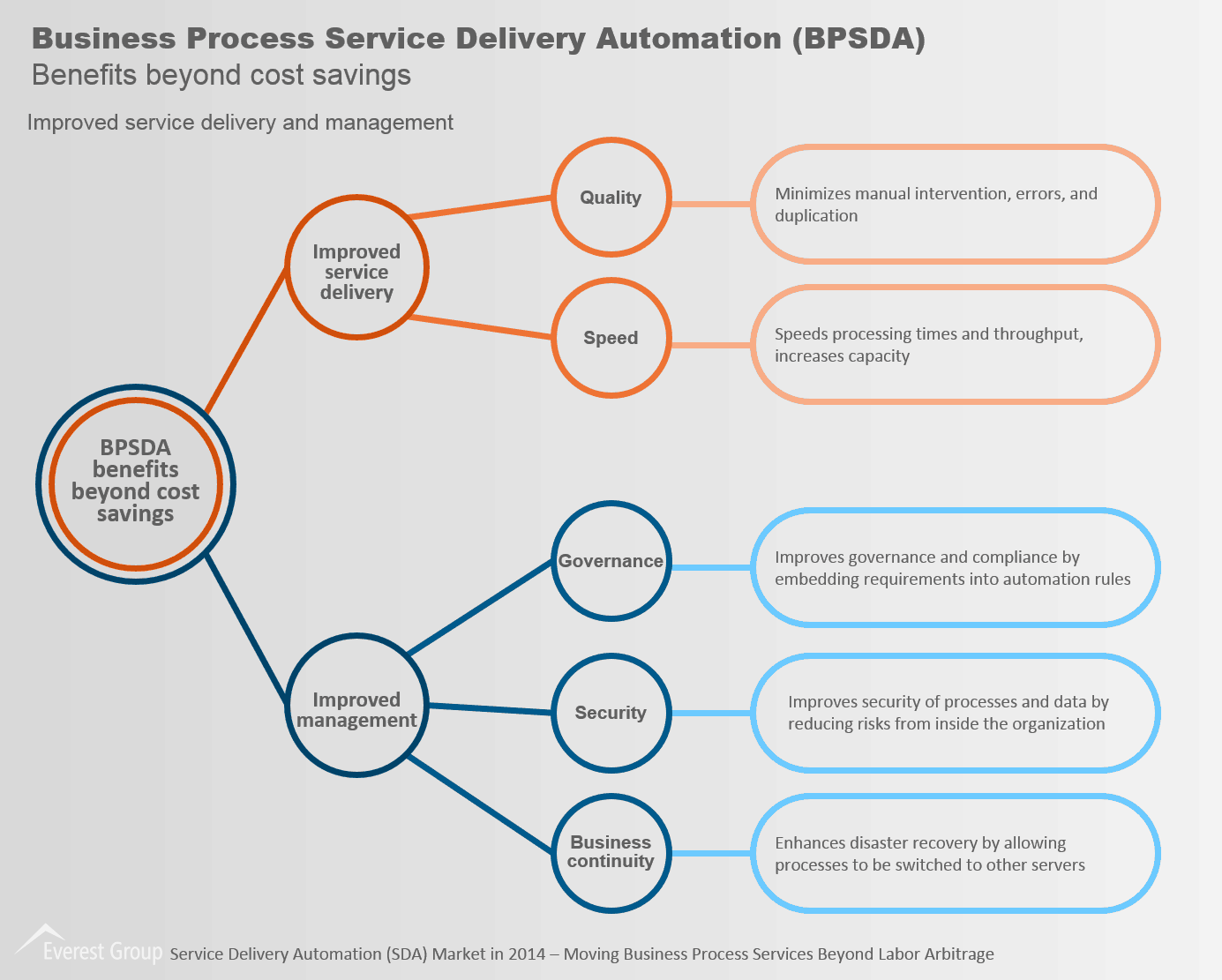