Practice Director Ronak Doshi will be speaking at the 2018 NASSCOM BPM Strategy Summit held on October 4-5 in Bengaluru, India. Ronak will conduct a workshop on the latest developments in blockchain.

This session cuts through the blockchain hype to bring a fact-based perspective on the enterprise blockchain adoption story through a detailed review of 160+ blockchain projects in the financial services industry. You will learn how to prioritize business processes that are more amenable for a blockchain-based solution along with best practices to build a business case for all ecosystem participants. The session will also explore the convergence of technologies such as BPM, RPA, AI, IoT, and blockchain using case studies.

There is no doubt that a successful digital transformation strategy is key to safeguarding your company’s future. Automation, artificial intelligence (AI), robotic process automation (RPA), and cognitive technologies promise huge improvements and efficiencies from the time we source our raw materials to our engagement with our end customers. A pragmatic approach to business process management (BPM) promises to further improve efficiency, foster innovation, boost customer satisfaction, tighten governance, further mitigate against risk, and, importantly, reduce the cost of business operations. How do we ensure we are ready to make the most of a successful digital transformation?

Everest Group is the Strategic Partner of NASSCOM’s 8th annual Global Capability Centers Conclave, Leading the New Normal: Speed, Smart & Skill, held in Mumbai on April 26 & 27, 2018. Visit our experts and analyst at Stall #7 during the event.

Global In-house Centers (GICs) are showing strategic leadership in supporting and driving the enterprise agenda. By pushing boundaries and driving innovation, they have evolved into powerful Global Capability Centers (GCCs).

However, today unprecedented digital disruption is pushing GCCs to provide transformational value to the enterprise, driven by GCCs’ ability to own business accountability, increase impact in core business functions, build deep talent expertise, adopt and lead in digital, and be agile in whatever they do.

This 8th meeting of the Conclave will present attendees with the latest thought leadership on how global enterprise GCCs are enabling adaptive enterprises, and share lessons learned from those who are delivering enhanced value in the new paradigm.

Enterprises are increasingly looking to analytics to achieve top line impacts – think marketing and pricing analytics to support new product launches and better understand consumer behavior – and positive contributions to their bottom line through, for example, risk and fraud analytics. And they’re increasingly favoring GICs over third-party providers to support their analytics initiatives.

Why? By the nature of their engagement model, GICs are tightly integrated with the parent organization, which better enables the high levels of governance and management that are essential to deliver analytics services. GICs also have an edge as they can bundle analytics services into the business process services they deliver to provide integrated solutions.

Here are just a handful of examples of the types of value GICs are delivering to their parent companies.

How GICs Can Jumpstart Their Analytics Capabilities

Of course, the quality of the analytics and the impact of the resulting outcomes are directly related to the analytics talent the GIC employs.

Some GICs have chosen to upskill and reskill their existing workforce. While one has made it mandatory for select teams to undergo analytics courses and training, others have provided monetary incentives to team members who willingly opt into the training. Both approaches make GICs talent-ready to deliver analytics capabilities and face demand fluctuations. GICs are also exploring partnerships with specialist firms that can provide resources for a short duration, as needed.

To deliver even greater value, many GICs are proactively identifying areas within their operations to plug-in the analytics layer. To facilitate this, they have established analytics as a shared horizontal capability in their organization structure so that the skills and knowledge attained from one team can be leveraged by others. Further, GICs are heavily investing in training data scientists, and providing them global exposure to understand business needs better.

The days of providing just arbitrage are long gone. If your GIC wants to deliver the value your parent company needs in today’s business environment, analytics capabilities must enter into your equation.

To learn more about our view on GICs’ analytics capabilities, be sure to attend our sessions at the NASSCOM GIC Conclave (note, Everest Group is the Strategy Partner for the event) and visit us at Stall 7.

Founder and CEO Peter Bendor-Samuel will be a key panel speaker at WCIT India & NASSCOM’s Amplify Digital Forum: Embedding Digital: DevOps, Automation and Cloud. The event is held on February 19-21 in Hyderabad, India. Peter will speak on how organizations can best pursue scaling up new digital technologies, such as Cloud, DevOps, and Automation, in the age of digital transformation.

At the Economic Times Roundtable held at Nasscom’s BPM Strategy event, top executives of Indian business process management companies talked about how they have managed the disruption that automation brings and what the IT industry could learn from them.

Chief Research Guru Michel Janssen will be a featured speaker at the NASSCOM 2017 BPM Summit event held on September 12-13 in Bangalore, India.

In this session, attendees will learn the results from Everest Group’s soon-to-be-release Best-in-Class Enterprise Digital Analysis, which quantifies with real data what it takes to achieve best-in-class – in terms of outcomes, as well as the corresponding capabilities needed to deploy digital strategies and initiatives. The session will include specific metrics on how much best-in-class enterprises invest in digital initiatives; how much the spend is growing; and how best to measure success.

In addition to sharing the Top 10 capabilities that the Best-in-Class have that their peers do not, we’ll bring the data to life with case studies of enterprises that have achieved the Best-in-Class ranking. Finally, we’ll share insights on the opportunities these digital journeys are creating for the BPS industry and how the industry needs to evolve to capitalize on the need of enterprises to meet today’s digital benchmark.

Learn more and register to attend

I think the annual NASSCOM conference is always a great time. I get to catch up with old friends, at least one-third of the Indian service providers industry’s leadership attends and it’s an insightful venue for capturing the mood of the industry’s providers. This year the mood was more somber and more reflective than in past years. The Indian service provider industry is clearly grappling with several issues.

The first issue is the deceleration in growth. The industry has had four straight quarters of deceleration. Last quarter, the industry grew at 3.1 percent, and the top five Indian firms grew at 7.7 percent. This is the lowest level of growth the Indian service provider industry has ever experienced. This decelerating growth is worrisome.

The inconvenient fact around this digital journey effort is that digital services are less than the mature arbitrage work. Therefore, the faster a provider’s business grows in digital, the more it stresses its arbitrage-first margins.

Activist Shareholders are a Complicating Factor for Growth

The Elliot thesis complicates service providers’ business. Now they are not just struggling with how to rotate into digital but also the need to placate their shareholders at the same time. Returning cash to shareholders complicates the digital journey in that it results in less cash available to accelerate their journey by buying digital companies and making other digital investments.

That’s the background to the somberness I observed. There’s no denying it’s a tough time for the industry. But recent complicating events raised the stakes: The Trump effect and Brexit are causing a slowdown or pause in globalization.

The talk of the halls at the conference was the Trump effect. It’s very clear that the arbitrage-first industry is facing numerous instances in which companies are delaying or potentially cancelling offshoring/arbitrage initiatives. An additional concern is that some companies may decide to repatriate offshored services, while others may take a fig leaf or olive branch strategy, moving some work back onshore and thus focusing the media on their investment in US jobs.

Balanced against the factors causing the sobering times for the Indian service provider industry is the bright prospect of a digital-first future. The industry firmly believes that there is significant growth in a digital-first future and that it will not necessarily be without labor arbitrage. Providers believe their digital-first future will pivot to their value being based on the disruptive digital technologies and capabilities, but they will be able to further enhance that by deploying their robust talent coming out of India on an affordable basis.

So, there is some hope, despite the mature arbitrage market and the slowdown or pause in globalization. However, there are real concerns around managing the rotation into digital as well as the impact on profit margins. Certainly, there is substantial uncertainty around at least the short-term prospects for the industry – enough uncertainty in the picture that NASSCOM decided to postpone its annual forecast for the Indian services industry.

Join Everest Group leaders and analysts at the 2017 NASSCOM India Leadership Forum, February 15 -17. On February 16, Everest Group CEO and Founder Peter Bendor-Samuel will lead a presentation titled, Demystifying Innovation: What, Why, Who, and How – An Enterprise Perspective. The discussion will highlight findings from Everest Group’s recent study with 100+ CIOs on innovation in global services and will answer key questions like, what is innovation and why does it matter to enterprises? Where does innovation create the most impact? How do enterprises measure the impact of innovation? Who is best suited to deliver innovation (a supply-model comparison)?

Peter Bendor-Samuel
CEO and Founder, Everest Group
Presentation will is on February 16 in Board Room I
Time: 6:00 – 7:00 pm IST

Everest Group is the Content Partner at the NASSCOM GIC Conference North: Future Proofing Your GICs through Digital and RPA.  At this event, Everest Group Partner H. Karthik will be the key speaker for a session titled, The Theme and What You Can Expect. He will also be the moderator for a discussion titled Crystal Ball Gazing – The Future of GICs in the Digital ERA.  Partner Rajesh Ranjan will be the moderator for a session host a case study session titled Breaking Ground – How I Did It for RPA.

Digital technologies are fundamentally changing the demand ethos of the US$75 billion Engineering and Research and Development (ER&D) global sourcing market, which is expected to grow at a CAGR of more than 18 percent over the next five years. With rapidly evolving consumer needs, an increase in global regulatory pressures, the rise of the shared economy, increasingly complex security needs, and technology’s shift from enabler to disruptor, following are the major themes I expect to dominate the NASSCOM Design and Engineering Summit 2016, which is being held in Bangalore on October 5 and 6:

I look forward to interesting discussions on these and other topics with the engineering services enterprises and vendors during the #NASSCOM Design and Engineering Summit. If you’re there in person, feel free to contact me or my colleagues H Karthik and Bhawesh Tiwari.

Click here to read about Everest Group’s latest research on the engineering services global talent spot, and here, here, and here to check out detailed insights from this research. 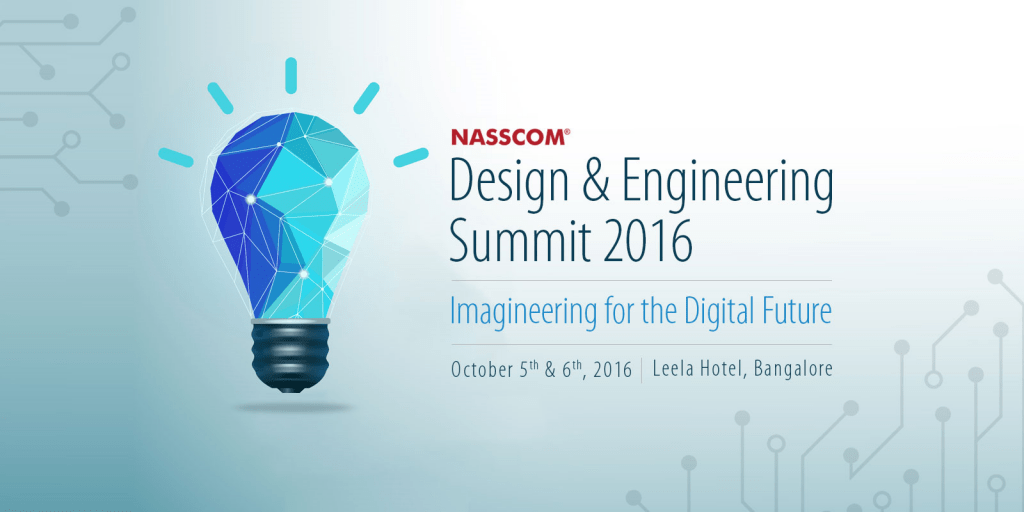