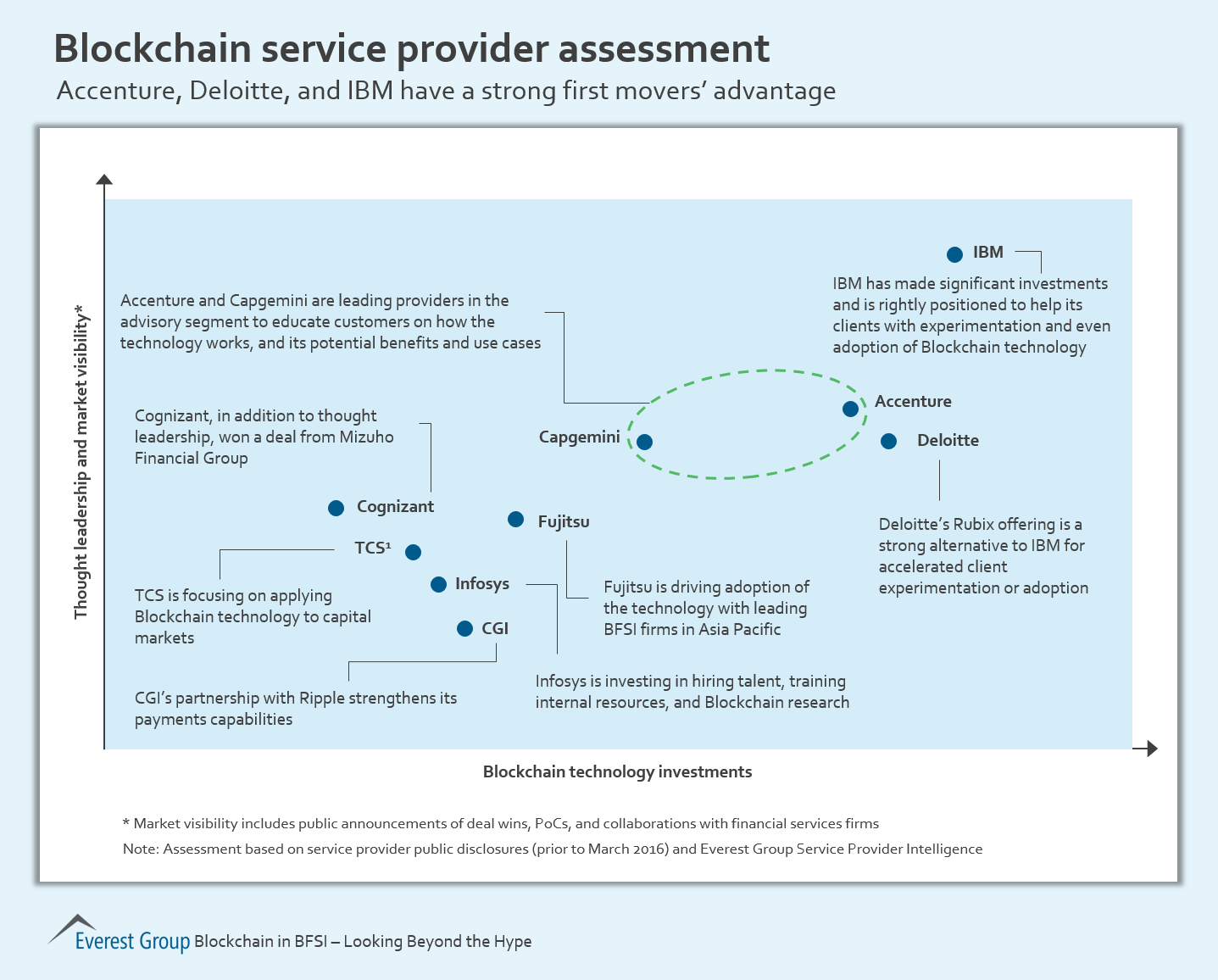 Accenture, Deloitte, and IBM have a strong first movers’ advantage 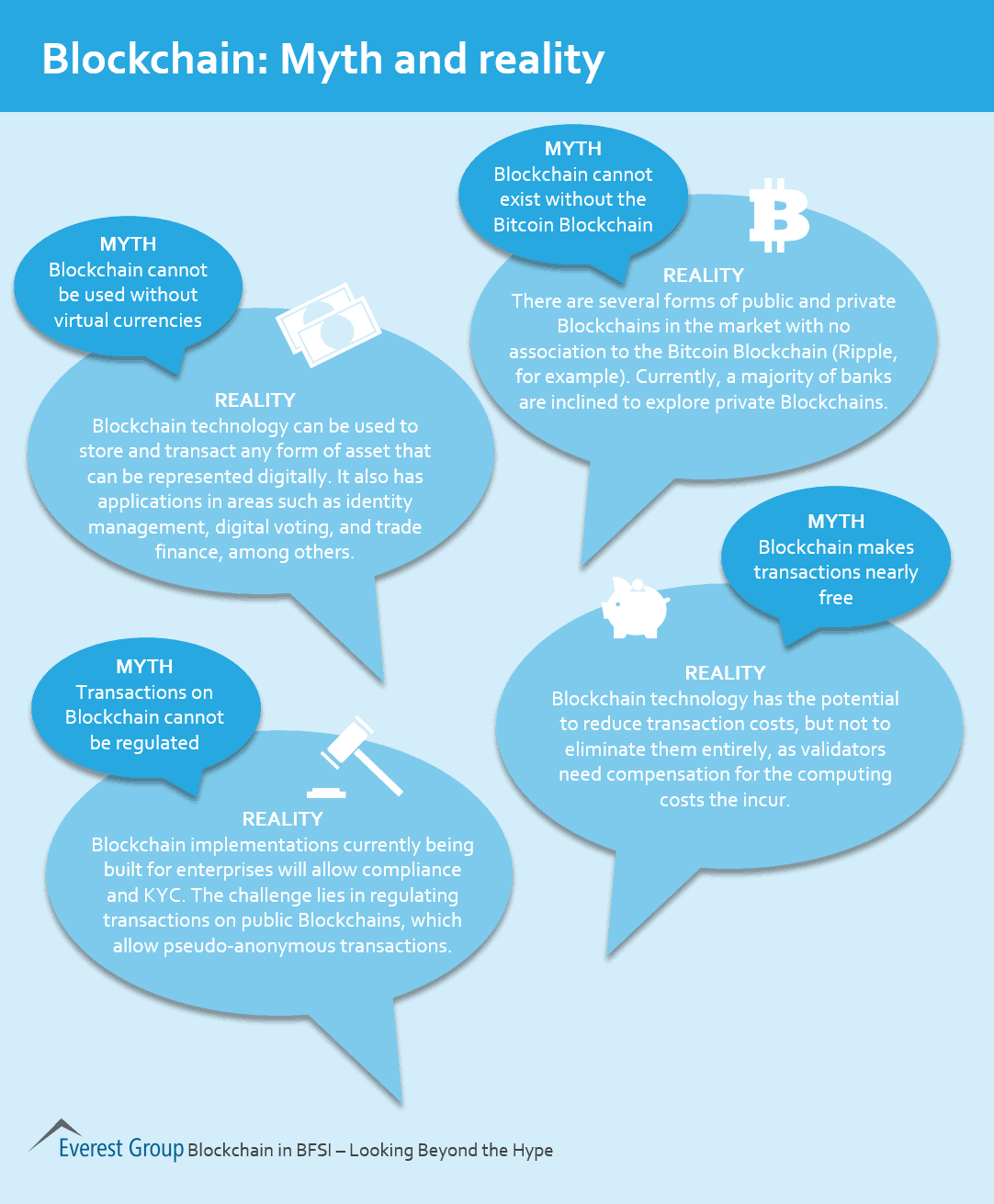 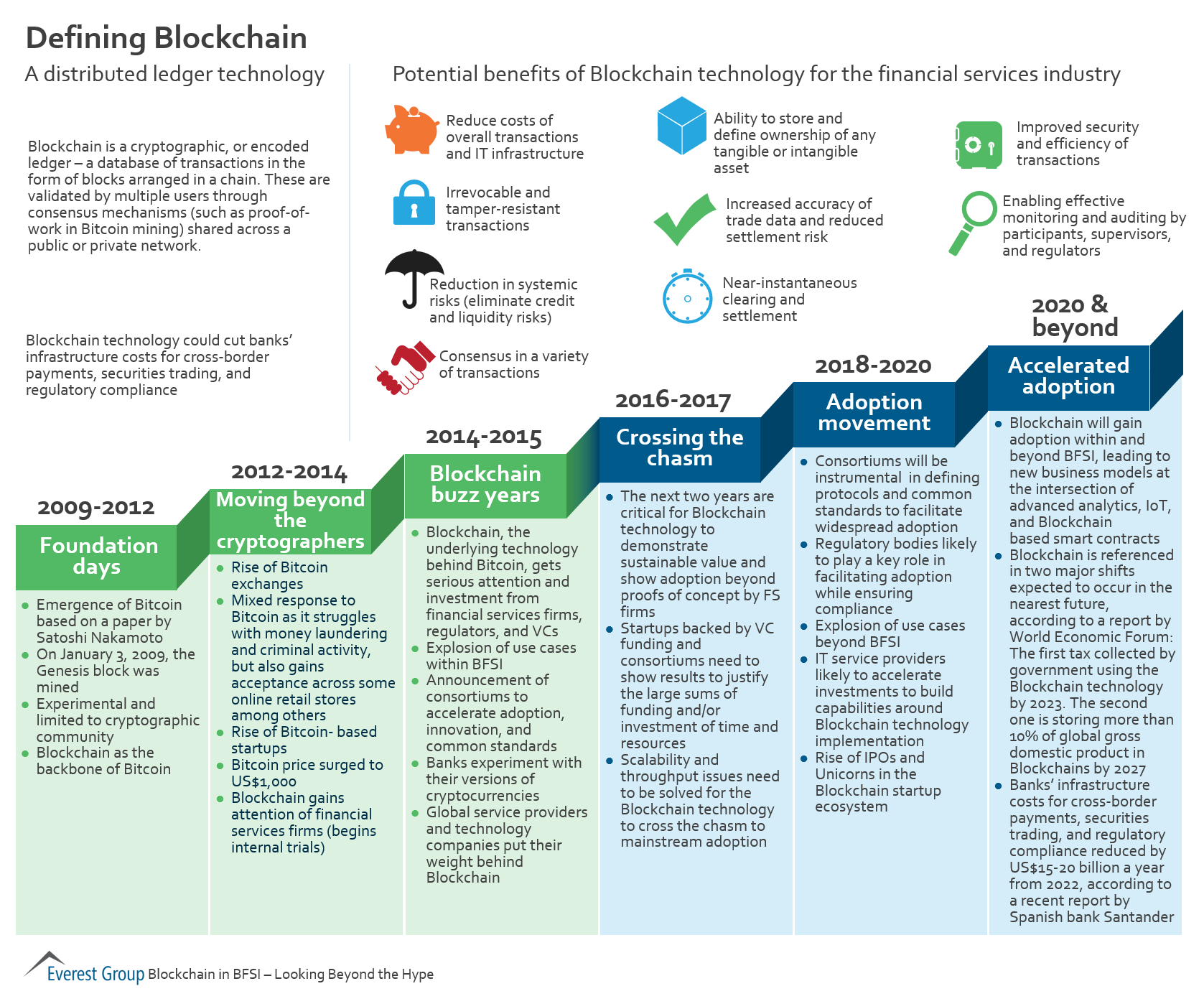 Blockchain is a cryptographic, or encoded ledger – a database of transactions in the form of blocks arranged in a chain. These are validated by multiple users through consensus mechanisms (such as proof-of-work in Bitcoin mining) shared across a public or private network. 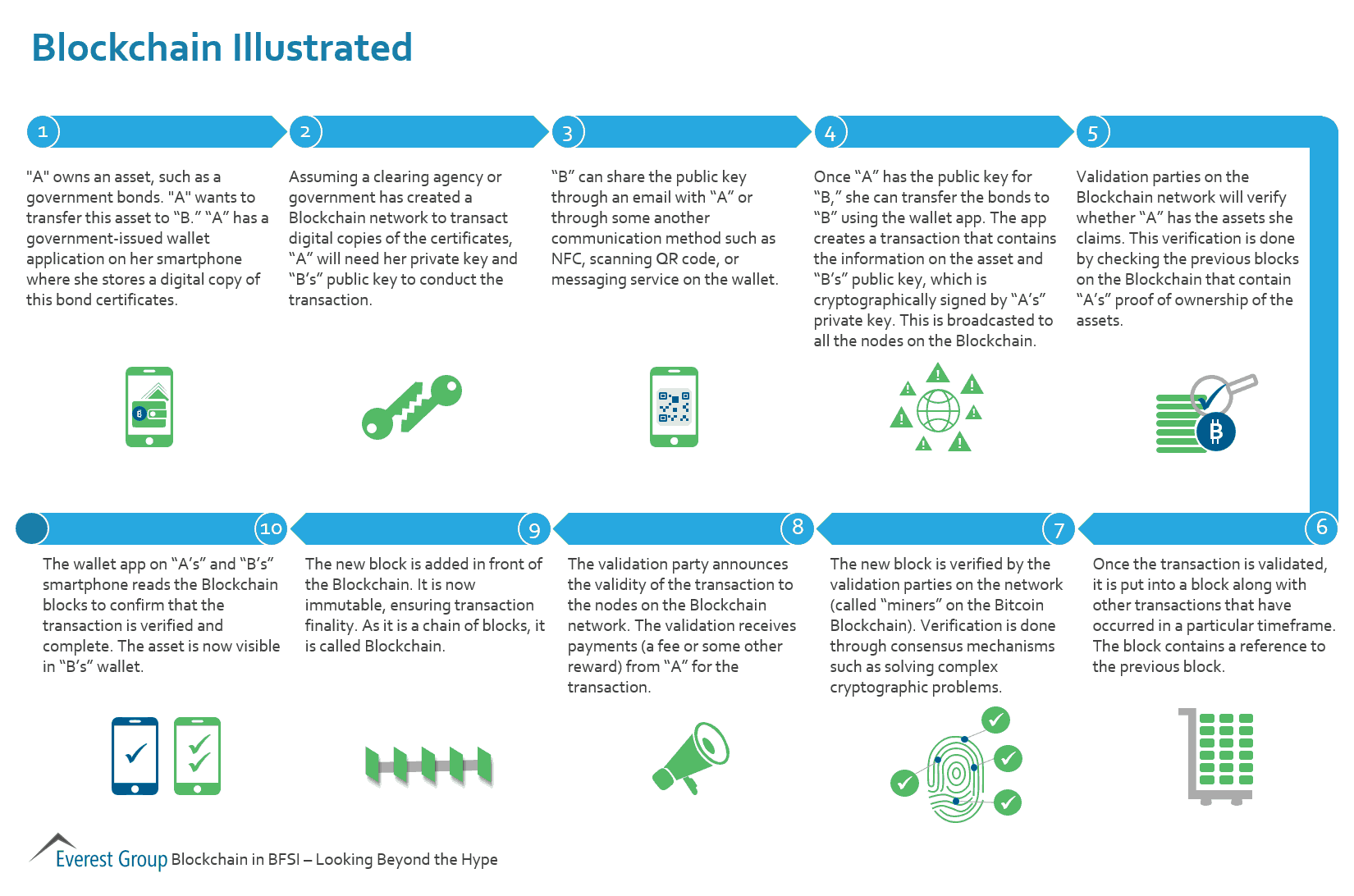 10 steps to how blockchain technologies work

Blockchain Use in BFSI | Market Insights™ 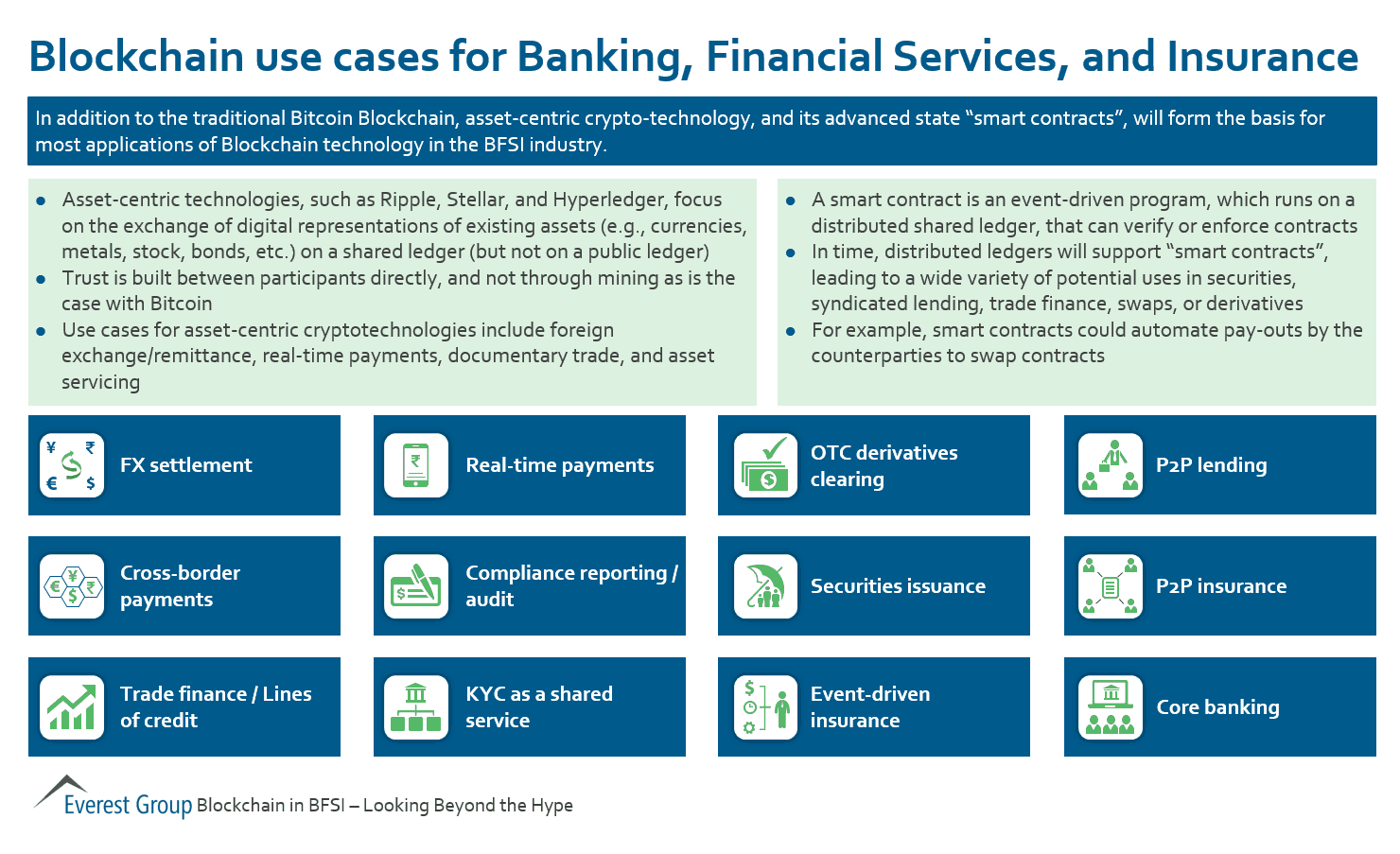 In addition to the traditional Bitcoin Blockchain, asset-centric crypto-technology, and its advanced state “smart contracts”, will form the basis for most applications of Blockchain technology in the BFSI industry.

2015 Was Blockchain’s Buzz Year: Will 2017 Be the Year of Blockchain in Action?| Sherpas in Blue Shirts

Though cryptocurrencies such as Bitcoin have received mixed responses from the financial services industry, the underlying distributed ledger technology, blockchain, received a lot of positive buzz in 2015. If it lives up to the hype, blockchain has the potential to deliver significant transaction cost savings – including for inter-bank transactions, foreign exchange trading, maintaining digital records of diamonds, digital transfer for ownership of assets, and near real time securities settlement – and the ability to make secure, efficient, near real-time settlements. Further, the decentralized nature of the ledger backed by multiple miners make the transactions immutable.

Here are some examples of why I call 2015 blockchain’s buzz year.

Consortiums of banks, technology companies, and start-ups came together to work on blockchain’s proof of concepts (PoCs) for the financial services industry. The level of collaboration being witnessed in the industry points to the simple fact that the blockchain technology cannot gain widespread adoption and faster time-to-market without common technology and process standards:

Financial services enterprises not only doing R&D internally, but also partnering with Fintech startups to develop blockchain’s PoCs to explore use cases for this new technology. In 2015, banks and banking firms (such as Bank of America and Goldman Sachs) have filed patents in the blockchain technology space:

Fintech startups are changing the game

In the IT service provider space:

Blockchain as a service:

What can we expect from the Blockchain technology space in 2016?

What do you think? Will blockchain pass the 2016 litmus test, making 2017 the year of Blockchain in action?