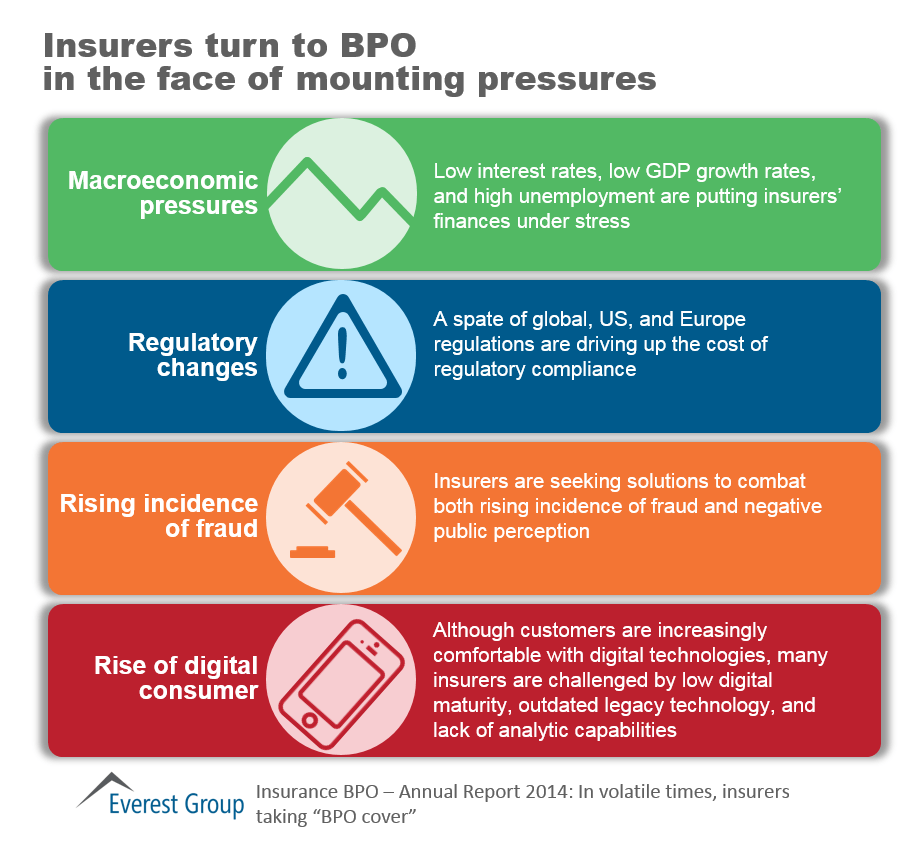 Insurers turn to BPO in the face of mounting pressures from macroeconomic and regulatory changes, rising fraud, and increased digital demand from customers 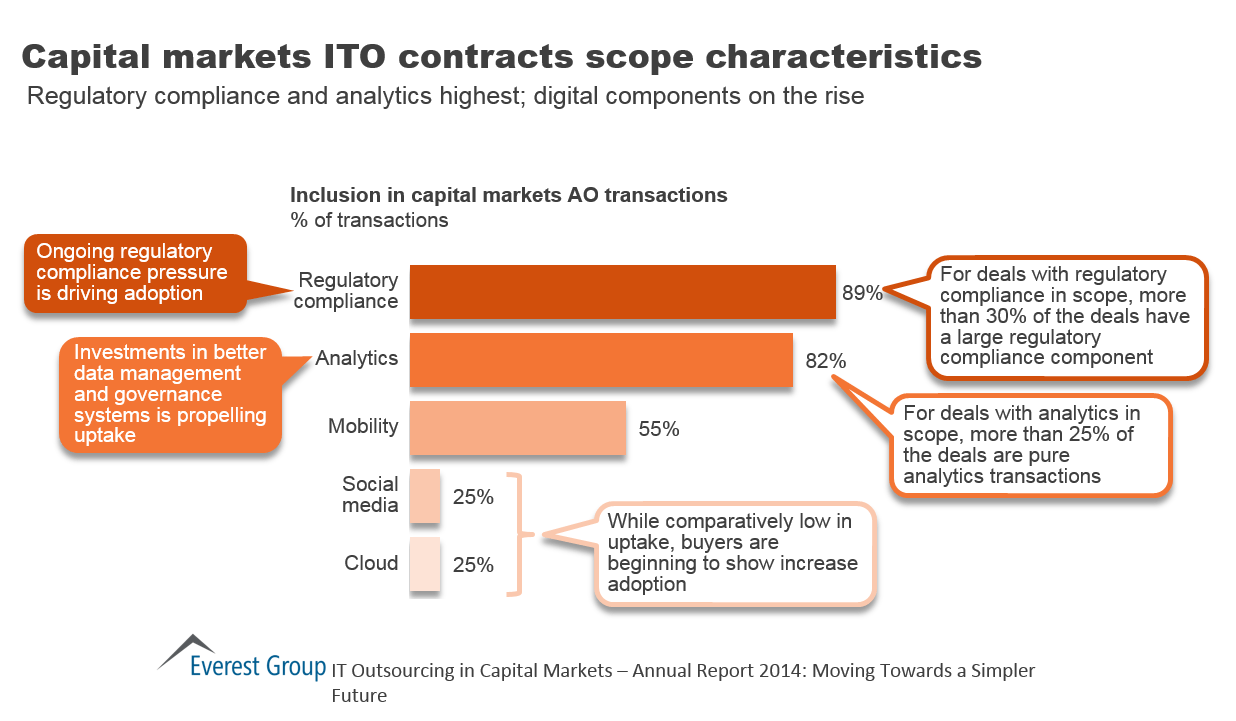 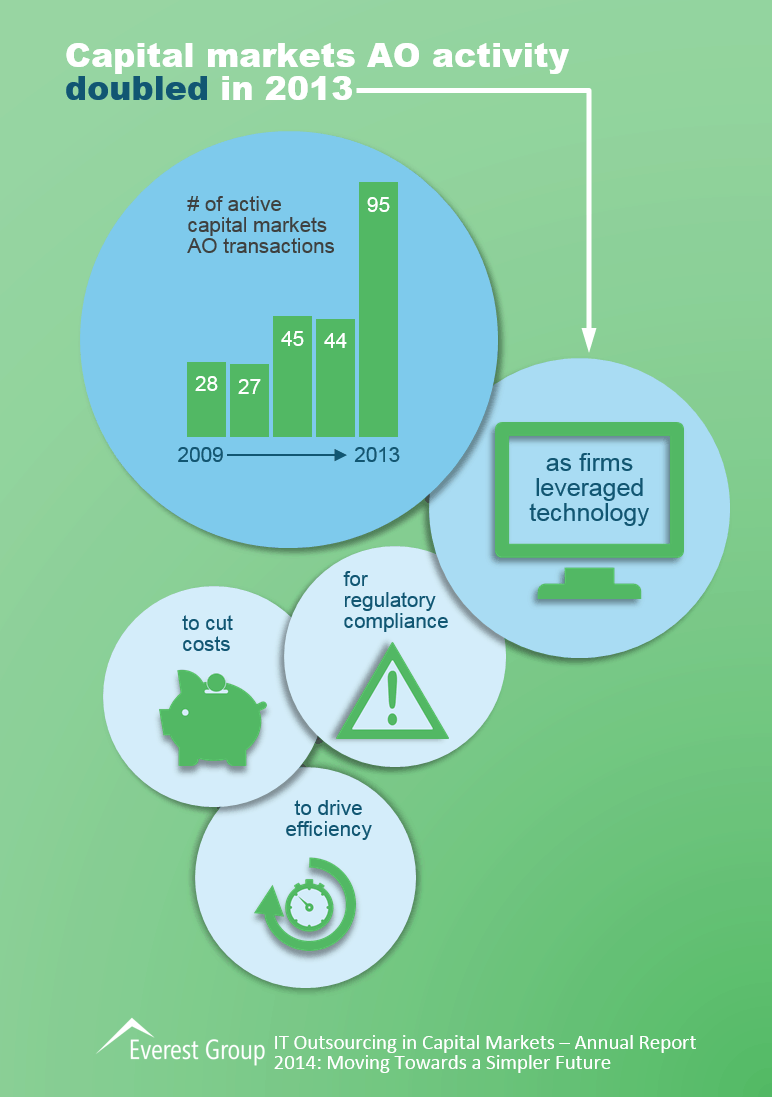 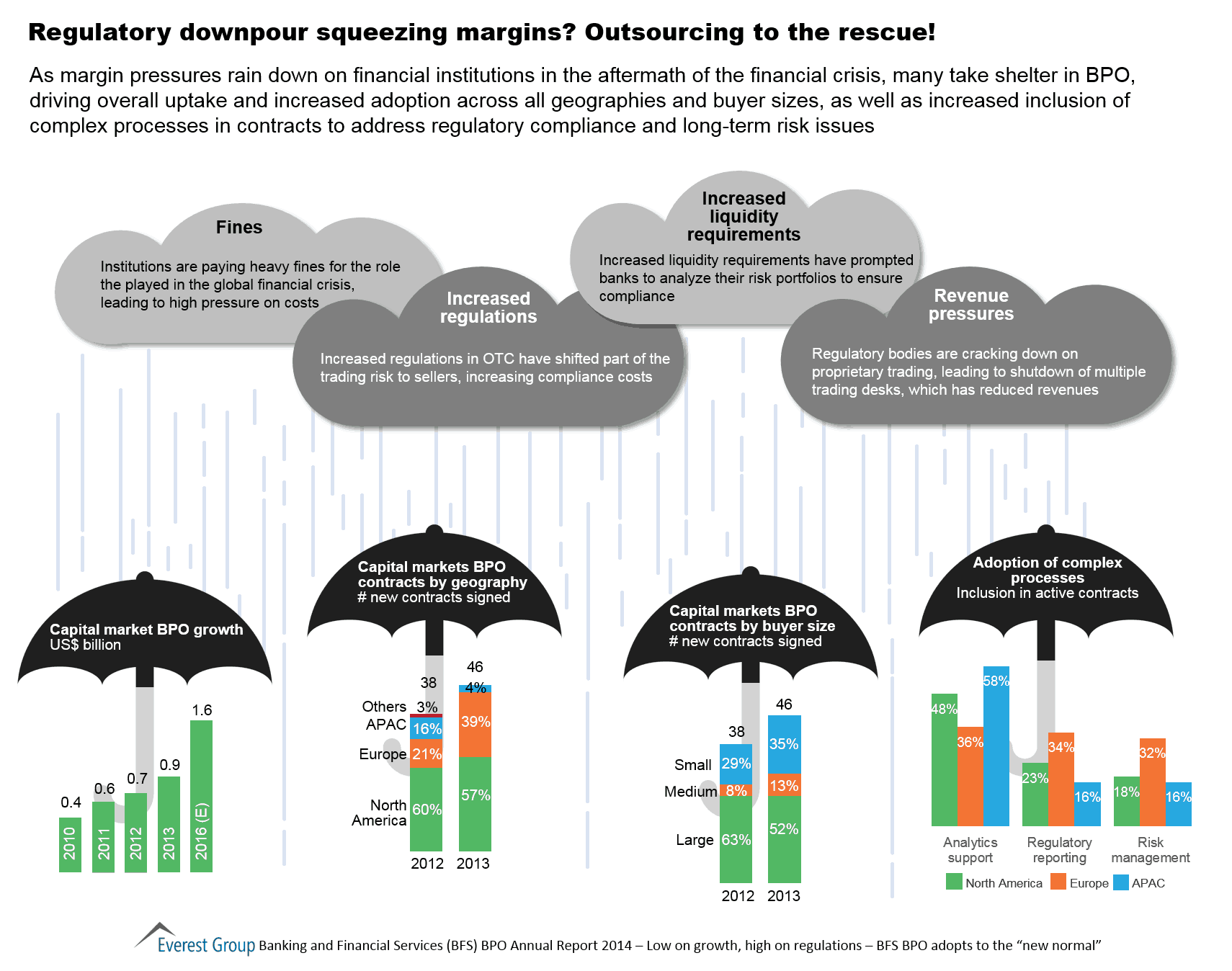 As margin pressures rain down on financial institutions in the aftermath of the financial crisis, many take shelter in BPO, driving overall uptake and increased adoption across all geographies and buyer sizes, as well as increased inclusion of complex processes in contracts to address regulatory compliance and long-term risk issues

Will the Fed’s New Posture Have a Material Impact on the Global Services Industry? | Sherpas in Blue Shirts

After many years of reviewing and thinking through the implications, the Federal Reserve last week issued guidance to banks about the extent of their use of outsourcing. As The Wall Street Journal reported, the Fed raised red flags about state banks and bank holding companies using third-party service providers for information technology and bank operations.

The Fed’s warning stated that “the guidance does not discourage financial institutions from outsourcing activities to service providers, but says firms should be aware of the potential risks.” The warning cited reputational risks as well as legal risks. And it follows on the heels of a similar warning issued to national banks by the Office of the Comptroller of the Currency.

At Everest Group we are already aware of a number of large financial institutions that were already taking steps to reevaluate the degree to which they use third parties, and we believe this new regulatory guidance will push them further down that path.

Where will the work go?

We don’t believe that there will be a mass movement of work from India back to the United States and Europe. However, we believe that much of this work will move into already existing GICs (Global In-house Centers).

Beyond the regulatory pressure, we see a number of reasons for banks moving their work to GICs.  Most notably, many banks now feel it’s easier to drive increased productivity when they own the resources rather than third-party providers owning them. They also experienced control issues in outsourcing relationships.

Extent of the impact

With the Fed’s warning about risks coming at a time when banks were taking a step back from outsourcing because of productivity and control issues, we believe it will drive other financial institutions to join the trend of reevaluating their use of outsourcing.

Given that the financial services segment is the largest and most profitable segment for the third-party providers, we believe this Fed warning could become quite significant in importance and impact on the services industry.

Infosys Moves On, But There Are Chilling Immigration Reform Implications for Others in the Industry | Sherpas in Blue Shirts

The U.S. federal government this week announced a settlement agreement with Infosys with a record fine of $34 million — a penalty Infosys agreed to pay in settlement of the investigation related to its I-9 paperwork errors and H1-B and B-1 visa matters. There is both good news and bad news in this settlement. The bad news reaches beyond the Indian heritage firms and affects the entire industry, including multinationals as well as firms that hold GICs, or captives, or have international work.

From an Infosys perspective the settlement is good news. It allows Infosys to move on, and undoubtedly its management and stockholders are breathing a deep sigh of relief at finally being able to get beyond these immigration issues overhanging operations during the ongoing investigation. There were no criminal charges nor an admission to criminal activity as to the way it brought foreign nationals into the United States to perform work for customers,  but Infosys agreed that it failed to maintain accurate I-9 records for many of its foreign nationals in the United States in 2010 and 2011 as required by law.

The settlement involves putting audits and other compliance proofs in place. These measures and the agreement finding no criminal wrongdoing will help Infosys to move on and will help resolve concerns of customers, especially those in the financial services space, which are very gun-shy of attracting any more regulatory scrutiny.

Although the $34 million penalty is a record fine, Infosys can be pleased that it is small compared to its earnings and will be largely immaterial on earnings.

On the downside, I think the picture for the broader industry is clouded and even chilling. While Infosys is able to move on, the hoped-for relaxing of visa reform has not arrived. Instead, this settlement indicates that a more intense regulatory environment awaits industry players.

The record fine foreshadows ongoing scrutiny of the visas in general and indicates that the immigration authorities are taking, and in the future, will likely take a very narrow view of how service providers can use visas.

It’s interesting to note that the language currently governing the visas is quite ambiguous, and reasonable people could easily differ in their interpretation. But this settlement and record fine signals that a very narrow interpretation will be used going forward and that the government will use penalties to enforce the regulations.

The forceful, negative response of Congress and Senator Grassley’s reaction (“It’s time that the administration and Congress do more to rein in the fraud and abuse to ensure that both American and foreign workers are protected.”) to the settlement is another indicator of bad news for companies that utilize talent outside the U.S. Rather than celebrating a victory for compliance and the significant enforcement of of law, they are dissatisfied with the outcome and are calling for further regulation.

The Congressional reaction is ominous. It does not bode bode well for future legislation and certainly encourages the bureaucrats in the immigration service to take a very narrow view of visas going forward.

On June 28, 2012, the United States Supreme Court provided its much awaited ruling on the Patient Protection and Affordable Care Act. In what is considered a surprise judgment by many quarters, the Court upheld almost all provisions of the law passed in 2010.

Here is how the court ruled on the two key provisions that generated the most debate – the “individual mandate” and the challenge by the states for the expansion of Medicaid program:

So, what impact will the Supreme Court ruling have on the outsourcing / global sourcing activity in the healthcare vertical? Will we see a surge in demand and see activity accelerate now that the uncertainty surrounding the law is now over? Three reasons why we believe that the Supreme Court ruling does not suggest any short-term (i.e., in 2012) acceleration in outsourcing activity in the healthcare vertical:

The above is not to suggest that outsourcing / technology innovation activity in the healthcare vertical has reached its peak. If President Obama wins the election, we are likely to see a surge of activity as companies prepare for the 2014 initiatives. Even a number of current bystanders will jump in the fray to ensure compliance with regulatory reform. On the other hand, a repeal could significantly alter outsourcing activity and potentially even jeopardize existing initiatives if Mitt Romney is successful!

As it pertains to uncertainty in the healthcare markets, is this the beginning of the end, or the end of the beginning? Only time, and the results of the presidential election will tell….

Cloud Beyond the Borders – Part 2: Europe | Gaining Altitude in the Cloud

In Part 1 of this blog series, we talked about cloud computing drivers and challenges in Asia. This time Europe is our beyond the borders cloud viewing destination.

Europe does not face many of the hindrances to cloud adoption that developing countries do. European power supplies are reliable, it has excellent data connectivity to the world, and the rule of law prevails. But regulatory issues remain.

Even though Europe is a common market, its 27 member states do not have a regulatory regime that provides a coherent EU-wide backdrop for cloud computing. The example I used in my blog on cloud computing in Asia that cited Indonesian’s data in Singapore or China applies just as well to German’s data in French and British data centers. Service providers, including Microsoft, HP, IBM, and Google, are joined by customers in leading an increasingly loud call for enactment of a coherent regulatory regime. Neelie Kroes, Vice President of the European Commission responsible for the Digital Agenda for Europe, has made this a priority for her office. Still, according to Per Dahlberg, CEO of the Asia Cloud Computing Association, Europe, in general, is about 18 months behind the United States in enterprise cloud adoption, putting it squarely between the United States and Asia.

In an interesting twist, European cloud providers are realizing that strong data protection laws may provide a competitive advantage over established U.S. players. In June 2011, Microsoft announced that, as a U.S.-based company, the Patriot Act requires it to release data to the U.S. government, upon request, without regard to where in the world Microsoft has stored that data. Soon after, several companies in North America and Europe, including defense contractor BAE Systems, Royal Dutch Shell, and the provincial health insurance system of British Columbia, announced they would cancel contracts with U.S.-based cloud services providers. Royal Dutch Shell moved its cloud data storage from Microsoft to a German firm, T-Systems. As T-Systems’ CEO  Reinhard Clemens told reporters, “The Americans say that no matter what happens, I’ll release the data to the government if I’m forced to do so, from anywhere in the world. That’s why we’re well-positioned if we can say we’re a European provider in a European legal sphere and no American can get to them.”

Despite Europe’s competitive advantages in data protection, a final hindrance seems to be European companies themselves. Informa’s Telecom Cloud Monitor reported that, in 2011, Europe accounted for only seven percent of global investment in the cloud. European firms tend to be much more risk-averse than American or Asian ones, and so far seem to prefer using the IT infrastructure they already have. But as existing systems are retired, and as the EU develops a regulatory framework, there is every reason to expect European firms will join those in the United States and Asia in the cloud.

With its first-rate infrastructure and world-class data protection laws, Europe is poised to be a major participant in the global IT cloud. As European firms realize the competitive advantage of stronger privacy standards in their home countries, American and Asian firms would be wise to learn what standards the market comes to expect.

While North America is projected to maintain a 50 percent share of cloud investment in the next several years, rapidly rising interest and capability will fuel investment in Europe – and Asia. These are driven by a variety of factors including broadband penetration, increased mobility, and the need to be globally competitive. But as physical infrastructure develops to meet cloud requirements, cloud uptake everywhere will begin to increasingly hinge on regulatory environments. Specifically, it will require a well-understood framework that defines jurisdiction and data protection. As these questions are settled, companies will soar in the cloud.