The technology sector is the largest consumer of the visa. And about 70 percent of the 85,000 visas issued every year go to Indian workers employed by technology and outsourcing service providers to provide IT services to leading American enterprises.

Such a massive hike in the proposed minimum salary for H-1B visa holders is forcing enterprises and service providers alike to rethink their talent strategy from offshore to onshore. Factors such as adoption of agile methodology and regulatory requirements are also driving up the demand for onsite resources, and those will likely need to be sourced locally from within the U.S. as the landed resource model become challenged.

This increased focus on onshore resources has both enterprises and service providers alike considering the merits of potential U.S. locations. The landscape of IT services delivery from within the U.S. is complex, with more than 150 leverageable locations. The help simplify the view, Everest Group has classified delivery locations in the country into various tiers based on socio-economic status, maturity of IT services delivery, talent availability, and operating costs. 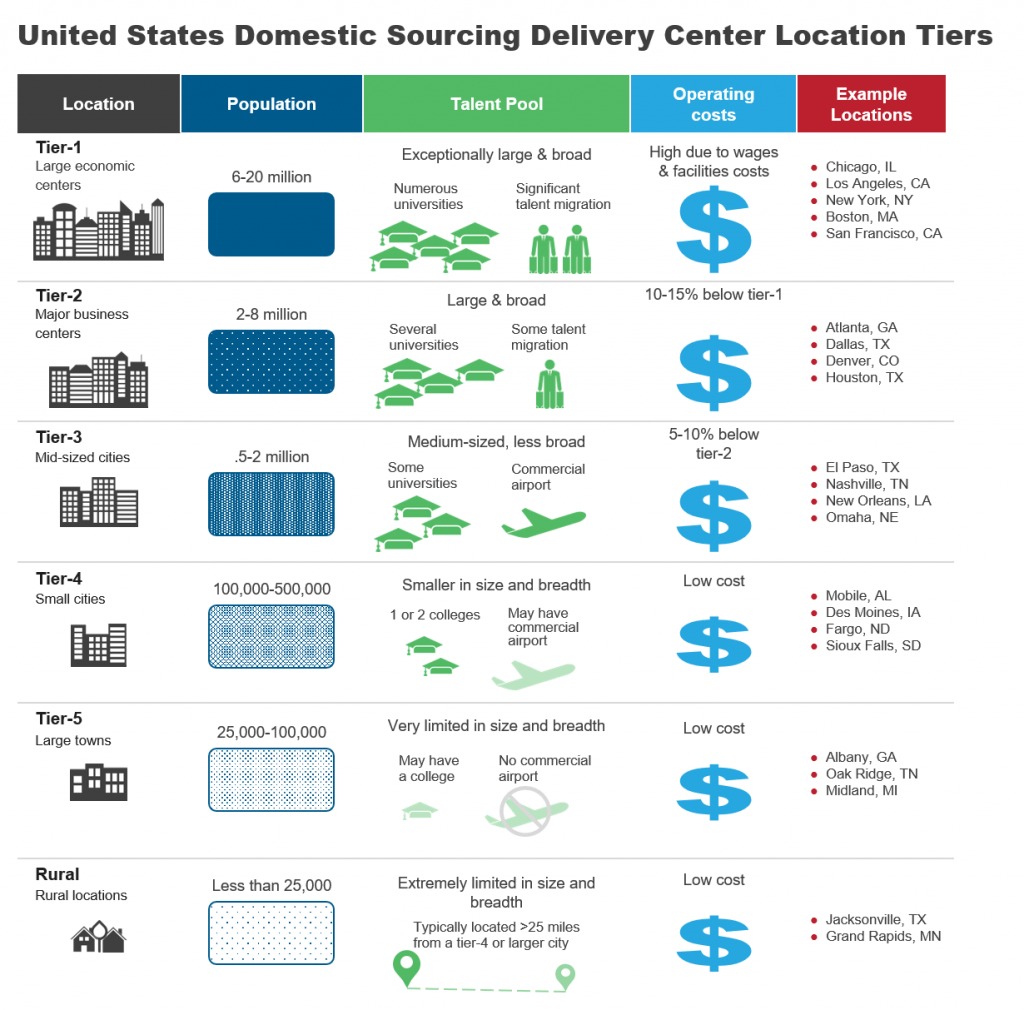 Deciding on the best location for U.S.-based IT services delivery must be based on a business case that considers multiple factors, and perhaps some trade-offs. For example, Tier-2 locations offer the twin advantage of moderate operating cost and breadth and depth of skills, but you might have difficulty attracting resources with extremely specialized skills to move from a Tier-1 city such as San Francisco to Dallas or Atlanta. And although Tier-3 and 4 locations are suitable for low-cost transactional IT services delivery, they may not be appropriate options if you need, or anticipate needing, more advanced skills. 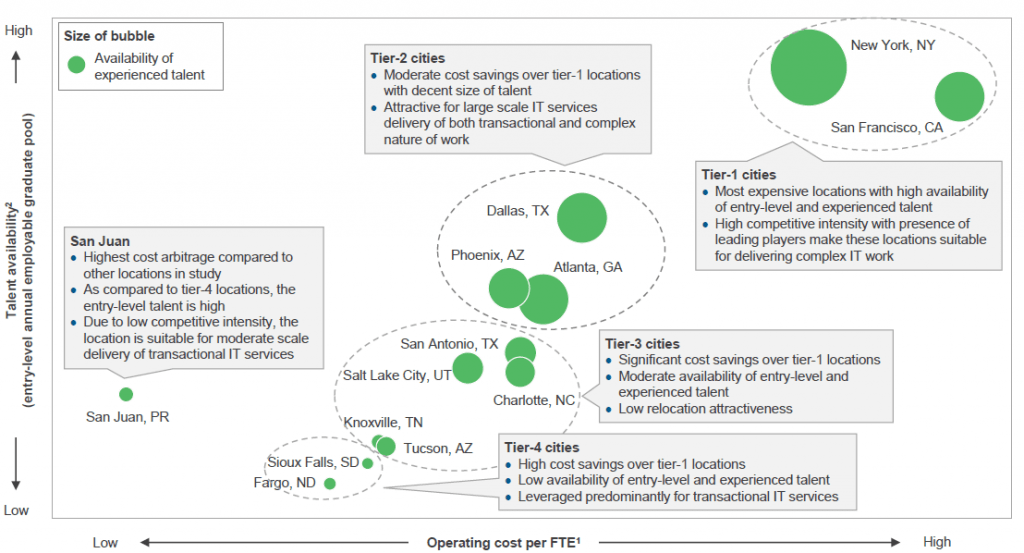 While the proposed legislation hasn’t yet become law, turbulence and disruption of this potential magnitude demands significant research and pre-planning. As Benjamin Franklin, one of the founding fathers of the United States said, “By failing to prepare, you are preparing to fail.”
For more information on this topic, please read the following Everest Group reports. 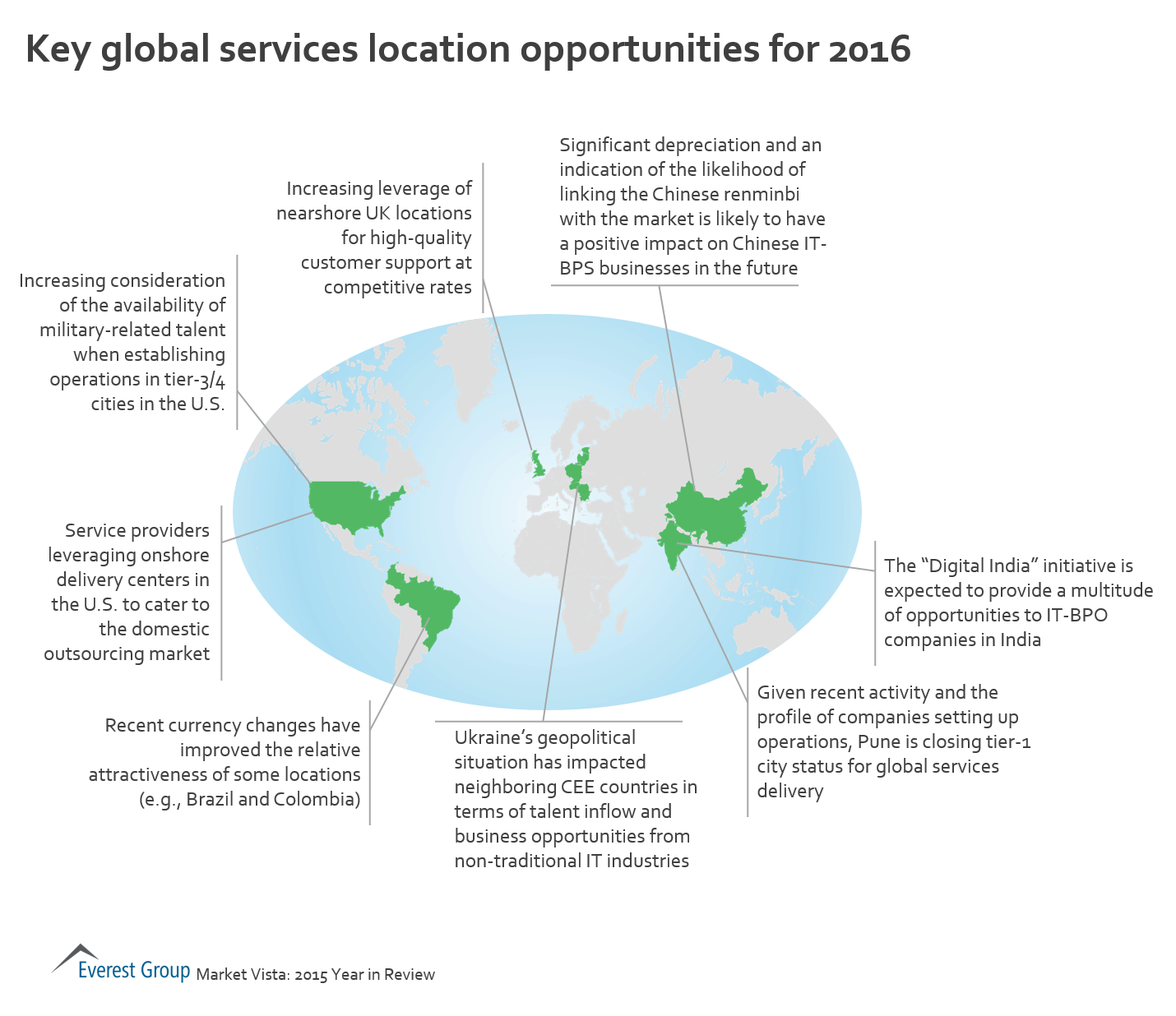 Eric Simonson’s recent blog, “John Mellencamp Named Honorary Everest Group Analyst of the Month,” highlighted the dominance of tier-3 locations in the United Sates for onshore service delivery. Now it’s time to take a look at the tier-5 and rural locations in the U.S., per the North America Domestic Outsourcing location landscape study we recently conducted for RevAmerica, an event focused solely on domestic ITO and BPO sourcing.

Given that places such as Oak Ridge, Tennessee, Albany, Georgia, and Jacksonville, Texas have populations below 100,000, with limited presence of colleges and poor connectivity to commercial airports, one would not expect them to contribute significantly to onshore service delivery. However, our analysis of tier-5 and rural locations revealed five interesting facts. 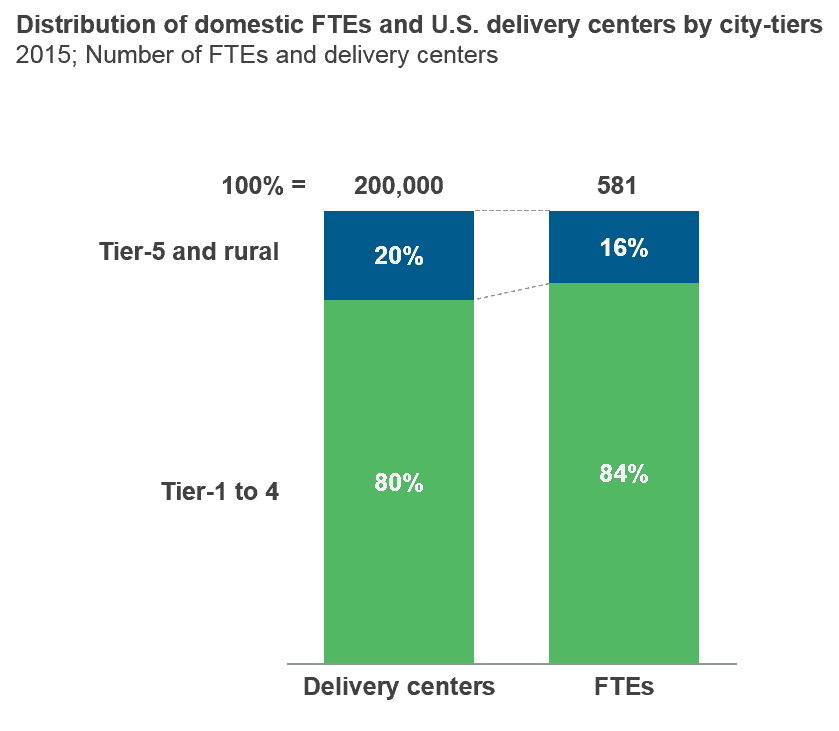 While onshoring in general has been on the rise, the leverage of tier-5 and rural locations has witnessed significant momentum. In the last decade, the number of new delivery center set ups in these locations has increased by ~150 percent, from an average of three centers per year in 2005-2006 to seven centers in 2013-2014. 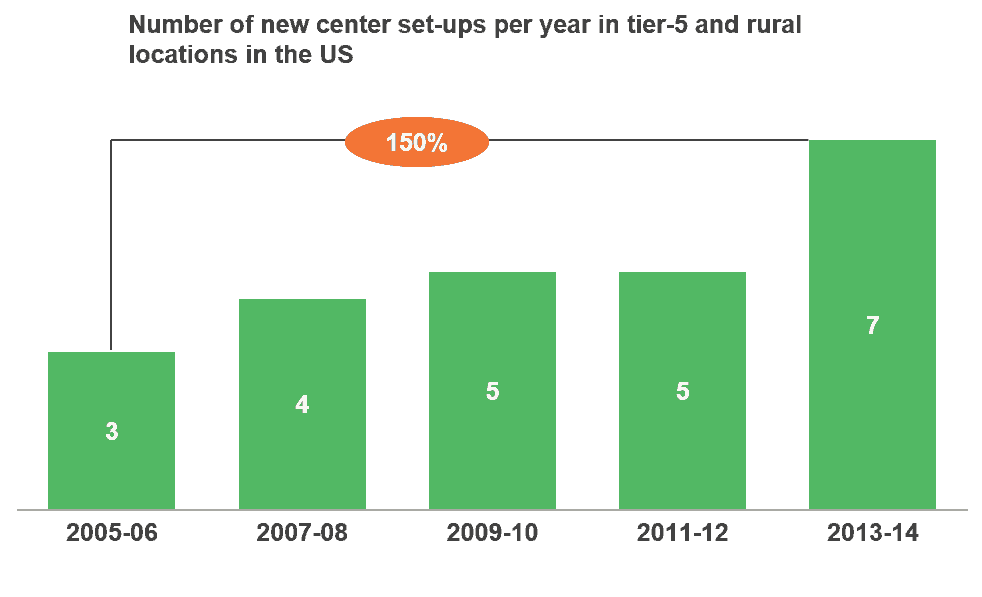 There are 100+ tier-5 and rural cities to choose from

More than a hundred tier-5 and rural locations are currently being leveraged by service providers for onshore service delivery. There are also a number of other potentially viable locales. Given the wide range of options these locations provide, they become an important consideration for players looking to establish a wider U.S. presence.

A large number of contact centers call these locations home 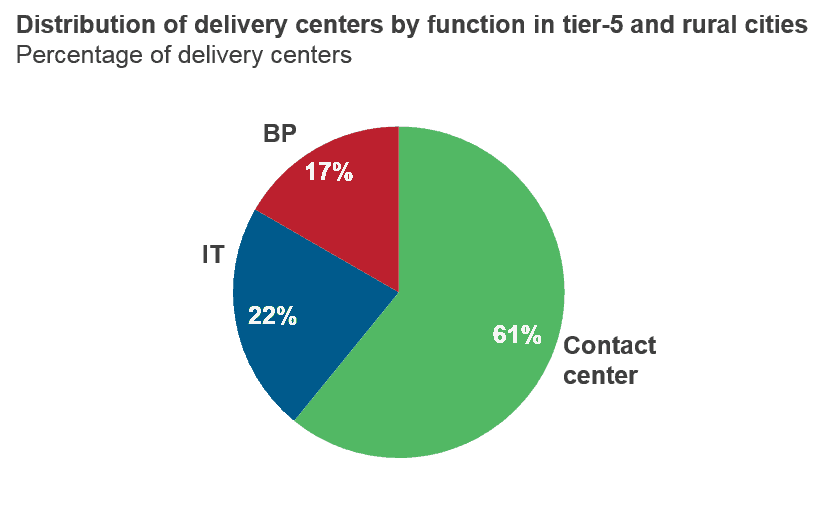 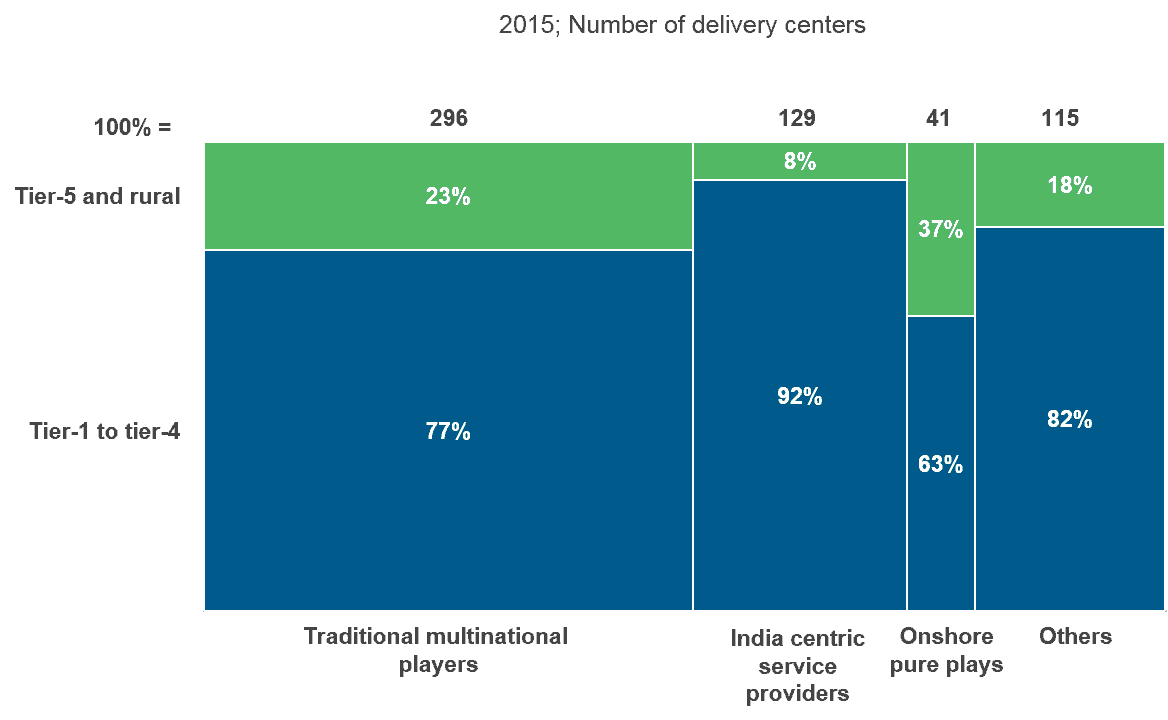 The leverage of tier-5 and rural locations is highest for domestic pure-plays – e.g., CrossUSA, Eagle Creek Software Services, Onshore Outsourcing, and Rural Sourcing Inc. – which have ~37 percent of their delivery centers in these locations. On an overall basis, traditional MNC’s still dominate the market landscape as they have significantly large number of delivery centers in the United States as compared to other players.

While talent availability in tier-5 and rural locations is generally lower than in tiers 1 to 4, they still offer a pool capable to support one or two moderate sized delivery centers. The typical delivery center size in these places is ~340 FTEs, as compared to a national average of ~445 FTEs.  However, there is evidence of players achieving a scale of above 500 FTEs, especially for contact center services, where high school graduates are utilized.

As onshoring grows in the United States, leverage of tier-5 and rural locations will also grow. Service providers are establishing their presence in these locales due to their lower costs and lesser competitive intensity. Hence, there is a significant opportunity for economic development agencies in these locations to attract potential investors and create employment opportunities.

To download a full copy of our research on domestic delivery, please visit: https://research.everestgrp.com/Product/EGR-2015-2-R-1455/North-America-Domestic-Outsourcing-Services-Providers-Embrace-

For more Market Insights™ on this topic, please visit:

To download our presentation from the RevAmerica event, please visit: http://www.revamerica.com/program/ 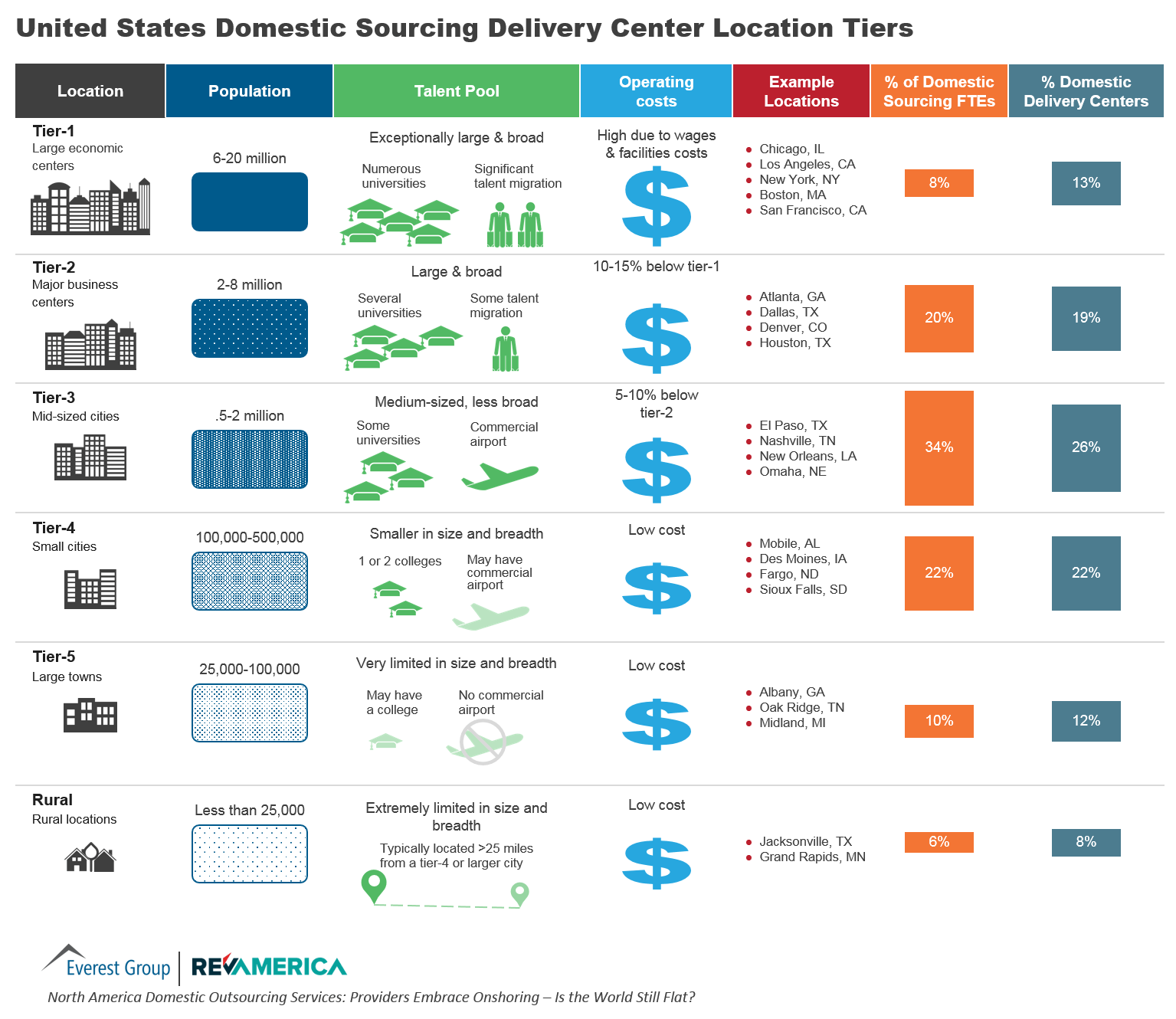 Last month I had the opportunity to attend and co-present with Eric Simonson at a special event in the outsourcing sector, RevAmerica 2015, held in New Orleans, LA. You can download our keynote presentation here. For those who might not know, RevAmerica is a domestic outsourcing event in its second year. The event focused on a multitude of topics and was attended by a strong community of service providers, buyers, economic development agencies, analysts/consulting firms, and academic institutions. Here are my top 10 takeaways from the event:

Overall the event touched upon some very relevant topics from the domestic outsourcing perspective and is paving the way for developing a stronger ecosystem to support this sector. Kudos to the Ahilia team for organizing a great event! Last but not the least, in case you are interested in learning more about the domestic outsourcing landscape, you can download Everest Group’s full report here. You may also want to read Eric’s blog on tier-3 cities: John Mellencamp Named Honorary Everest Group Analyst of the Month. 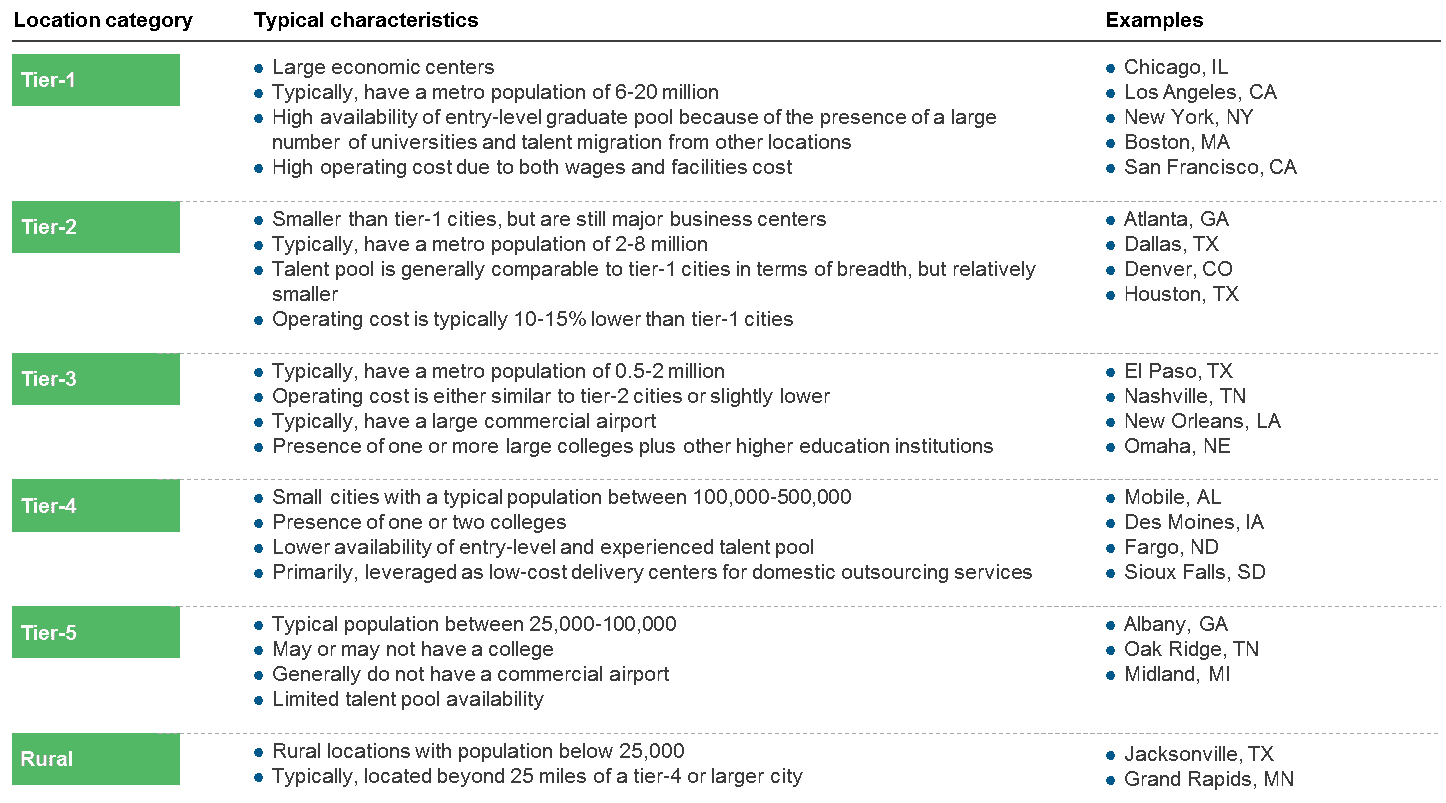 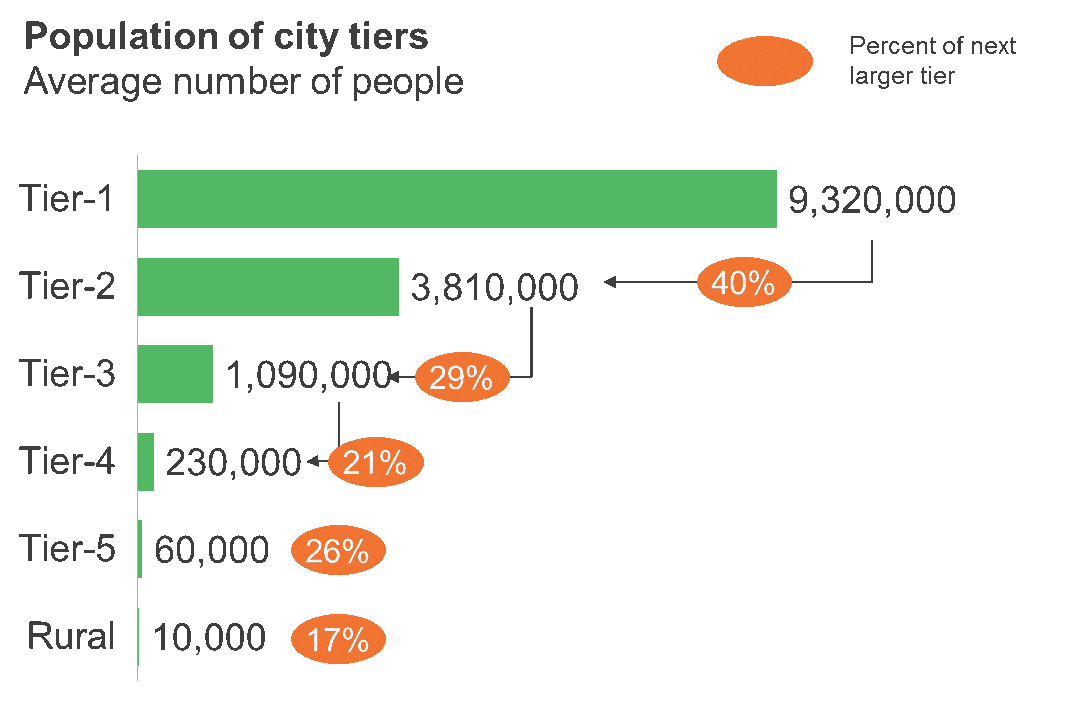 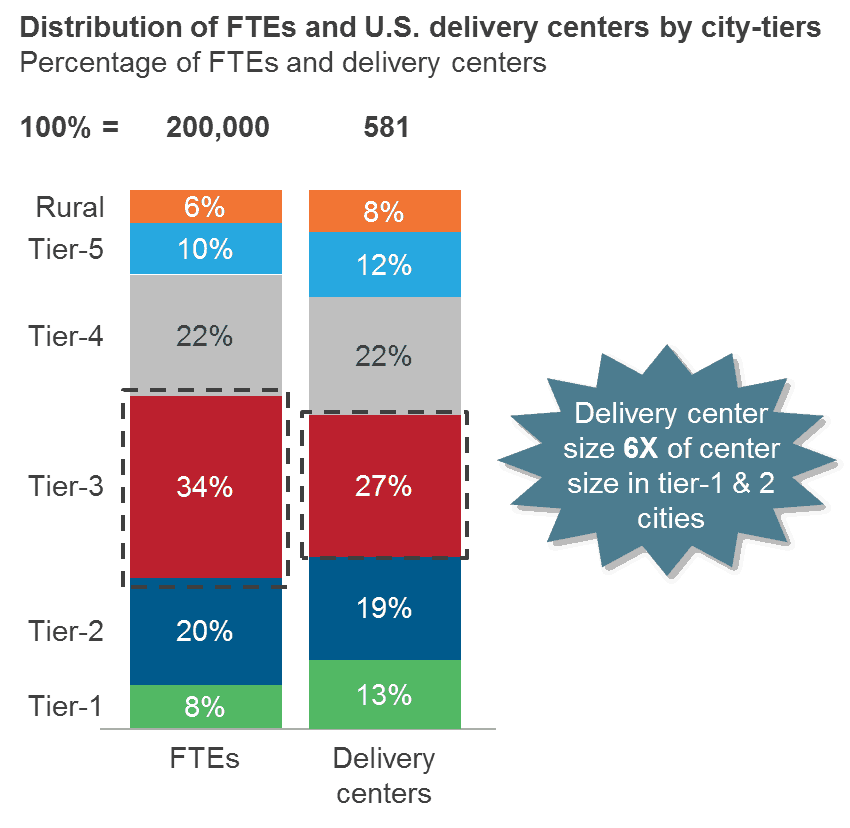 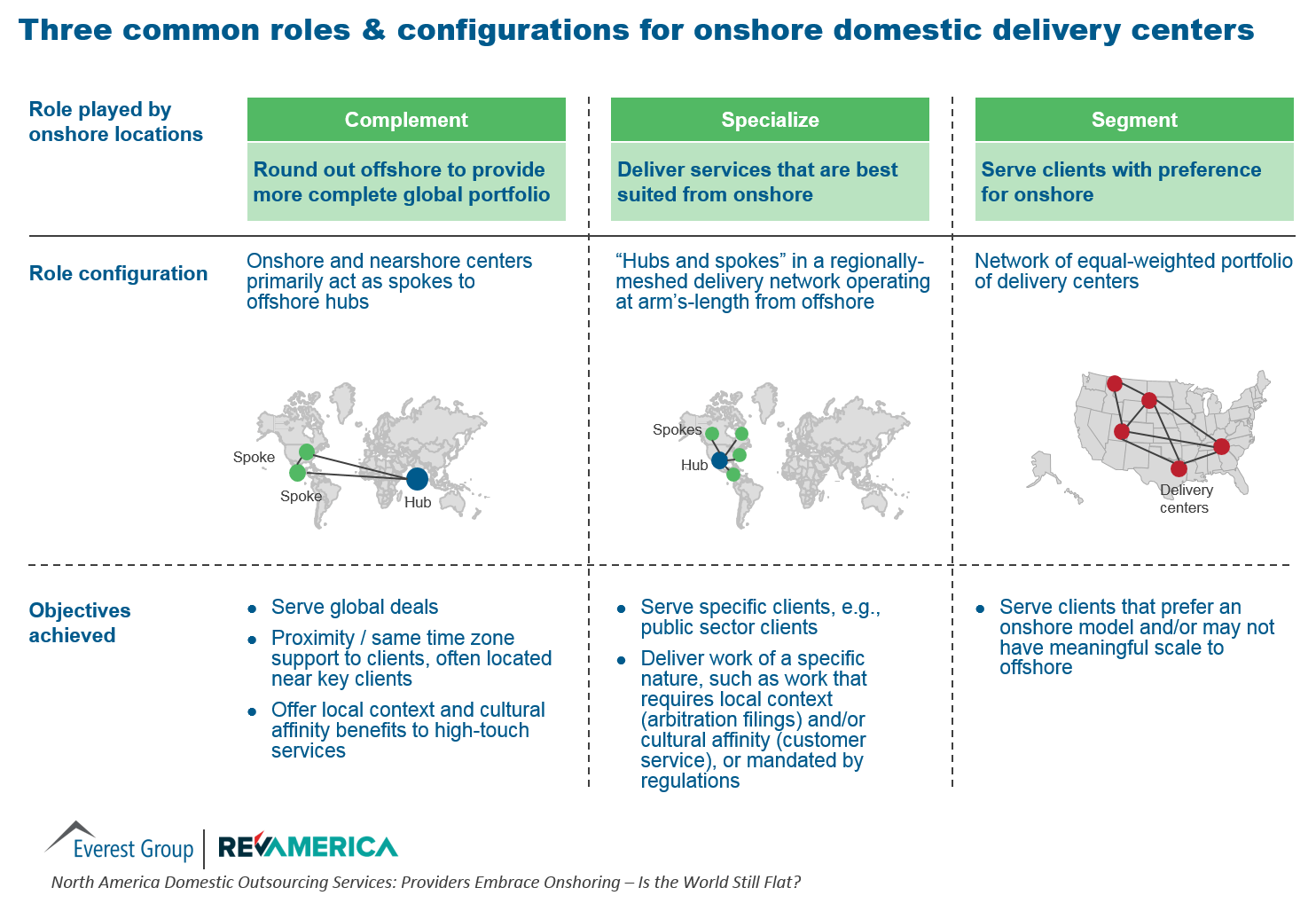 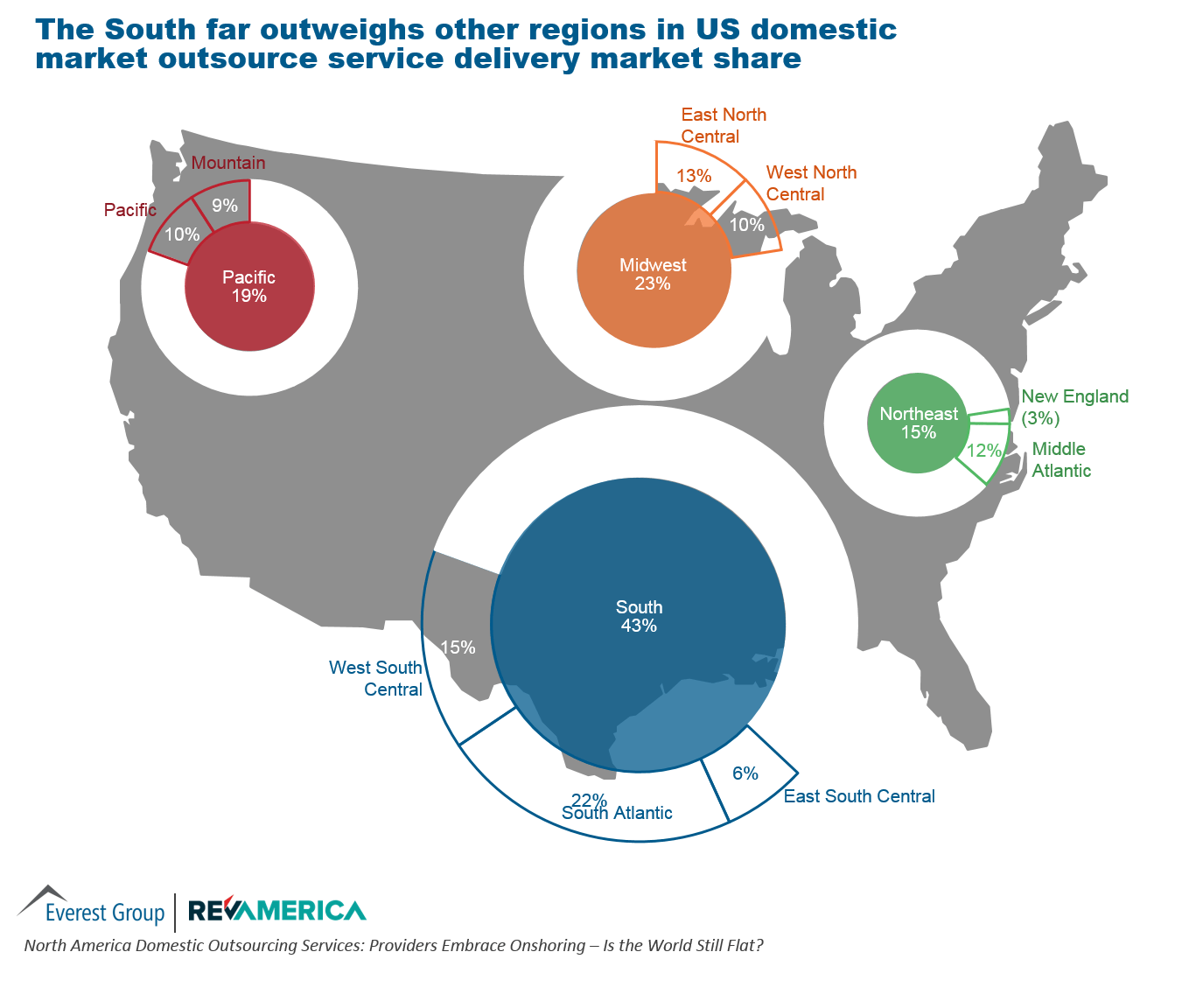 Contact Center, IT, and Judgment-Oriented Services Most Common Delivered from US Domestic Centers | Market Insights™ 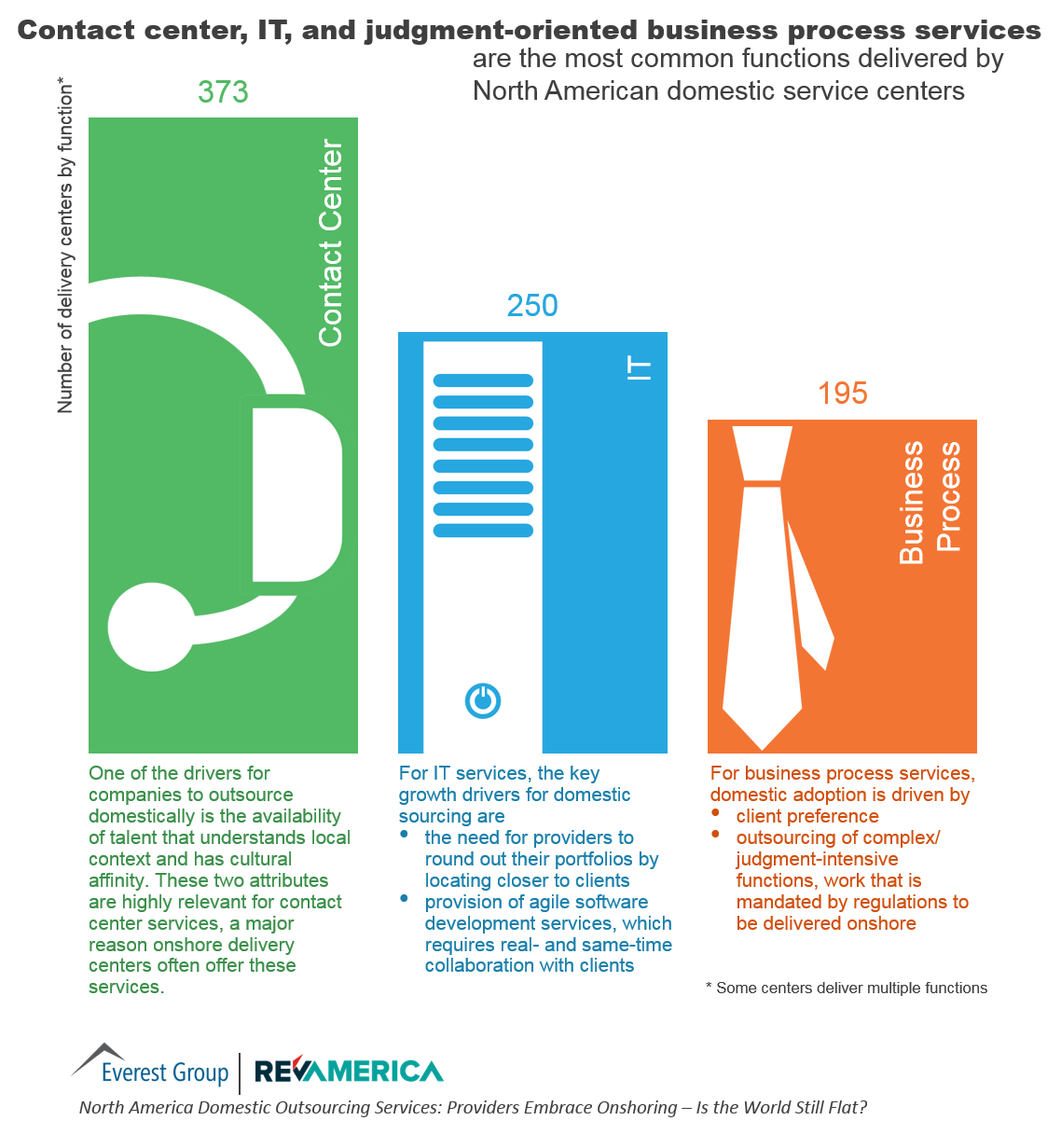 Contact center, IT, and judgment-oriented business process services are the most common functions delivered by North American domestic service centers 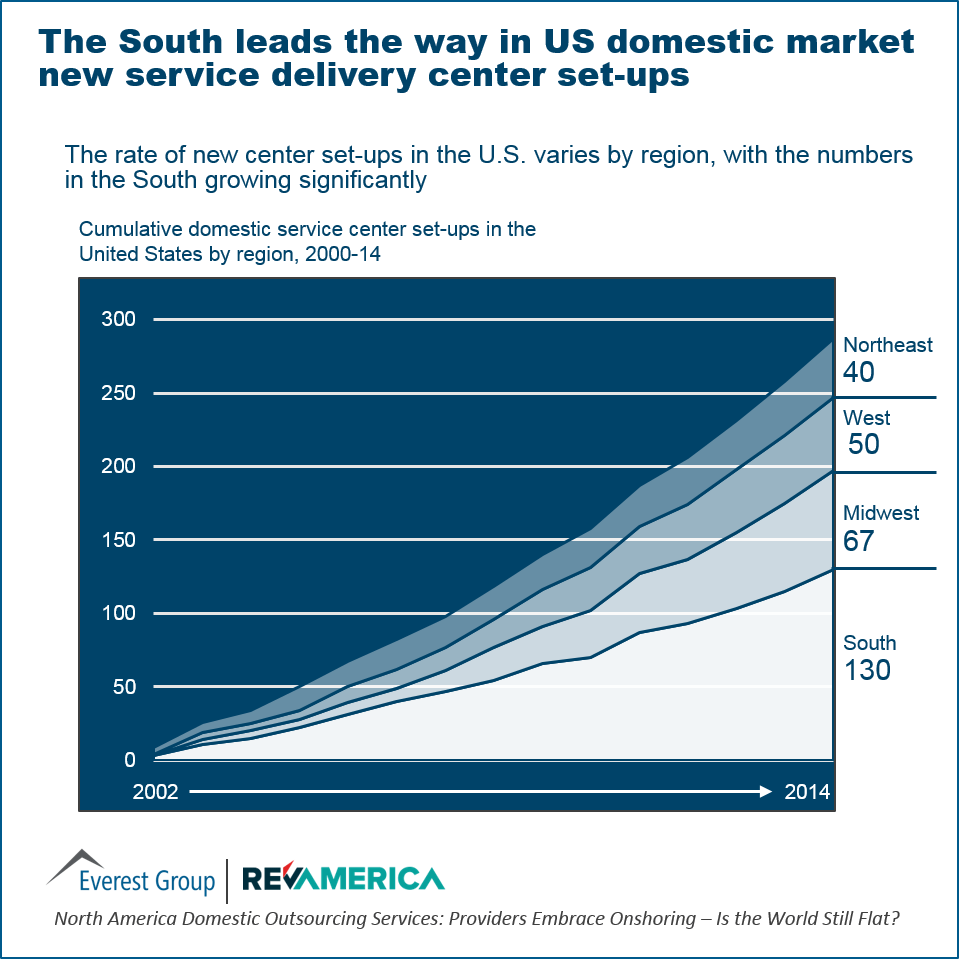 The South leads the way in US domestic market new service delivery center set-ups; the rate of new center set-ups in the U.S. varies by region, with the numbers in the South growing significantly