Register for our July 12 webinar, Services Costs are Rising: Learn 5 Strategies to Survive.

Insourcing is on the Rise in Larger Banks, with a Focus on Tech Innovation to Gain an Edge | Market Insights™ 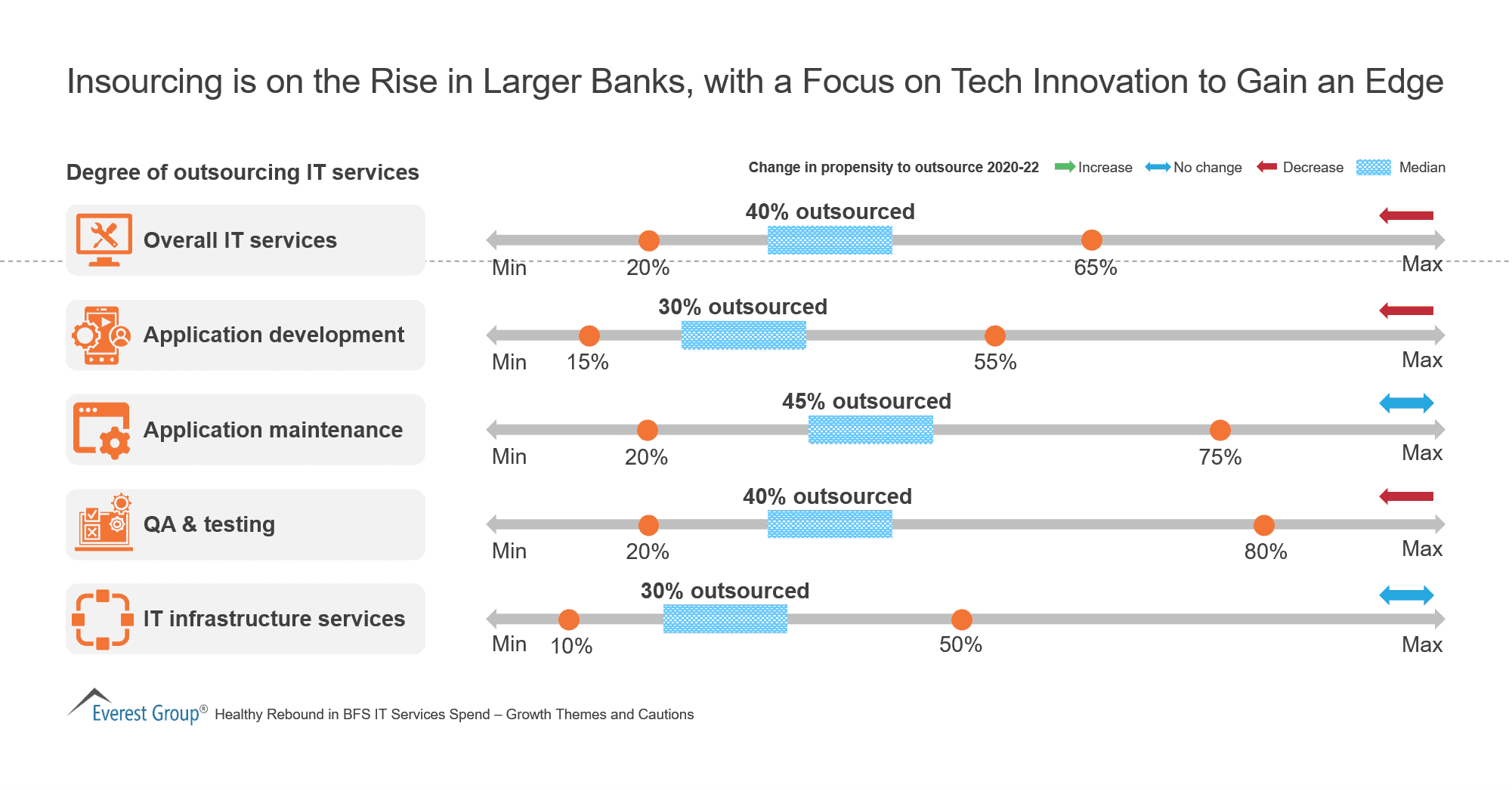 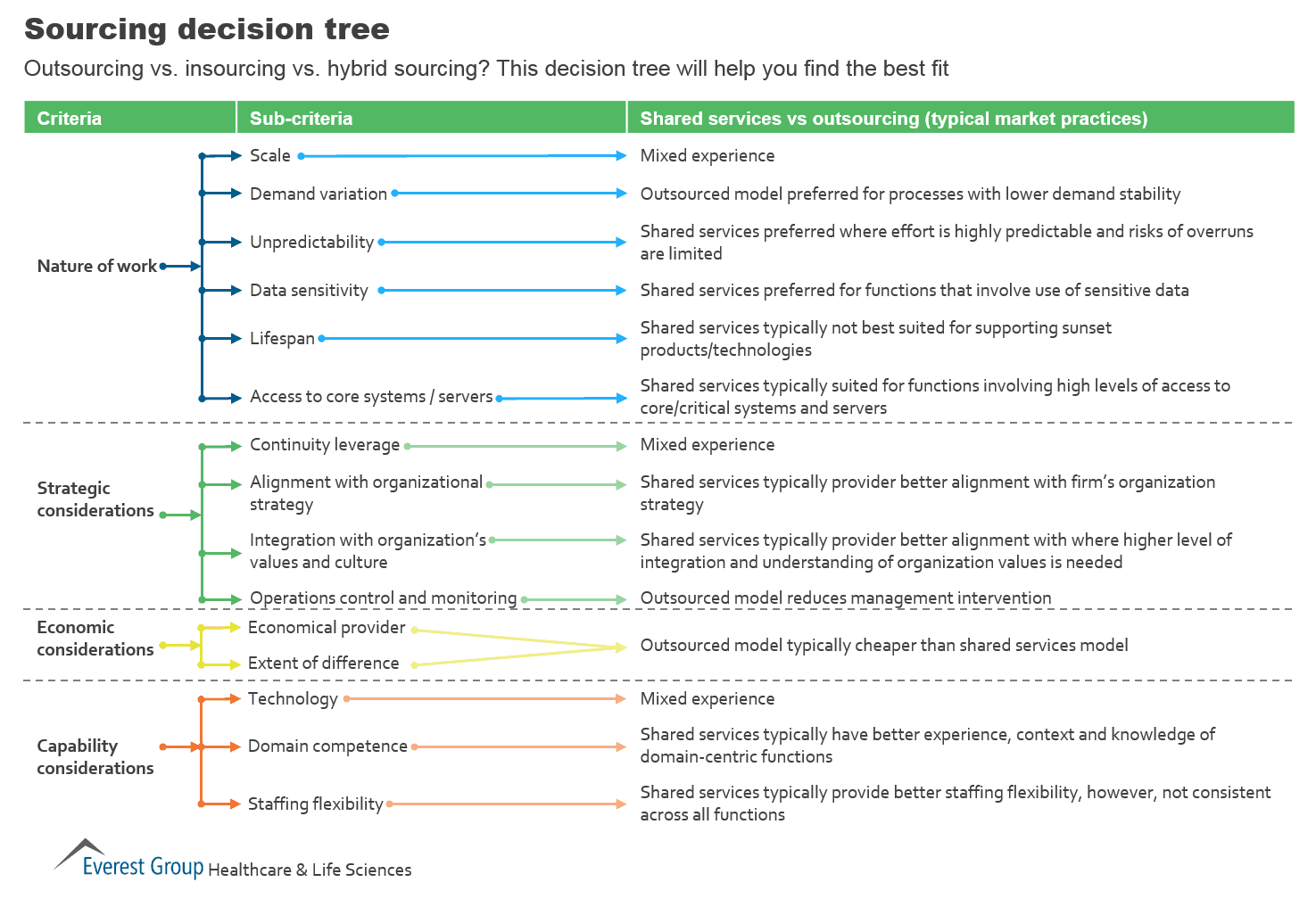 Outsourcing vs. insourcing vs. hybrid sourcing? This decision tree will help you find the best fit

Slow Growth of GICs… Is the Model Losing Its Sheen? | Sherpas in Blue Shirts

The Global In-house Center (GIC, formerly referred to as captives) market was once thriving with unprecedented statistics – 97 new GIC set-ups in 2009, 105 in 2010, and 103 in 2011. Then there was a dip, with only 75 new centers in 2012, and 69 in 2013. This, coupled with numerous acquisitions of GICs by service providers, (e.g., KBC Group’s financial arm by Cognizant, Bayer’s Indian IT operations by Capgemini, and Hutchison Whampoa’s India-based call center operations by Tech Mahindra), is likely to raise questions and concerns about the future of the in-house model.

Let us look at the ground realities of the GIC model’s growth and evolution: 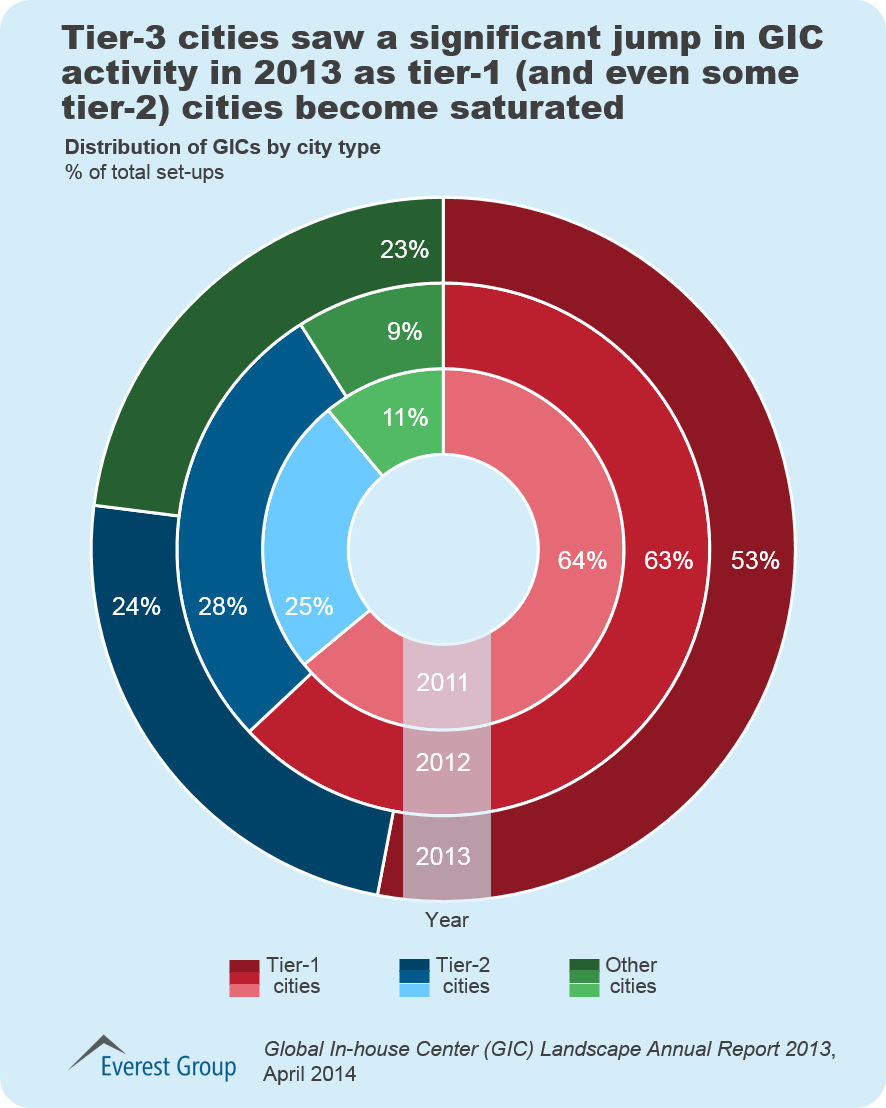 Further, while buyers’ moves from an outsourced to an in-house model rarely receive considerable fanfare, they do paint a picture of the health of the GIC model. For example, HP had been General Motor’s main IT vendor per a US$2 billion contract awarded in 2010, but in 2012 the automaker decided to insource a huge amount of its services as part of its new strategy, leaving HP with only a few. AstraZeneca plans to reduce its outsourcing work, which is currently spread across multiple Indian software service providers. BT plans to have more control of its processes by taking back its outsourcing contracts from service providers, and increasing its capacity in existing shared services centers in India and Malaysia.

The bottom line is that while GIC set-up growth may be slowing, the model continues to be an integral component of organizations’ sourcing strategy. Firms continue to leverage both sourcing models (service providers and GICs) based on best fit with their sourcing needs, cost and value objectives, and services demand profile.

For more insights on the GIC model landscape, please refer to our recently released report “Global In-house Center (GIC) Landscape Annual Report 2013.” The report provides a deep-dive into the GIC landscape and a year-on-year analysis of the GIC trends in 2013, comparing them with trends in the last two years. The research also delivers key insights into the GIC market across locations, verticals, and functions, and concludes with an assessment of strategic priorities for GICs.

Full of Sound and Fury: The Irrelevance of the U.S. Election Offshore Rhetoric | Sherpas in Blue Shirts

In our last Market Vista webinar, we asked the audience to share its perspective on what is likely to happen with offshore demand as the election season in the United States concludes. As shown in the poll results below, few expect much to change after the election season – the votes are tightly clustered around slight change or no change.

Although the results are consistent with my own personal view, it is certainly in contrast to the number of times I am asked about this topic by the media and other industry observers.

So why is there more noise than substance? Why does the global services market see the political rhetoric as largely irrelevant?

Stepping back, we must bear in mind that politicians are typically speaking to their audience through mass media and messaging accordingly. In other words, what we hear is dumbed down and intended to grab emotions and headlines. However, outside of the noisy rhetoric, top politicians and policy makers do understand the fundamental forces shaping the U.S. and global economies and are unlikely to meaningfully influence the evolution of global services and associated offshoring – regardless of whether Obama or Romney wins the U.S. presidential election.

General Motors’ Drive to Insource most of its Outsourced IT Scope by 2015: Prospects of an “against the tide” success story? A recipe for disaster? A populist political play? | Sherpas in Blue Shirts

Ever since GM acquired EDS in 1984, the company has been on a roller-coaster ride with its global sourcing strategy. As a part of GM, EDS did progress and had many government bodies and enterprises in more than 20 countries as clients. However, GM decided to spin off EDS as an independent company in 1996, ending their 12-year association. Part of the divorce terms included a 10-year relationship with business guarantee from GM.

Meanwhile, the United States auto sector was experiencing a major downturn in fortunes all the way into the new millennium. GM suffered significantly at the hands of dwindling consumer confidence, resulting in more than US$8 billion in losses during 2005. At that time, Ralph Szygenda was leading GM’s IT. When the 10-year period for GM’s promised sourcing relationship with EDS ended in 2006, Szygenda put together a massive transformation blueprint with a $15 billion ticket value. Multiple outsourcing providers, including IBM, HP, EDS, Capgemini, and Wipro, were beneficiaries of the initial solution framework. HP and GM renewed a US $2 billion contract in 2010; Capgemini and GM also renewed. All this led to the reasonable assumption that GM was very serious about its sourcing strategy and confident of the advantages of the solution.

Fast forward to mid-July 2012, when current CIO Randall (Randy) D. Mott announced that GM will bring down the outsourced IT scope from 90 percent of total IT scope, with a goal to reduce the number to 10 percent by 2015. So what can we make of this announcement?

On one hand, Mott argued this will lead to better productivity and increased agility of IT in responding to business changes, given that new initiatives will be channeled into action instead of disappearing into procurement due diligence and contract negotiations. Another implication is around GM being able to extract scale advantages (a typical outsourcing value lever), given its large size of operation across multiple geographies. Also, keeping IT largely in-house will allow GM to adopt solutions tailored specifically for the manufacturing, supply chain, and sales channel challenges inherent in the auto industry.

On another hand, this change in sourcing strategy sounds like a great local employment opportunity for engineering graduates, especially in GM’s operation centers… potentially tens of thousands in “created” jobs.

Nevertheless, speculation is rife that this move is proving beneficial for the prospects of President Barack Obama’s campaign this election year, given the overall developing negative sentiment against offshoring. Not very long ago, in 2009, GM received a fat financial bailout package from the U.S. government; is this perhaps a showing of GM’s return of favors?

The outsourcing model has been around for multiple decades, and has matured over time. Outsourcing buyers around the globe have had problems similar to GM, and have historically adopted other measures such as vendor consolidation, scope rationalization, and standardization. With that, it sure does feel like GM is throwing out the baby with the bath water. And if its insourcing move doesn’t go well, that may be the only way to sum up its decision.

The jury is still out on whether this was a populist move by a recipient of political benevolence, and the world will watch closely the results of this massive, ambitious project. Even a minor deviation from stated goals will be scrutinized, considering that most major service providers are landing on the losing side of this deal. Net-net, Randy Mott will need all the help and luck he can get to pull this one off. Should he succeed, murmurs of blueprint replication in other corporations are bound to reach fever pitch.

What are your thoughts on GM’s insourcing strategy? Please post them in the comments section. I look forward to hearing from you!