Earlier today, Cognizant reported its financial results for the first quarter of 2011, bringing to an end the earnings season for the Big-5 Indian IT providers – affectionately referred to as WITCH (Wipro, Infosys, TCS, Cognizant, and HCL). Cognizant’s results were yet again distinctive: US$1.37 billion in revenues in 1Q11, which represents QoQ growth of 4.6 percent and YoY growth of 42.9 percent. The latest financial results reaffirmed – yet again – Cognizant’s growth leadership compared to its peers and are a testament to Cognizant’s superb client engagement model.

In a recent blog post, my colleague Vikash Jain commented on the changes in the IT services leaderboard, and especially the questions and speculation on the relative positions of Wipro and Cognizant in the Indian IT services landscape. Cognizant’s 1Q11 revenues are now just US$29 million below Wipro’s IT services revenues, and based on current momentum, Cognizant could overtake Wipro as early as 2Q11, making it the third largest Indian IT major in quarterly revenue terms. The guidance provided by the two companies for the next quarter – Cognizant (US$1.45 billion) and Wipro (US$1.39-1.42 billion) – provides further credence to the projected timelines.

How important is this upcoming change in the relatively static rank order of the Indian IT industry (the last change happened in January 2009 post the Satyam scandal)? Not very, in our opinion. As and when this happens, the event will indeed create news headlines and the occasional blog entry, but the change in rankings does not imply a meaningful change to the overall IT landscape. Further, other than providing Wipro with even more conviction to make the changes required to recapture a faster growth trajectory, the new rank order does not suggest any changes in the delivery capabilities of either of these organizations.

As we advise our clients on selecting service providers, we believe that it is more important to understand the service provider’s depth of capability and experiences in the buyer organization’s specific vertical industry. While total revenues and financial stability are important enterprise-level criteria, performance in the vertical industry bears greater relevance and significance as buyers evaluate service providers. In our 1Q11 Market Vista report, we examine the CY 2010 revenues of the WITCH group to determine the pecking order in three of the largest verticals from a global sourcing adoption perspective – banking, financial services and insurance (BFSI); healthcare and life sciences; and energy and utilities (E&U).

As we recognize there are differences in the way these providers segment results, for simplicity we are relying on reported segmentation (which we believe does not meaningfully alter the results). The exhibit below summarizes the results of our assessment: 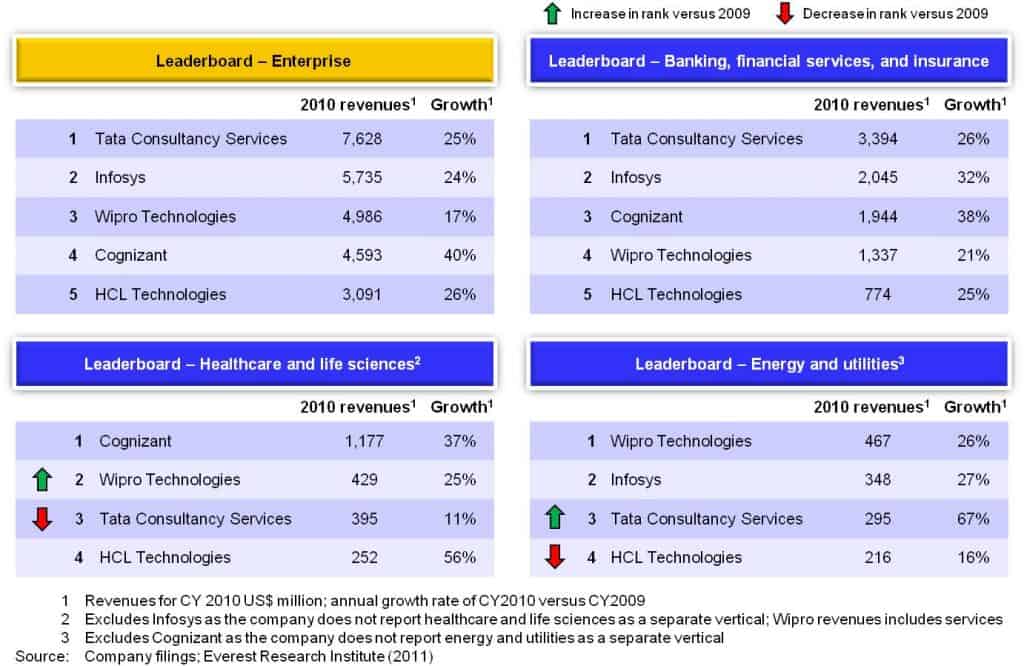 While it will be interesting to see the impact on a full year basis, the above changes in momentum already indicate further changes in the industry leaderboard before the end of the year.

On an unrelated note, by the time we revisit the Wipro versus Cognizant debate when the Indian majors announce their Q2 results starting mid-July, WITCH will assume an additional meaning – the last installment of the Harry Potter movies is due for release on July 15, 2011!

The Brand Angle in Technology Services | Sherpas in Blue Shirts

There has been a lot of recent talk about growing commoditization in the technology services industry, and understandably so. In an industry significantly fragmented (nearly 100 global firms with more than US$1 billion+ in revenue), there is a growing sense of firms turning into mirror images of each other. For example, large Indian IT firms are today so perceptively indistinguishable that they are more identified by their category presence (e.g. Tier 1, TWITCH) than by unique company branding.

To be fair, quite a few industry firms have attempted to build brand awareness through creative advertising. Accenture’s “High performance. Delivered.” and HCL’s “Mr. HCL” campaigns are cases in point. Yet, these tend to focus on building awareness on capabilities and credentials, and rarely, if ever, communicate differentiation. Every equivalent player in the marketplace has its own version of the “delivering high performance” or “we run everything that has technology in it” theme to deliver to clients when needed.

While a few firms could be starting to differentiate on their strategic intent, and the commodity characterization of some could be debunked with diligence, distinctive brand communications are needed if market perceptions are to be molded. With similar sales and delivery capabilities, similar talent pools, similar hiring and training structures, similar methodologies and tools, and management with similar backgrounds, it is easy for the market to continue viewing all firms in a category as clones.

In addition, the technology services industry is quite unique in the long-term nature of client-provider interactions. Because these interactions happen continuously throughout sizable deal tenures, these experiences influence client perceptions more than all advertising and sales communications.

Therefore, a key to communicating differentiation lies in branding delivery. While obviously easier said than done, two well worn-out strategies from other service industries could help:

Today, only two of the top 50 global brands (per the Interbrand 2010 rankings) have a technology/business services focus (IBM at #2 and Accenture at #47). And not one among the Indians features in the top 100.

It would be great to see this change.