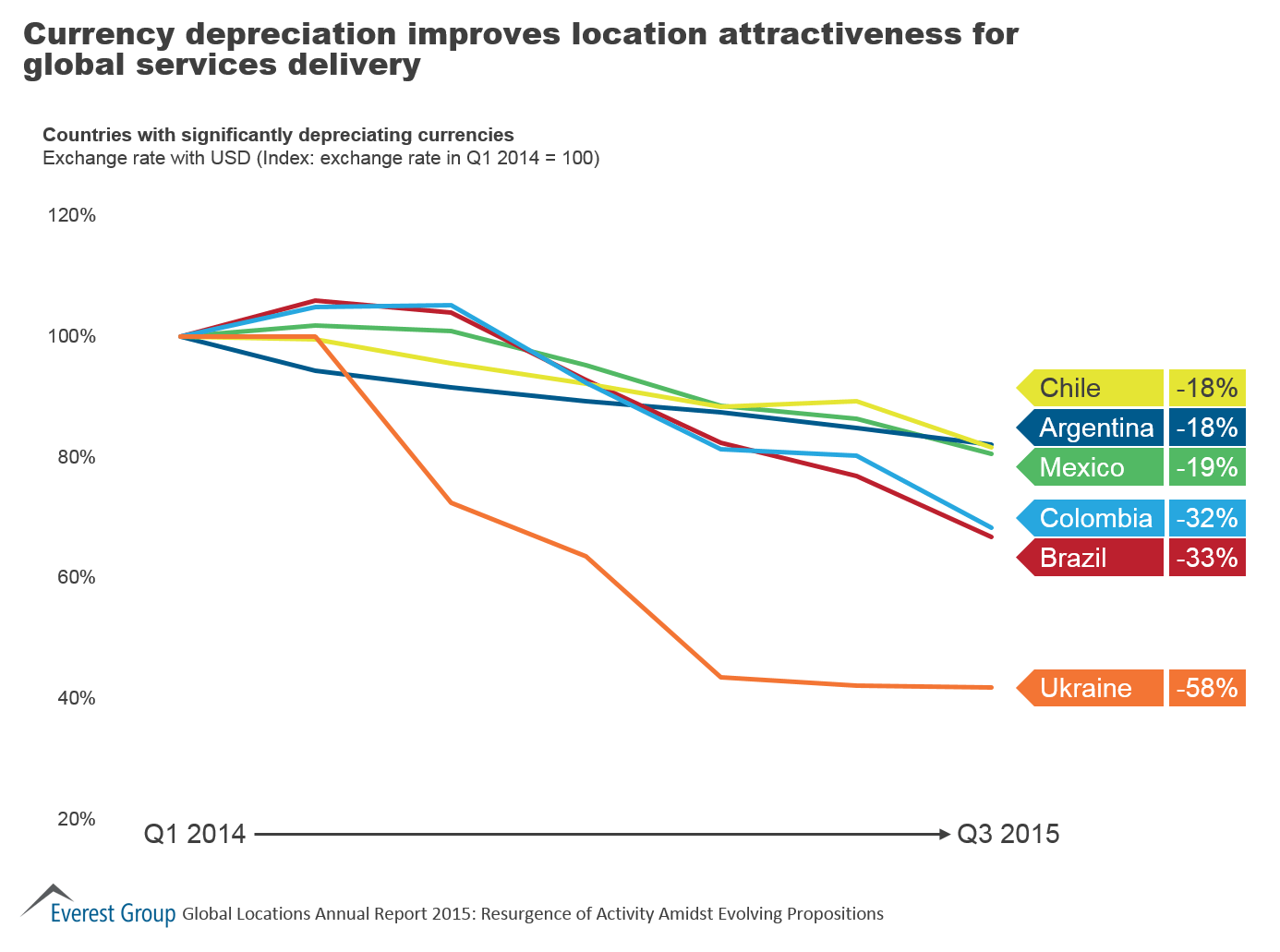 Both buyers and providers in the global services industry are scrutinizing how to react to the dramatic depreciation of the Indian currency. Since 2000, the rupee has traded in the range of 40-50 rupees to the U.S. dollar and in recent years was stable at 45. But it depreciated during the last two years and now hovers at 64.26 per dollar — a 23 percent drop against the dollar. Unfortunately, many existing services contracts were signed with pricing based on an expectation of 45 rupees to the dollar.

Never mind that the Indian providers have been able to use the depreciation to offset wage inflation and competitive tensions — customers only envision the ka-ching sound of a cash register when they look at this windfall to providers’ profits. They feel entitled to share in the value created by rupee depreciation. In fact, some buyers have asked their providers for a corresponding reduction in price; and in some instances, particularly where contracts terms have completed, they are succeeding.

But there are unintended consequences for those who ask for the price reduction.

We have observed several providers responding to this challenge by shortening contract lengths. In some instances we’ve seen them unwilling to extend new pricing beyond one or two years.

This is understandable — after all, what goes up must come down. If providers give pricing concessions that are commensurate with the fall in the rupee, they also want to be protected on the upside. The value of the dollar could depreciate, for instance, and the providers would then be in a very difficult situation.

With contract durations of one or two years, buyers need to recognize that their interaction costs will rise and they will spend a lot of time and money negotiating contracts.

None of us is smart enough to know what will happen with currencies; thus, determining contract pricing is complicated. Including specific hedges around currency is painful on both sides because of the uncertainties in the work allocation between offshore and onshore. The current situation with rupee depreciation underlines the absurdity of long-term pricing commitments.

Historically, currency volatility has played to the providers’ benefit because they were able to adjust their scope and pricing through change control. But the current depreciation of 23 percent plays against the providers; such a large shift in FOREX significantly affects their profitability. Given how much FOREX has shifted in their favor, they feel they need to protect themselves if they give up some of that gain. Certainly one means of protection is shorter contracts, and we’re starting to see that trend emerge.

Most currencies have varied significantly in the past few years (see the graphic below). For example, in Asia-Pacific, the Indian rupee has depreciated considerably compared to the U.S. dollar, with an average yearly decline of 5.4 percent in the last three years. On the other hand, the Philippine peso has appreciated substantially against the dollar, recently reaching a four-year high. The currencies from major outsourcing locations in Latin America and Europe have also been volatile in recent months. 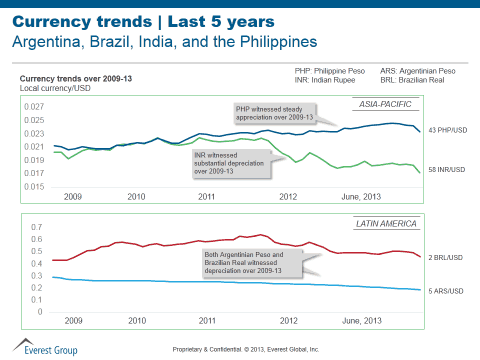 While one would have expected the large currency variations to have a big impact on delivery costs, a closer analysis reveals that the relative cost rankings of locations in 2013 have remained nearly the same as in 2010 (see the graphic below). This counter-intuitive result is because the currencies in most global services delivery destinations have depreciated over the last few years. In addition, all these locations have experienced moderate-to-high wage inflation, thus having a similar net impact on cost across locations. 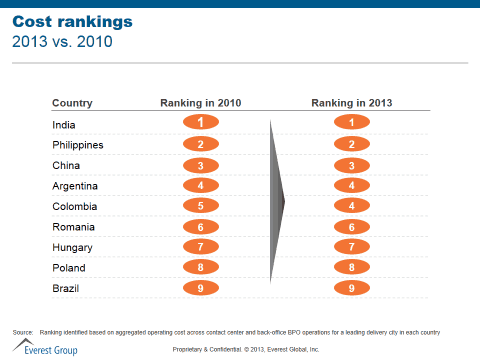 Further, the interplay of wage inflation and exchange rates is leading to interesting trends in absolute value of operating costs among locations. Let’s look at two extreme examples to understand this phenomenon: 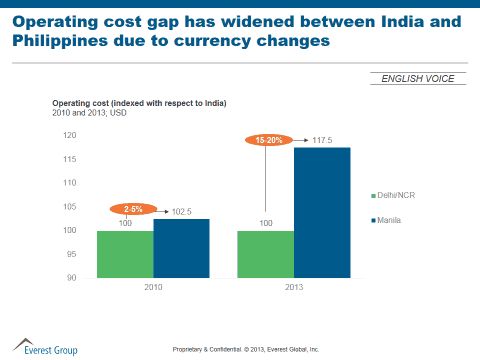 It is important to note that these cost changes among competing locations for similar type of work has not resulted in changes in work distribution. For example, India has not gained greater share of contact center voice work relative to the Philippines. This is because while cost is an important factor, location selection and work placement decisions are dependent on several other factors, e.g., talent availability and scalability, niche skills, risk considerations, and the organization’s existing footprint. Short-term currency changes may result in companies optimizing some work among locations in their portfolio, but this alone is not likely to significantly change the role and standing of locations in their portfolio.