The amount and timing of impact of next-generation technology levers on service providers varies by BPM segment; while some will be immediate and net negative, others can provide new growth opportunities 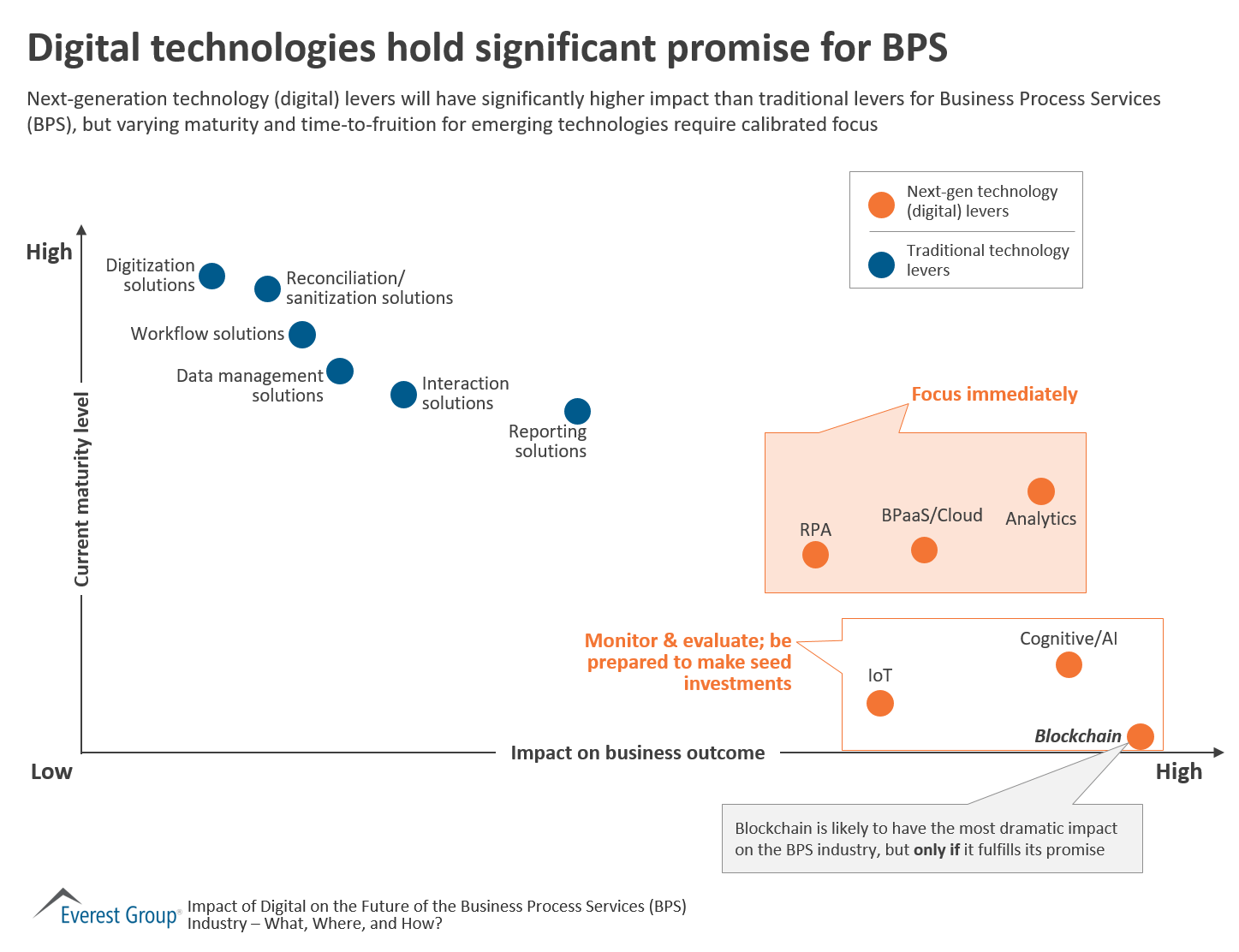 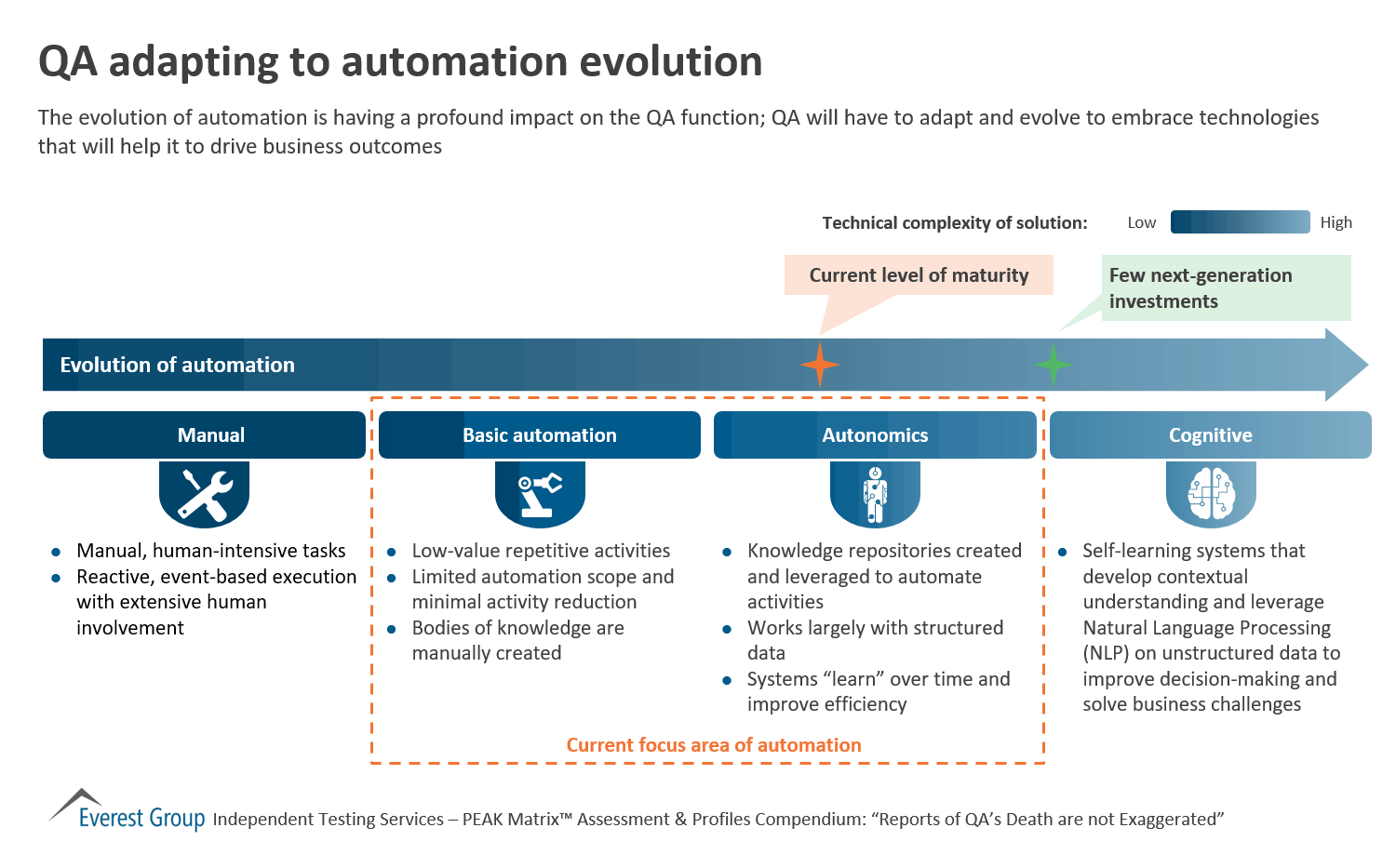 The evolution of automation is having a profound impact on the QA function; QA will have to adapt and evolve to embrace technologies that will help it to drive business outcomes

In his 1970 book “Future Shock,” author and futurist Alvin Toffler made the argument that the modern world disorients people as it creates so many overwhelming changes that we are unable to handle them. Almost 50 years after the book was published, I was struck by Toffler’s argument during a recent client engagement in which we were helping an enterprise identify virtual agents/chatbots for its customer-facing processes. All of the bots contained a healthy dose of artificial intelligence (AI), and each one was trying to push the envelope.

Is AI starting to overwhelm people to the point that they may get frustrated with developments they cannot fathom or use?

Every day we see and read about new use cases that “wow” us. We are amazed and bedazzled by advances in AI. And some are becoming increasingly commonplace in the consumer arena…just think smart homes.

On the flip side, there have been instances in which consumers have found dealing with these omnipresent home devices scary and frustrating. Humans have already strongly voiced that they don’t need bots to shop. And, feeling the need for peace in their home, they have switched off many of their home assistance devices.

Some may argue that the technology industry, driven by the high intoxication from the ivory towers of Silicon Valley, is getting way ahead of the people who are expected to be the eventual consumers of these technologies. The amount of new AI research and products coming every day out of these factories is mind numbing. A significant number of such products may not have any immediate utility, but they do indeed demonstrate the far-reaching power of such advanced systems.

There is an unending scare around AI, cognitive, and other advanced systems taking away jobs from human beings. In the case of virtual reality, people are entranced by engaging with virtual objects as if they are real. It’s fun, until they realize the negative impacts it can have on their day-to-day lives. And, instead of assuaging such fears, the technology industry continues to create use cases to replace human tasks with robots.

From an enterprise perspective, organizations need to proactively create an AI adoption strategy for their business. Though most now have some vision around using AI technologies, frighteningly few are preparing for the massive change management aspect. Their employees must be comforted around the impact AI can and will have on their lives. Indeed, the significant disruption AI technologies can create within a business context may require a very different approach than other technology adoption we have ever witnessed. Technology vendors need to focus on how AI-enabled systems are assisting or helping human beings. The use cases need to be very precise, clear, and friendly, not overwhelming and complex, which they currently are.

The problem is not AI technology. The problem is the way it is being introduced, and the hyperbole around it that may end up overwhelming a significant portion of the human race, leading to eventual burnout. We are humans, and should create technology for humans. If the very technology we create results in alienating a large percentage of us, we will have failed as a human race. AI systems need to be leveraged for enhancing human lives, not for creating technology marvels that overwhelm people and create the future shock.

Stepping Back from Globalization and Offshoring | Sherpas in Blue Shirts

A sea change is starting because of digital technologies. The impact as companies apply these technologies to their business will be massive – much bigger than the Industrial Revolution with the invention of the loom for manufacturing clothing and Ford inventing the production for manufacturing automobiles. Everyone has been talking for some time about how big an impact these technologies will have on the services industry. But there is a new factor now that makes the potential impact even more significant: the protectionist activities driving companies to step back or pause in globalization and offshoring. I think the services industry would be foolish to ignore the potential of this greater impact. Let’s look at where businesses are headed.

There can be no denying that the stakes have been raised and barriers are being put in place to make globalization and offshoring less acceptable and expensive. In Europe, it is evident with the Brexit bill and the UK opting to leave the EU. In the US, protectionist barriers are starting to be executed through proposed changes to immigration law and H-1B visas, tax reform and potential border tax implications, and reputational risks arising to companies from government entities or disgruntled employees and vocal press entities. The result: companies are paying more attention to how to do work onshore without suffering negative cost impacts.

By investing in digital technologies such as Robotic Process Automation (RPA), cognitive computing, automation and cloud, companies can drive cost improvement by dramatically improving the productivity of their workforce. In many cases, they can achieve cost improvement even greater through improved productivity than through labor arbitrage and thus offset impact of not sending their work offshore.

Of course, service providers also can use these technologies to improve their own workforce productivity to offset the potential of rising costs from immigration and H-1B visa reform in the US.

Our market data shows leading providers in the services industry have been looking at digital technologies and associated digital models well before this step back in globalization. Our tracking of service providers clearly shows the traditional services (labor arbitrage, offshore factory model, remote infrastructure management and asset-intensive infrastructure) grew by only .1 percent last year. Almost all the growth in the IT and business process services market came from new digital offerings – which are currently growing at over 18 percent a year.

Although the trend in digital services has already been growing, we believe the current climate discouraging globalization and offshoring will further accelerate the adoption of digital models. This will force the current shared-services structure. It also will force the provider community to fundamentally change their business models and the way they currently structure their business to deliver services.

Experts see a 3% contraction in revenue this year due to cloud, automation and cognitive and expect more clients to want to do things themselves rather than outsource.

“If 2016 was difficult I expect 2017 to be harder. We also see a trend of revenue compression driven by automation, cognitive and cloud and we expect that this alone will reduce revenues from the existing book of business by 3% in 2017,” Peter Bendor-Samuel, CEO of analyst firm Everest Group, told ET.