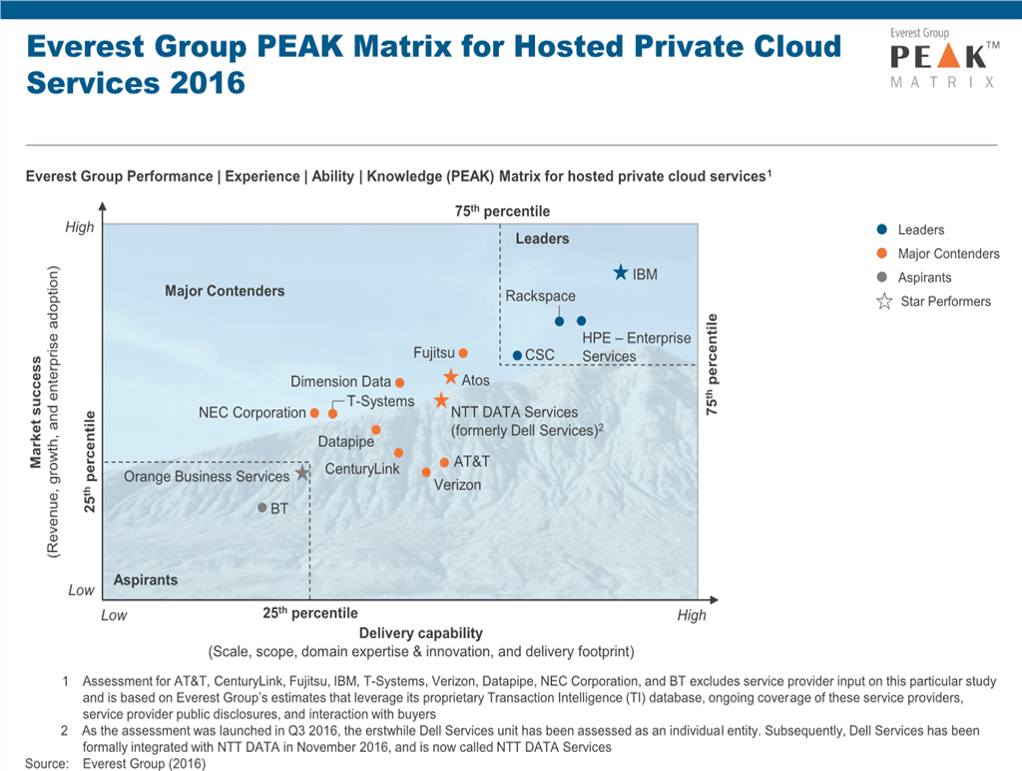 Larry Ellison Bets on Oracle’s Organic Route to the Cloud, But How Are Buyers Evaluating the Cloud Capabilities of Their Service Providers? | Gaining Altitude in the Cloud

Last year when I wrote a blog on how AT&T was betting on its network legacy to win in the cloud, I dropped a hint as to how cloud was turning out to be a melting pot for service providers with disparate legacies.

In fact, all broad categories of service providers approached cloud in their own unique way. On one end of the spectrum were new-age service providers like Amazon Web Services, (AWS), which pushed ahead with its public cloud concept. On the other end, some traditional service providers simply brushed aside the hysteria associated with cloud. In that vein, quotes such as the following ensured that cloud got media coverage even outside technology space, inciting (ironically) even wider interest on this topic.

On Wednesday, when Larry Ellison explained that Oracle’s cloud strategy is focused internally on developing cloud solutions (and deviating from its usual acquisition strategy), the debate came full circle, demonstrating that service providers have indeed moved beyond rhetoric on cloud.

As a result, the time is now ripe to shift the discussion from cloud providers to cloud services buyers. As enterprises contemplate moving a larger share of their IT spend to the cloud, their efforts invariably focus on the following two considerations:

While TCO evaluation models are still maturing and are currently situation dependent, provider capabilities and standards have matured enough for buyers to benefit from research data.

Going back to my earlier comment on service providers with disparate legacies…following is how Everest Group’s IT outsourcing team depicts a sampling of the melting pot of cloud service providers: 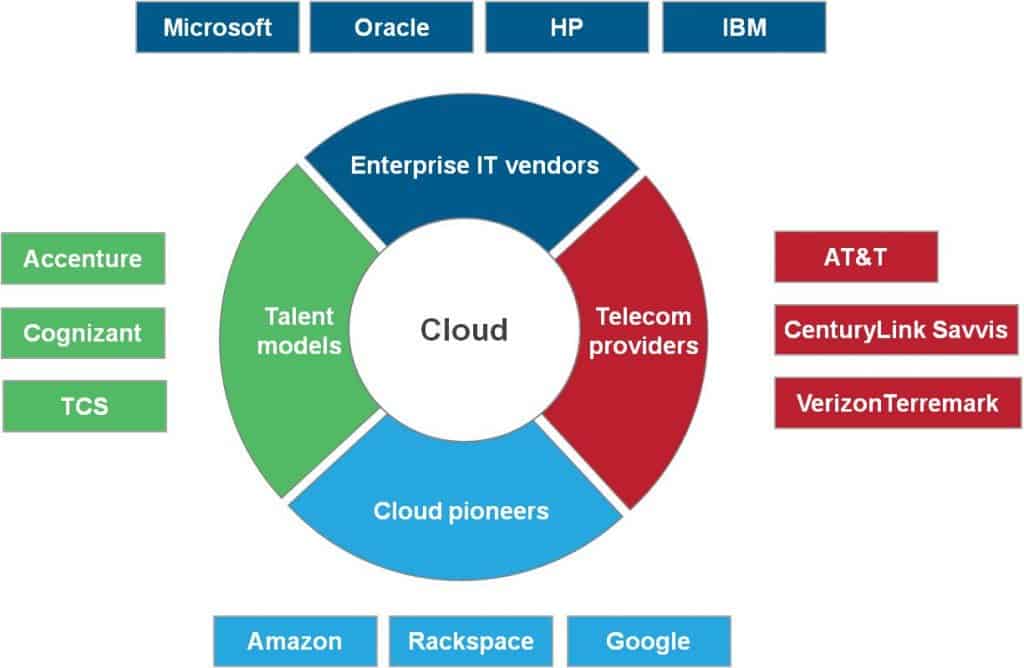 IT buyers’ incremental approach to cloud adoption has led service providers to reinforce their legacies, and develop and/or acquire cloud solutions around them. Most of the cloud deals we have analyzed were existing service agreements wherein a cloud service component was introduced either as a value-add from the service provider or per a specific request from the buyer. Hence, as the above picture illustrates, all service providers are now in earnest trying to carve out their own niches in the cloud services market – through solutions, partnerships, technology, or asset ownership.

Based on our interactions with a wide range of buyers, it is clear that cloud will increasingly constitute up a major portion of large enterprise deals in the next five years. The following illustration summarizes those discussions: 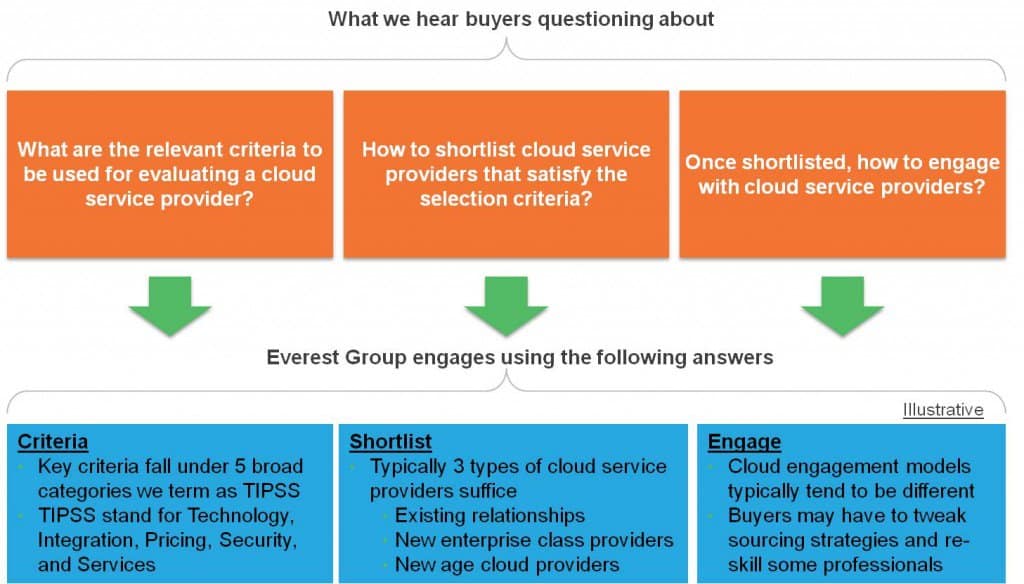 Everest Group has embarked on an initiative to help buyers answer the above questions in order to assist them in achieving their overall sourcing goals.

Watch this space for more details on this new area of research.

Cloud Wars: the Demise of Simplicity and Standardization | Gaining Altitude in the Cloud

In its comparatively short yet highly significant lifetime, the cloud industry has quickly devolved into a confusing morass of technology jingoism, marketing hype, aggression, and even negative allegations. Though the SaaS world is reasonably understood, it’s the infrastructure cloud that is creating an enterprise cloud war. Just think about the flurry of announcements and assertions about the big boys of technology taking sides with various cloud platforms or hypervisors:

Therefore, as happens in enterprise IT, large providers are partnering with all the known players to offer services across different markets, technologies, and customer type. It is evident that the large enterprise providers are choosing commercial platforms for private cloud and open source for public cloud offerings. Unfortunately, this whole muddle of messages have left buyers in an increasingly dense smoke cloud of confusion regarding vendor lock-in, maturity of technologies, reliable support for platforms, services around cloud, etc.

Granted, the implementation architecture of these cloud platforms/hypervisors are in some respects similar, yet the way they handle files, storage, virtual LANs, etc., have sometimes subtle and other times very evident differences.  Customers need different tools and resources to manage these myriad of platforms, hypervisors, and technologies.

However, the premise of cloud was based on standardization and simplicity, wherein customers were simply supposed to self-provision their infrastructure needs irrespective of the underlying platform, and manage it with minimal effort. But the ecosystem doesn’t seem to be evolving in that manner. Rather, it appears to be becoming more confusing and a personal dual between technologists and supremacy of technology than an attempt to improve enterprise IT delivery. Indeed, with so much variation in cloud middleware, how can we expect simplicity and standardization? Which leads to the all important question, will the cloud end up being another technology silo or will it transform the enterprise IT landscape?

To cut through this complex maze of intertwined offerings, buyers must understand the nuances of different cloud technologies, including their impact, limitations, costs, and use specific to their own ecosystem. Approaching it in this manner, the cloud can be a real game changer. Providers will keep on overselling and hyping up their offerings and the buyers require relevant skills to evaluate these offerings for their requirements.

Of course, this is easier said than done. While it’s a given that the enterprise technology world can never be imagined to have a single technology, system, or innovation, and differences will always prevail, there is a dire need to simplify the entire cloud paradigm in terms of its architecture, standards, implementation, usage, and evolution. Too many complexities may scare buyers, and the industry may miss out on exploiting a once-in-a-generation idea.

Will Platform Wars Freeze the Enterprise IaaS Market? | Gaining Altitude in the Cloud

As we work with our clients to understand the implications of Next Generation IT technologies, it’s clear that large enterprise adoption of public cloud IaaS is progressing more slowly than other types of cloud services (e.g., SaaS, private cloud). When we ask ourselves “why,” we continue to come back to three critical issues:

Certainly we’re finding that these issues are reflected in enterprise IaaS adoption patterns that are not quite what many in the enterprise CSP vendor community had hoped for at this point. Namely we’re seeing:

So where are we headed?

In general, enterprises are obviously not comfortable with the current risk / return profile associated with public IaaS and hybrid cloud models. We believe one of the few levers that would pull both components of this ratio would be a cloud management platform that would enable true workload portability / interoperability and policy enforcement across private, public and hybrid models. Not surprisingly, competing enterprise cloud vendor platforms, standards and ecosystems are emerging around VMware, Open Stack and Amazon (and to a limited extent Microsoft) to address this market gap. Several major announcements over the past several weeks that have served both to partially clarify and muddy this evolving landscape at the same time include:

Most major enterprise IT vendors are still hedging their bets and publicly keeping feet in multiple camps. With the marketing engines in overdrive it’s difficult to understand what commitments vendors are really at the end of the day making to the different platforms. In fact it’s quite instructive to take a look at who’s putting their money where their mouths are when it comes to open source efforts like Open Stack, not just in terms of sponsorship fees but also developer contributions.

Historically IT platform markets end up with a dominant leader and one to two credible challengers that end up with 2/3 to 3/4 of the market, with the remainder shared among niche players. When we take a look at the enterprise cloud operating system or management platform market, we don’t see why it would be any different here, though we’re obviously still a long, long way from the end game.

The critical question in our mind is: Is a cloud platform market shakeout required for enterprise adoption of IaaS to accelerate and hit the tipping point? If so, we could be waiting a long time.

What are your thoughts?