On 18th December 2014, Atos, a leading European IT service provider, announced the acquisition of the IT outsourcing (ITO) business of Xerox. The ITO business was part of Xerox’s services unit that also delivers Document Outsourcing (DO) and Business Process Outsourcing (BPO). The acquisition does not impact Xerox’s DO or BPO businesses, and signals an intent from Xerox services to focus entirely on those businesses.

Atos is paying US$1.05 billion in cash with an additional consideration of US$50 million subject to fulfillment of certain conditions, and will add ~US$1.5 billion of ITO revenue to Atos’ topline. Post completion of the acquisition, revenues from the United States will almost triple for Atos, making it the single largest operating geography. This acquisition will also add 9,800 professionals to Atos’ existing 85,000+ employees. Further, Atos will become the primary IT services provider to Xerox (~US$240 million annual revenue) and also have the right to first refusal on collaborative opportunities with Xerox. The acquisition is expected to close by Q2 2015.

Atos has faced perennial organic growth challenges with 2-4% annual revenue decline that it countered by large acquisitions such as Siemens Information Systems in 2010 (for US$1.1 billion) and Bull in 2014 (for US$830 million). Both of these were focused primarily on the European region. Xerox ITO derives ~93% of its business from North America with an estimated 250+ clients in this region. Xerox’s ITO business (acquired with ACS in 2010), has witnessed growth of above 5% CAGR over the last 5 years. This should help Atos partially address its own growth challenges.

Atos’s 2016 ambition is to become a Tier-1 “global” (read non-European) service provider with significant presence in the North American region for traditional and next-generation services such as big data, cloud, and digital. The acquisition provides a strong foothold in the North American market that is growing faster than Atos’ European stronghold. Moreover, Atos’ plans of achieving ~US$1.2 billion from North America by 2016 are easily surpassed by this acquisition. Xerox ITO will more than triple the contribution of the U.S. market and increase the region’s share to 17% from the current 7%.

Atos performed an extensive due diligence on assets and analyzed over 85% of existing Xerox’s ITO contracts to ensure alignment with strategy. Given that Xerox’s ITO business is exclusively focused on infrastructure managed services, Atos can possibly cross-sell system integration, consulting, big data, cloud and BPO services to these clients. Despite limited presence in North America, Atos is a recognized brand and now with Xerox’s capabilities, it can meaningfully penetrate this market. Conversely, for Xerox, it can leverage Atos’ European presence to expand its BPO business beyond its U.S. stronghold.

This acquisition is an important milestone in achieving Atos’ 2016 ambition of growing IT services by ~5% in 2014-2016 largely through “external initiatives”. Further, Atos has aggressive “offshore-leverage” plans for its global delivery organization with over 60% of incremental hiring planned in these regions. Xerox brings 40-45% of resources in these markets, which are higher than Atos’ overall offshore-leverage of 25-30%. This will also aid Atos’ 2016 ambitions of improving operating margins by 100-200 bps.

The two companies are also highly technology focused and could join forces to come up with new innovative ways of doing business particularly in the world of all things digital.

For Xerox, the divestiture of the ITO business signals a strong commitment to the DO and BPO segments within services, and will allow Xerox the capital to continue making investments in advancing service delivery capabilities in the BPO market which is facing significant disruption due to technology and service delivery automation.

History indicates that acquisitions fail due to a variety of reasons, the biggest being culture misfit. However, we believe it’s impossible to predict the outcome of an acquisition based on cultural conflicts and therefore, this is best left for the future.

Yet, there are some risks and challenges Atos will needs to address. For example, despite Xerox adding to “low-cost” headcount, Atos still significantly lags major Tier-1 providers such as IBM, Accenture, TCS, and Capgemini. These incremental low-cost resources do not meaningfully enhance Atos’ commercial flexibility to offer attractive pricing to its clients. Xerox ITO has a long-tail of clients where ~80% of clients contribute only ~15% of revenue. Atos may need to trim this long tail and carefully evaluate Xerox’s presence in the mid-market segment. Moreover, the aspiration of selling IT services to ~800 of Xerox’s BPO clients will require sustained efforts given a significant number of these will already have strong incumbents.

Atos is making considerable investments in digital and cloud services with its Canopy subsidiary and recent acquisition of Bull. However, it lags peers such as Accenture, Capgemini, and IBM in offering big data and digital services. Despite Xerox’s ITO investments in cloud (eight private cloud set-ups, seven multi-cloud hubs), it is not recognized as a leading cloud provider. We believe that the Xerox ITO addition will not add meaningfully to Atos’ branding for cloud services in the North American market. From a scale stand-point, a US$1.7 billion revenue from North America pales in comparison to IBM’s $20 billion, Accenture’s $10 billion, TCS’ $7 billion and even “European” Capgemini’s US$2 billion from this market.

Moreover, Atos will need to closely manage internal organizational dynamics as the North American operations become increasingly influential. Currently most major decision making is centered in Europe. Atos will need to ensure that the North American leadership is suitably empowered to grow the business and meet the aspirations of becoming a major provider in that region. The go-to-market and sales strategy need to be adjusted with greater decision-making authority given to the front line team in North America.

Both organizations are very committed to making the acquisition a success with a formal strategic governance board including the respective CEOs to ensure smooth collaboration. Moreover, they will combine go-to-market strategy for select products and services across the client base. We expect Atos to transform the pure “managed service” focus of Xerox ITO by introducing its broader next-generation services to North American clients. We believe Atos has the capabilities and the investment DNA to carry out this transformation. The combination creates a powerful alternative infrastructure services provider for the North American market. Xerox ITO provides a good platform for Atos to strive towards its aspiration of becoming a major North American and Tier-1 global IT service provider. Whether this provider can offer next-generation cloud and digital services, and whether the North American clients will embrace it, only time will tell. 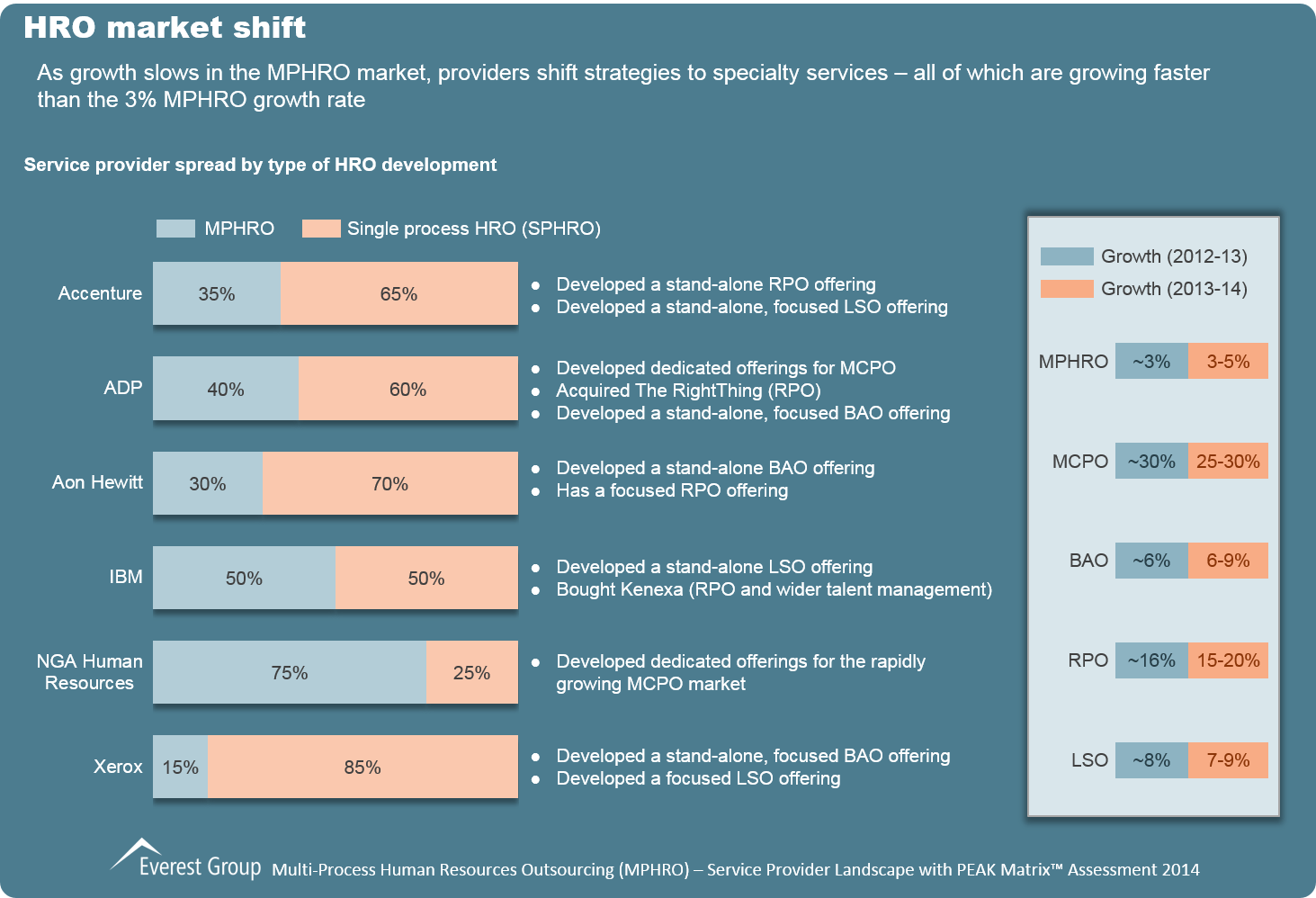 As growth slows in the MPHRO market, providers shift strategies to speciality services – all of which are growing faster than the 3% MPHRO growth rate

Is Xerox Changing Direction or Is It More of the Same? | Sherpas in Blue Shirts

I’m watching with great interest the current change in leadership at Xerox. They just announced that Lynn Blodgett will retire at the end of 2014 and Robert Zapfel will join the firm on April 1 as president of Xerox Services and EVP of the corporation, reporting to the chairman and CEO. Bob has had a distinguished career for 35 years at IBM and helped transform Big Blue’s services business to profitability. Will Xerox now use the IBM playbook?

Here’s a short version of the IBM playbook:

In many respects Xerox and IBM enjoy a similar position. They both have strong balance sheets with which to finance acquisitions, they both have golden brands that engender trust, and they both have R&D that is the envy of the industry. Arguably Xerox has already been walking down the IBM path to some extent. It will be interesting to see how Bob shapes the future of this proud and venerable industry leader. What do you think?