Last month, WNS acquired Denali Sourcing Services, a procurement outsourcing company, to further strengthen its broader finance and accounting offering with a specific focus on the sourcing and category management domain. This was a strategic move on WNS’ part to drive enhanced value for its clients. The acquisition will allow WNS to provide an end-to-end Source-to-Pay (S2P) offering without any external dependency. The transition is expected to be mostly smooth, as WNS and Denali have been long-time partners and already have a healthy working relationship.

For the broader market, this acquisition reiterates the importance of people skills, experience, and domain knowledge in procurement services. While technology is important in any business process function, procurement outsourcing relies heavily on individual talent. Several providers have tried to develop these capabilities in-house with limited success. A major obstacle has been the short supply of sourcing talent pool, compounded by the fact that it is very challenging to provide strategic sourcing services from an offshore location.

In today’s procurement world, automation is becoming table stakes, speedily wiping out the transactional part of the work. Intense competition is further driving down pricing, leaving everyone to operate on wafer thin margins. As P2P becomes commoditized, providers are increasingly identifying the need to build sourcing capabilities. They have realized that, in addition to higher revenue and profit margins, sourcing capabilities are necessary for long-term success in this space.

One of the fastest ways to build sourcing capabilities is an acquisition. Service providers have been on a constant lookout for players with strong sourcing capabilities, and have not hesitated in making such acquisitions. For example, Accenture, one of the top players in this space, acquired Ariba’s sourcing and BPO services way back in 2010. In 2013, it further expanded its services by acquiring Procurian, another leading procurement services provider.

The big question that follows is why other players have not made acquisitions in this space to strengthen their hold on the market. The answer is simple. There are not a lot of strategic sourcing and category management players with considerable scale. Denali falling out of the race means that the list further shortens. Each acquisition puts extra pressure on the remaining players to prioritize procurement and make a quick decision. So WNS’ acquisition of Denali could potentially be a starting point for some hectic market activity. 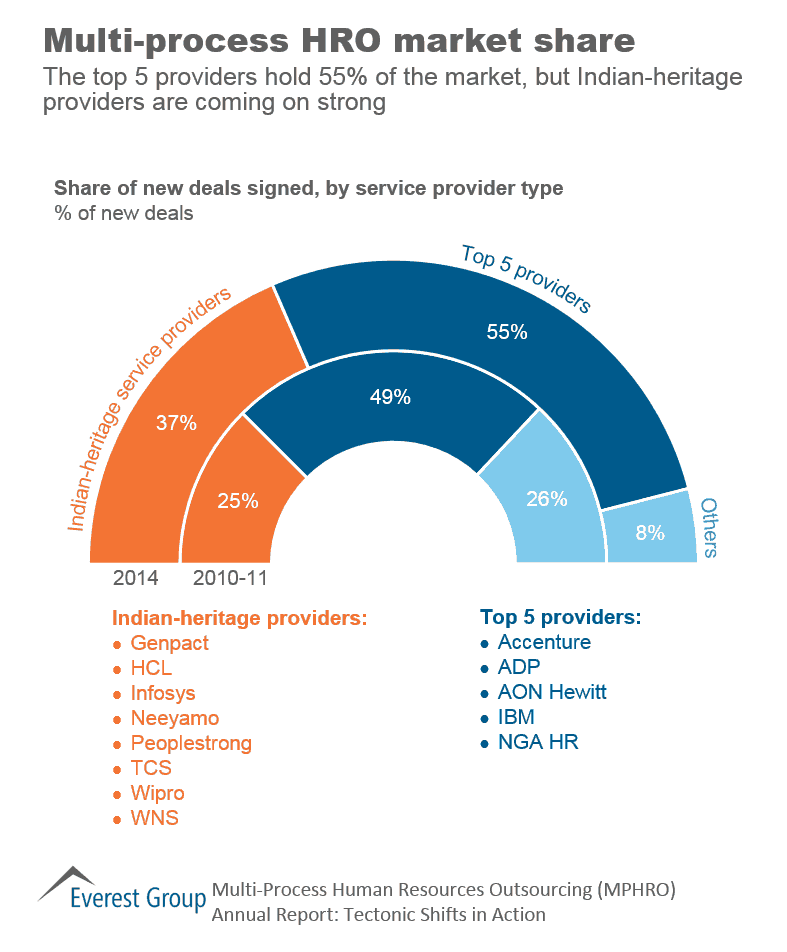 The top 5 providers hold 55% of the market, but Indian-heritage providers are coming on strong

The ABCs of WNS | Sherpas in Blue Shirts

The jury’s in — the back-to-basics strategy is working at WNS. The results of this strategy pop out in its FQ3-14 earnings report. Net revenue increased 5 percent to $120 million. Gross profit increased 16 percent year over year to $45 million. SG&A expense went down four percent. Adjusted earnings per share rose to $0.38, above the consensus of $0.36. During Q3 WNS also signed its fourth-largest deal to date.

When Keshav Murugsh took over the CEO reins at WNS, he instituted a new management team, simplified the value proposition, focused on the arbitrage market and drove a more aggressive sales strategy. It’s a classic back-to-basics strategy, and the market is rewarding WNS in revenue growth, an eye-popping shareholder value and 107 percent year-to-date returns through December 2013.

Many of the Indian service providers are going back to the basics after investing in the products space in lieu of the services space. WNS was one of the first to return to this basics strategy, and Infosys followed closely on its heels with a similar strategy. Like the ABCs are basics for the benefits of reading and writing, the Indian services firms are finding fertile ground in getting back to the basics with increased execution, and the results that follow show customers and shareholders are enriched.