On 25 April 2017, U.S. President Donald Trump moved one step closer to instituting new regulations for granting H-1B visas. At the same time, many IT service providers – especially those of Indian-heritage –moved one step closer to realizing their worst fears! The threat of visa reforms became real when President Trump ordered an inter-departmental review of the H-1B visa program, which would ensure formulation of regulations for hiring only the most skilled or the most highly-paid professionals and “would never replace American jobs.”

While it is universally acknowledged that a stricter visa regime will negatively impact most service providers’ onshore margins, particularly the offshore-centric providers that follow the “landed” resource model (i.e., a delivery model that hires resources from offshore centers to work in the U.S.,) it is important to examine the true nature of this impact. The exhibit below indicates the possible impact on onshore margins under various visa reform scenarios. 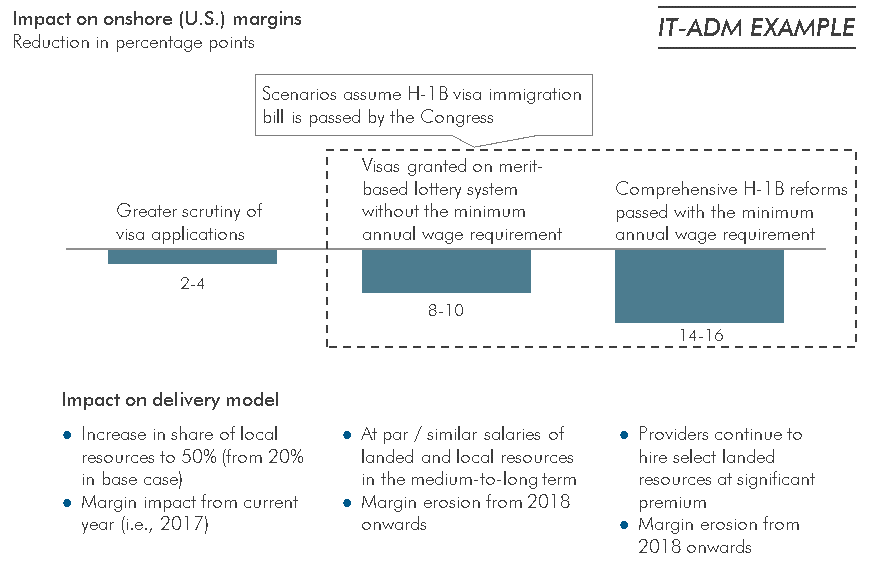 Even in a situation where the visa reforms do not translate into full-fledged regulation (the most ideal scenario for Indian-heritage service providers) we expect far greater scrutiny of H1-B visa applications, leading to fewer visa grants. Even in this scenario, we expect more onshore hiring by IT service providers to meet their talent requirements, leading to reduction of service provider margins by 2-4 percentage points.

The probability of the above happening has become more dubious, given recent developments, and it is highly likely that visas will be granted based on either skills/merit or minimum wage requirements of US$130,000. In either case, service providers will need to hire a much higher share of local resources. This further complicates the situation for Indian-heritage providers, as they have a smaller foothold in the U.S. talent market than do the global providers. Whether Indian-heritage or global, hiring landed resources at some/all levels of the delivery pyramid at the minimum salary levels of US$130,000 could drop service provider margins by as much as 14-16 percentage points, resulting in negative returns on onshore deals, at least in the short-term.

While none of the scenarios paint a rosy picture for service providers, the impending visa reforms may act as a catalyst for them to develop more automation solutions and front-end technology products and restructure their talent hiring and value proposition. Interestingly, while onshore resources will increase in U.S.-based contracts, the overall portfolio-level offshore ratios may also marginally increase with providers pushing the offshoring lever to protect their overall margins.

In a recent blog entitled, “Is rising costs the only impact immigration reform bills will have on the services industry?” our colleagues wrote about a variety of potential effects Representative Zoe Lofgren’s (D-CA) “High-Skilled Integrity and Fairness Act of 2017” H1-B visa proposal would have on numerous parties.

Let’s look squarely at the potential impact of these changes on total contract value (TCV). Some of the key IT service providers, especially Cognizant, HCL, Infosys, TCS, and Wipro – all of which rely heavily on “landed” resources to provide IT services in the U.S. – would have some major decisions to make, ranging from tactical, such as recruitment strategy, to business strategy, such as margin cuts.

If passed, the bill would most likely take away the landed resources cost advantage. Having assessed numerous IT ADM contracts in the last 12 months, Everest Group conducted a simulation to represent a typical three-year IT AM deal, using industry standard offshoring, staffing pyramids, and local-to-landed resource ratios. Our simulation showed that the removal of the difference in pricing of local and landed resources alone would result in a 5-6 percent increase in TCV, not taking into account any auxiliary impact on service providers’ cost (recruitment, organizational restructuring, etc.)

Already pressed for margins, IT service providers would try to pass the TCV impact on to their enterprise clients. As it is very unlikely clients would be willing to bear the cost increase, it would remain with the providers. As a margin decline of 500-700 basis points would significantly disrupt any company’s financial standing, the providers would need to deploy countermeasures to mitigate this impact.

To reduce the impact on margins, service providers could use levers such as degree of offshoring and staffing pyramids. Our simulation showed that increasing offshoring by about 2-3 percent resulted in a 50 percent decline in the impact of TCV (essentially lowering the increase from 5-7 percent to 2-3 percent) for a typical three-year ADM deal. While the impact on more complex deals might not be easy to mitigate, our simulation demonstrates there is hope for service providers who play smartly and are proactive in adopting strategies to counter the potential impact of any negative reforms.

Another way service providers can drive down their costs is through automation. For example, key aspects of onshore resources’ work include coordination with offshore resources for alignment of work and managing timelines and quality objectives. If automated, these aspects could significantly nullify the impact of onshore cost increases. And with 300-400 basis points at stake, providers might finally have the motivation to adopt automation at the enterprise level, rather than as a deal- or client-specific objective.

It will be very interesting to see if service providers are able to convince the enterprises to share some of the increased cost burden. What’s your guess?

When a tax of this scale is paired with visa reform which if implemented in its most aggressive form would raise the landed cost of the Indian firms by as much as 20% and an “American first” political climate we can see a substantial attack on the current model which is indeed worrying to every Indian Service executive. I would stress that the boarder tax has the most uncertainty around it at this time as it faces substantial resistance in both parties,” said Peter Bendor-Samuel, CEO, Everest Group. Read more at the Economic Times.

The Trump administration’s move to table H1-B visa bill in the house has led to a bloodbath for IT services stocks. While there appears to be near unanimity on the “absurdness” of the move, there is a silver lining most experts seem to have missed. I’ll explain this through two acts that have played out.

Act #1: Old Wine in New Bottle
In a November 2015 blog (“My Digital is Bigger Than Yours” and The Technology Pulp Fiction), I explained the rationale behind my cynicism for buzzwords that were driving the discourse on IT services. The story being told was that IT services was undergoing a paradigm shift in innovation. However, instead of witnessing a real shift in strategy, talent model, and offerings, what we have seen is a largely marketing driven illusion of change. Digital, cloud, automation, and cognitive are terms that are being thrown around without caution, giving an impression of disruption in services delivery. In reality, it’s just the natural course of progression in IT services getting embellished by these buzzwords. Analysts know it, service providers know it and – no prizes for guessing – buyers know it too.

As our January 2017 enterprise pulse report on buyer (Dis)satisfaction highlighted:

Point 3 above is the reason why, as much as I would like to take service providers to task on this pretense of transformation, I believe that enterprise IT must take its fair share of the blame. They have been running mediocre, unimaginative, and long past use-by-date procurement practices. There are two primary reasons behind this inertia:

Net-net, labor arbitrage, offshoring, and time & materials still continue to drive the lion’s share of IT services. In the current scenario, despite all the “digital” and “cognitive” washing, there is no way this reality can be swept under the rug. Does this mean that services transformation is a lost cause?

Act #2: And then Trump happened….
All this is getting Trumped now. Visa regulations mean less access to the same cheap labor. Now, instead of paying lip service to service delivery automation, enterprise IT and providers will actually have to think about hyper-automation to keep the lights on and manage margin improvement expectations. Things will have to move faster towards autonomics and/or cognitive for service providers to stay afloat and enterprise IT to stay relevant for CFOs.

My message to the ecosystem to which I belong? – It’s time to put your money where your mouth is!

Latest Visa Reform Proposal: How Bad is the Bite on Services? | Sherpas in Blue Shirts

For those of us who follow immigration reform, particularly with a view to how it would affect the services industry, the latest proposed legislation coming from Senator Grassley out of the U.S. Senate is troubling. If his proposals become law – and one might imagine they would have some possibility, given he’s the chairman of the committee with oversight over immigration – they would be more restrictive to the offshore services model than the previous legislation that the bipartisan Gang of Eight proposed two years ago.

Specifically, this legislation would, like the previous legislation, fundamentally challenge the visa requirements, both around H-1B visas as well as the L-1 visas. It would significantly restrict the number of H-1B visas or the ability to leverage the H-1Bs and L-1s that can be used in the landed-onshore model as well as raise the fees for those visas.

Most troubling around this new language is that it would include L-1s as well as H-1Bs, therefore significantly reducing the flexibility of service providers that heavily use offshoring. On its face, this proposed legislation would be a direct challenge to the offshore model that the services industry currently uses. The bark is pretty bad.

But there is some good news: The bark is worse than the bite.

At least for the next two years, this proposed legislation has almost no chance of becoming law. It is unclear whether it has sufficient support in the broader U.S. Senate and certainly is completely counter to the U.S. House’s point of view around visa reform. It lacks broad support in both the Democratic or Republican majorities.

So why is Senator Grassley bringing it up at this time?

Recognizing that there is almost no chance of legislation becoming law before the next president is elected, let’s not dismiss the potential for adverse impacts completely. Legislation, after all, is only part of the equation. There is clearly a growing consensus in the bureaucracy that the H-1B and L-1 visa model needs closer scrutiny, especially for service providers that are aggressive users of the model.

I think we can expect to see the government continue to revisit and tighten down the interpretation of the existing laws. It will be nettlesome and will affect the services model at the margin. It’s likely to create a small but incremental impact on the model; however, I believe it won’t cause a decisive model change.