The news of another big round of funding for UiPath, US$225 million series C, and a valuation of US$3 billion created a lot of excitement and amazement in the market. It followed on from Automation Anywhere’s whopping series A funding round of US$250 million in July, which valued the company at US$1.8 billion, and which surpassed UiPath’s earlier series B funding of US$153 million and a valuation of US$1 billion in Q1 2018.

These valuations are phenomenal. In UiPath’s case, the rise from US$1 billion to US$3 billion in less than six months is, I believe, unprecedented. You might think that investors are living on a different planet than us ordinary folks, and that this kind of valuation is plain wrong. I beg to differ.

Investing in the Future of RPA

My case rests on the rapid increase in market adoption and the huge investments that vendors are making in their platforms. As much has already been said about the fast rate of enterprise adoption, there’s no need for me to repeat it again here. Jumping to the second part of my case: RPA today is not the RPA that launched this market three to four years ago. The original developments lacked many of the features that we see today, e.g., computer vision to pick objects on the screen and robust control panels. Similarly, tomorrow’s RPA will be superior to today’s.

As someone who assesses RPA technology on an annual basis, I see a fast rate of product development, not just year on year, but in some cases quarter by quarter. 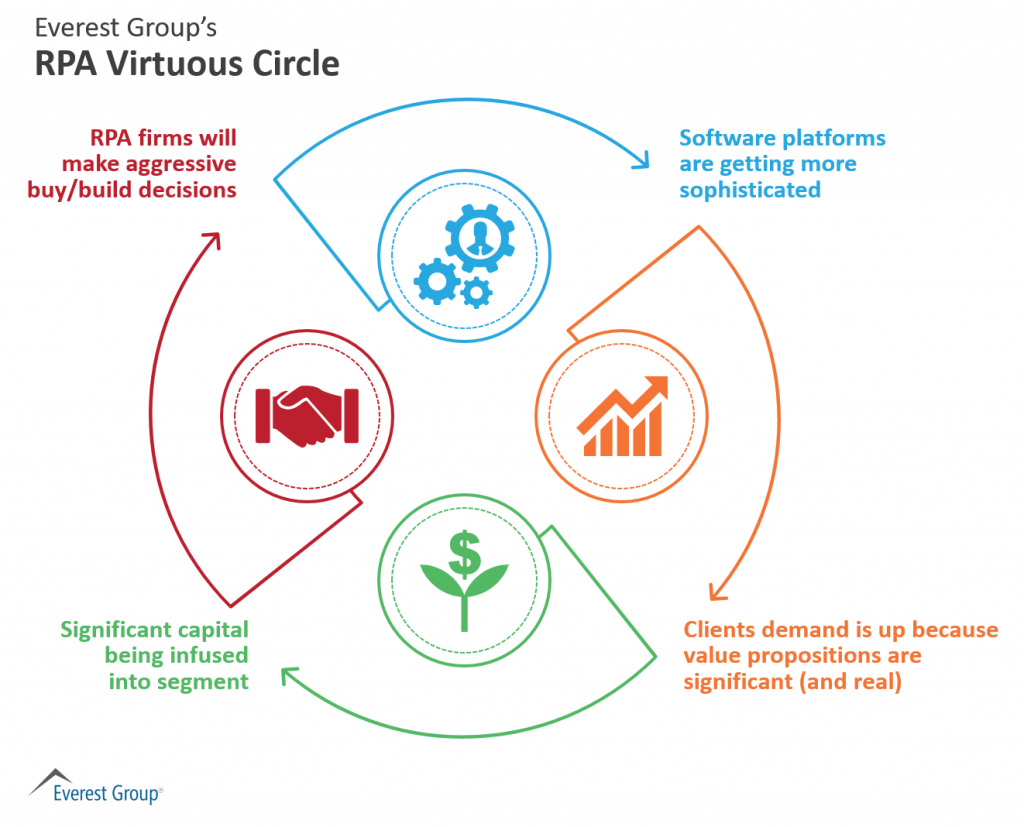 Much has been said of organizations struggling to scale their deployments. I completely agree with this, and for a while I’ve been asking vendors to do something about this issue. I am delighted to see that they have been listening and are investing in features for scaling. These include enhanced robot run time control and management features including intelligent control systems for dynamic workload balancing, auto-scaling, and even identifying processes for further automation. Another major stream of development is turning RPA platforms into the glue that holds together business process management systems (BPMS), different varieties of machine learning, and narrow artificial intelligence. These will ultimately be integrated and will combine seamlessly to provide end-to-end process automation.

While vendors do their bit for scale, organizations should also examine their deployment models for RPA and take a more programmatic approach. Automation is going to be a serious competitive differentiator, and a programmatic approach would significantly speed up organizations’ adoption and realization of desired outcomes. Everest Group’s RPA Pinnacle study highlights some of the approaches that organizations have taken to achieve excellence in RPA.

Of course, these enormous investments in RPA do carry some risks. There is the possibility of tech giants bringing their own RPA solutions to market, in turn pushing out the current RPA vendors. But that wouldn’t be easy to do, as the existing vendors have gained a lot of hard to emulate know how in the past few years. And any one of the existing RPA vendors could be acquired in a major acquisition, but then the investors would get the handsome returns they anticipated…just in a different way.

Another reason for my optimism about the recent investments in RPA and vendor valuations is that I recently got a glimpse into the future of business automation by looking at manufacturing. On a visit to Siemens Digital, I saw how the concept of digital twin and simulation of manufacturing processes is helping speed up production times and efficiency, even in manual/human processes.

For years, corporate global services functions have attempted to copy manufacturing principles, e.g., adopting Lean and Six Sigma methodologies. Today, they have moved on to automation, which manufacturing adopted decades ago. Having started on automation of global services, enterprises are not going to turn back. They will continue to follow manufacturing’s lead.

Leading organizations are already giving their processes version numbers with supporting documentation, having taken each step through a rigorous Lean Six Sigma methodology.  On the automation front, while the focus has been primarily on tactical needs, it will increasingly move to outcomes and the finished “product,” as in manufacturing.

We will see enterprises develop digital twins of their processes or robots, and run complex functions end-to-end in virtual reality before committing to the final model for deployment in the real world. Future versions of RPA will have to support these requirements, and that is where some of the millions of funding will be spent; on product development and advanced features.

Today’s RPA products are paving the way for a far bigger change in automation of global services than we have seen to date. They are the building blocks of the platforms of the future for an inevitable automation journey that every organization will have to take sooner or later. That is why the current group of vendors are so attractive to investors. They are betting not just on today’s growing revenues, but what is to come.