Register for our November 9 expert panel, The Talent Shortage is Real. Five Things We Now Know. 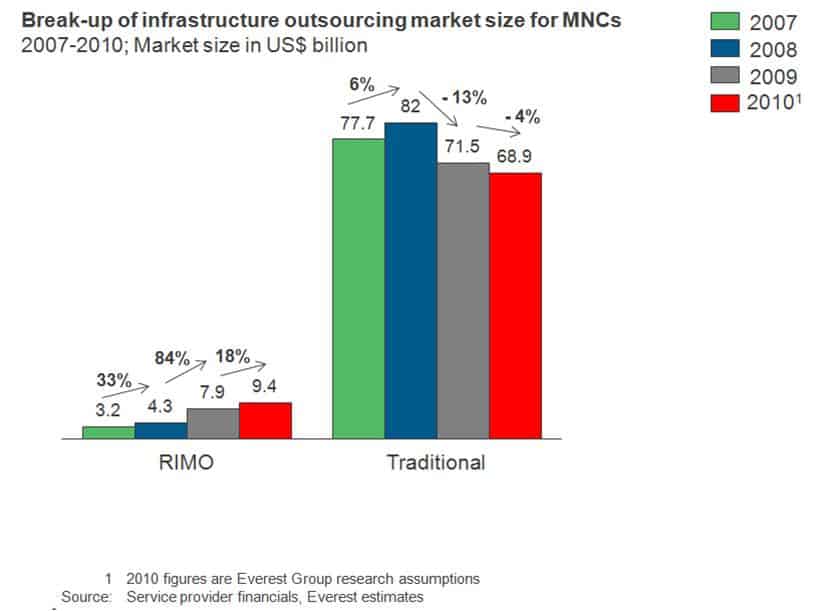 The news media a couple of days ago reported – not entirely unexpectedly – that Wipro is in talks to sell the U.S.-based data center assets it acquired when it purchased Infocrossing for US$600 million in 2007. Interestingly, the business was referred to as “non-core.”

The message the acquisition at that time sent to the market was that buyers are more comfortable in outsourcing end-to-end infrastructure to providers with their own data centers.

But the infrastructure outsourcing (IO) market has changed quite a bit in the past four years. Indeed, our Decline of Traditional Infrastructure Outsourcing research highlights the challenges in traditional IO and discusses the fundamental shift wherein newer and nimbler models such as RIMO and other next generation infrastructure services are outpacing and outsmarting the conventional IO strategy. With this news, it appears Wipro’s management agrees that the dynamics of IO have changed and that it has become largely immaterial whether or not offshore providers own a data center. And coupled with industry developments in which Indian IT providers are partnering with local data center providers to win IO deals against MNCs, Wipro seems to understand the broader strategic fit of these assets.

Other Everest Group research (e.g., Remote Infrastructure Management – “RIMO Strategy – Stick to the Basics, but Fine-tune Too”) has emphasized that Indian providers should focus on their core competencies of simpler engagements, global sourcing, resource management, flexibility, and asset-light strategy as the core of their IO services. This is not to say they should not move up the value ladder, just that they should not fundamentally alter the DNA of their infrastructure business.

Will this change the basic nature of the outsourcing deals in which Wipro can participate? Not really. Wipro saw early gains leveraging Infocrossing and, subsequently, carved out its place among traditional IO providers. After exploiting Infocrossing’s potential in traditional IO by providing integrated infrastructure services, Wipro is divesting out of the non-core assets, and that makes real sense. It appears Wipro has realized that the value proposition of Indian infrastructure service providers is different from that of typical MNCs and, therefore, is realigning its strategy.

While it does impact its business in terms of offering large end-to-end complex IO deals, we need to be careful in generalizing this as a hindrance toward its growth. Indian providers should walk away from deals that require them to perform tasks that are not in sync with their core DNA, rather than attempt a dangerous straddling strategy. Therefore, although Wipro may no longer be willing to offer hosted IO, we believe it is better off focusing on typical offshore infrastructure offerings augmented with its integrated infrastructure services through Infocrossing.

Will this impact Wipro’s cloud play? Not really. Most of the Indian providers are targeting cloud IT service/ orchestration/platform BPO to drive their cloud revenue than offering their own, in-house hosted cloud solutions. Moreover, if Wipro plans to develop its own data centers specifically for in-house cloud solutions, nothing stops it from doing so (e.g., Infosys earlier offered its SaaS-based iEngage platform through partner data centers and is now offering the solution in its own data centers as well).

Overall, divesting Infocrossing’s non-core assets could be a great help to Wipro, as the growth of its infrastructure business has lagged its Indian peers. We can count on Wipro’s management to ensure that the strategic advantage Infocrossing brings, especially in key verticals, such as healthcare, will continue. This will make more management and operational bandwidth available to focus on the core capabilities needed in infrastructure services that are fine-tuned with the general strengths of Indian infrastructure service providers.

HP’s Strategic Decisions – What’s the Next Shoe to Drop? | Gaining Altitude in the Cloud

In 1729, Anglo-Irish satirist, essayist, and political pamphleteer Jonathan Swift penned a satirical paper suggesting that to prevent the children of poor people in Ireland from being a burden to their parents or country, and to make them beneficial to the public, the Irish should eat their own children. Driving toward services leadership may require HP to make a similarly tough (yet certainly less ghoulish) choice – is it time to for HP to accelerate the next generation progress of its service business by actively cannibalizing the traditional IT infrastructure outsourcing business?

The IT infrastructure outsourcing market has already moved through a state of slow to zero growth into a phase of contraction. 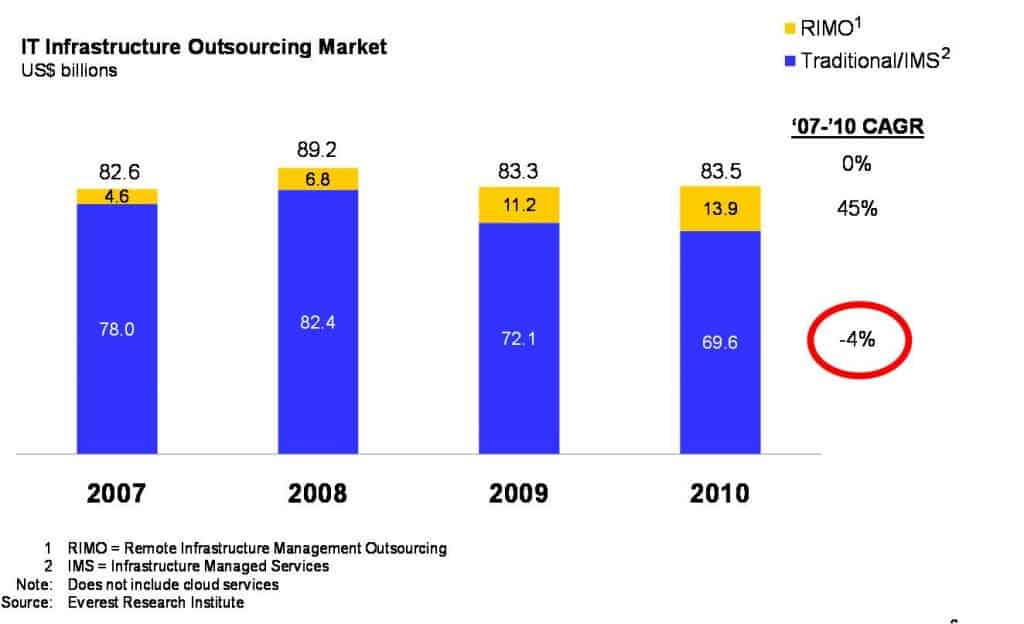 The primary force disrupting this market has been the growth of the remote infrastructure management outsourcing (RIMO) model, which has effectively replaced traditional IT infrastructure outsourcing (ITO) contracts with a more flexible and cost effective alternative, resulting in services that generate as little as 25 percent of providers’ ITO revenue. (To clarify why providers only capture 25 percent of the revenue… with RIMO offerings, hardware, software, and data center costs are retained by the customer.) This disruptive trend may accelerate rapidly as it combines with the emerging forces of next generation data centers and cloud computing.

Based on HP’s recent bold strategic decisions around its non-performing businesses including PCs, TouchPad platform, and WebOS software, one wonders if it will also take a page from Swift’s proposal in setting direction for its services business. Doing so could enable it to accelerate its positioning as a next generation IT leader by actively eating its legacy customer base by rapidly driving cloud and other next generation IT services into it. This would likely generate significantly higher profit margins but result in lower overall revenue levels. So why should HP contemplate such a painful move? In short, if it doesn’t, someone else will! In fact, reports are that IBM is already snacking within its customer base, significantly expanding its next generation penetration while keeping a close eye on sustaining/growing its profit pool. Additionally, some Indian service providers have specific offerings targeted precisely at replacing legacy infrastructure contracts with more agile RIMO relationships.

As the Irish would have found had they followed Swift’s satirical advice, HP will find this move extremely painful and extremely unpopular in some quarters (e.g., Wall Street). True it will find solace in higher margins of these next generation offerings, which in many instances may be two to three times higher than its current low margins, and enjoy higher growth (albeit from a much smaller base). But this will offer scant relief from the real and emotional pain of absorbing significant stranded costs while replacing each dollar of “traditional” revenue with as little as 25¢ to 50¢ on the dollar of next generation services revenue.

I read the recent announcements about HP’s strategy as increasing the probability that the company will take such bold actions. It seems willing to take strong and decisive actions such as shuttering its WebOS business, TouchPads, and phones, as well as spinning off its underperforming PC business…so why leave its services business out of the mix?