Accenture has beautifully moved into the number-one spot among transformational service providers. They snatched it from IBM, their biggest competitor for that spot.

How did they do it? Accenture created a significant gap between itself and IBM in two game-changing aspects: customer access and talent.

Accenture gained a leg up on IBM in customer access because it was better able to access the emerging business stakeholder groups outside of the IT organization. They were better able to communicate with the CFOs or business heads and leads, which helped increase Accenture’s credibility around transformation services. Discussions with the business stakeholders also gave Accenture visibility into large transformational opportunities.

In the second aspect, Accenture built a larger and deeper bench for consulting and systems integration (SI) talent than IBM.

Accenture has taken transformation services to a level that’s hard to beat.

But IBM has taken the challenge seriously and has been busily recruiting consulting talent. They started in the ERP arena and are now extending it to other areas. We’re seeing a lot of ex-strategy consultants showing up at IBM from Booz Allen and other firms.

So IBM is closing the gap created by Accenture in consulting. As they do that, they are starting to win back market share.

But then along came the dark horse, Deloitte.

Deloitte is contesting both Accenture and IBM for large transformation deals. But it’s able to be more disruptive to Accenture — in fact, the disruption is right along the same lines as Accenture followed to beat IBM.

Access to boards of directors and senior management suites has been a defining differentiator of Accenture and IBM compared to other providers in the transformational services landscape. But Deloitte is able to match them in this customer access aspect. And the dark horse provider has even better access than Accenture to the business stakeholder groups, particularly the office of the CFO, which is becoming increasingly important on large transformational agendas.

Deloitte also brings similar consulting and SI talent as Accenture, plus it has deep industry knowledge and industry practices; thus Deloitte is highly relevant on industry and domain topics, not just on technology.

But far more interesting is the central difference in the way Deloitte and Accenture approach transformational problems. Accenture tends to carve out the attractive outsourcing pieces and leave the asset-heavy risk-shifting pieces for others. Deloitte takes a much lighter touch and agile approach. The dark horse tends to reconfigure transformation agendas to be more of a consulting and SI effort and less of an outsourcing effort. This doesn’t work well with every client, as some prefer an outsourcing approach; but this lighter, more agile approach makes Deloitte’s offering more complete and distinct.

IBM is starting to narrow the gap that Accenture created. But Accenture is still the reigning king among transformational service providers. Both need to watch out for the dark horse as Deloitte has emerged as a tier-one transformational provider in the same category and same quadrant as Accenture and IBM.

There are other providers trying to get into the tier-one group. But that’s another story. Stay tuned for a future blog post on who they are and how they’re trying to compete.

During the past 25 years, I’ve seen many evolutions in IT, outsourcing, and advisory services. And one thing I’ve learned about these industries is that changes are constant and to succeed one must adapt to the changes. Yet the landscape of service provider firms is large and continuing to expand with organizations that do not adapt, and only try to maintain status quo on their solutions and services.

The global services market has been especially fraught with rapid and complex changes over the last several years, and these changes are forcing organizations to adapt how they address next generation sourcing to achieve their objectives and goals. Today it’s far more complicated than simply how to execute an outsourcing RFP process; outsourcing is one option, but is it the right sourcing option for your enterprise? Organizations need to take a step back, assess the available sourcing opportunities, and solidify a sourcing strategy that will leverage one or multiple options to achieve their objectives.

Drivers impacting the requirement for change include:

While facing these changes, organizations are still experiencing the same pressures and have the same requirements for cost savings, service improvements, access to skills, innovation, and best practices. As a result, organizations must now ask and address a very different set of questions than previously. It’s no longer, “What do I outsource, how do I do it, and how much can I save?” Instead, it’s, “What should I fully outsource/out-task/retain in-house, where can I leverage new technologies, what is the best blend of onshore/offshore, what is the ideal mix of Tier 1 and Tier 2 service providers, and what service delivery locations should I pursue/are required?”

Changes in the global services industry are not only impacting service recipients; advisors must also adapt their approach to appropriately serve their clients in the face of these new and more complex situations. It should no longer be about running a sourcing transition to determine what and how best to outsource, but about understanding all the potential strategies, how to optimize them, and how to operationalize the results. Advisors need to respect and appreciate their clients’ view of their environments, and should not encourage or try to force fit them into a standard or traditional solution. Taking this approach will allow for better decision making on how each individual client can best leverage the increasingly complex ecosystem of global services.

Here at Everest Group, next generation sourcing has become one of our key focuses. While we continue to assist with traditional outsourcing initiatives, we see the market changes quickly increasing the requirements for next generation sourcing.  An organization’s approach to this must address the creation of strategies that allow it to take advantage of multiple sourcing opportunities, service providers’ capabilities, technologies, and service delivery locations.

How is your business adapting to address next generation sourcing requirements, and what new tricks have you learned?

Is it possible? And if so, what needs to be changed in the current banking model?

There are several best practices banks must employ to achieve these objectives:

Let’s look at how Bank Z approached the problem.

First, it carried out work sampling and time studies to understand the breakdown of the employee activities during the day. The data helped it understand which activities were not essential to customer service and thus were ripe to move to the back office: 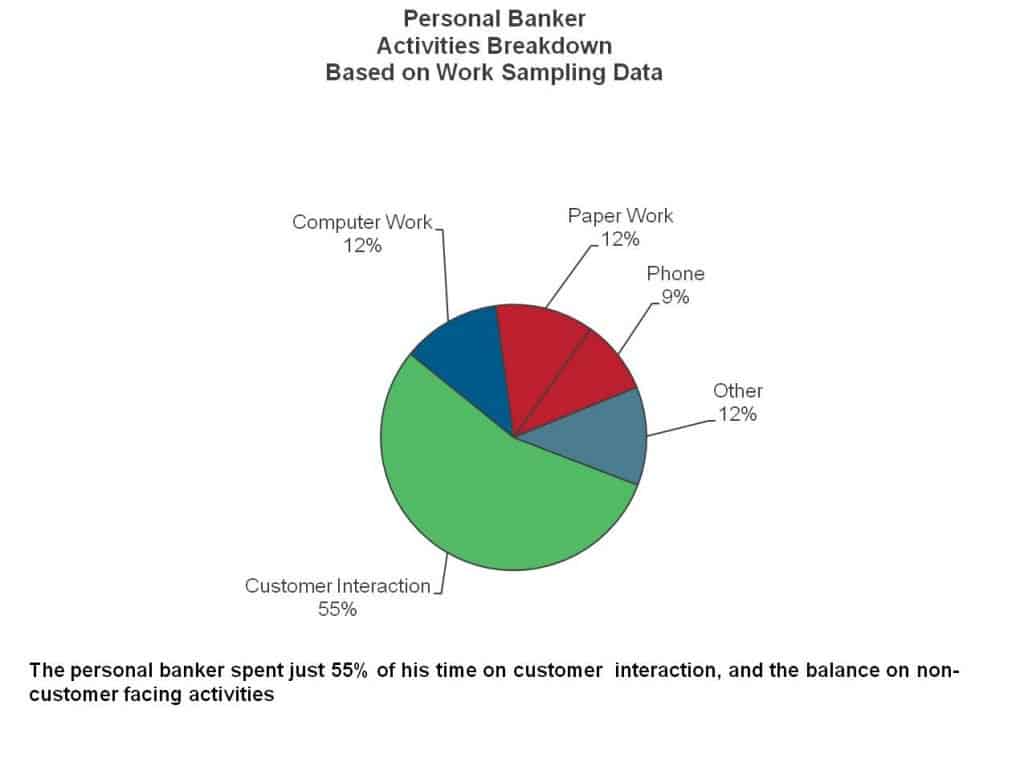 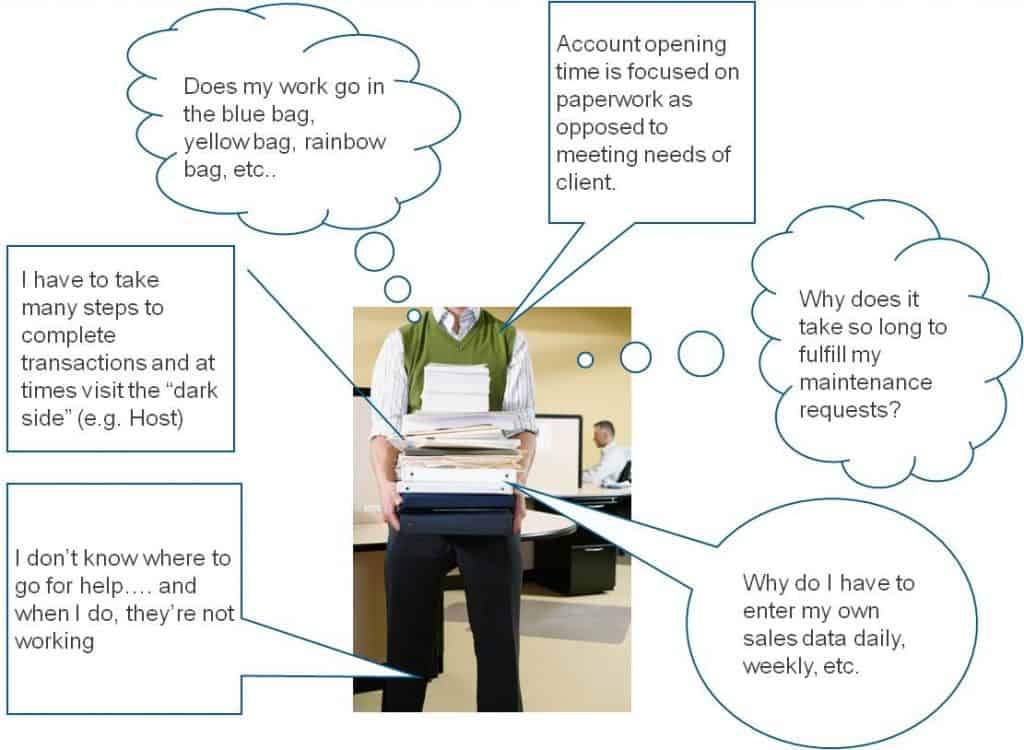 Third, it created process maps to capture current processes and identify areas in which it could enhance its efficiency: 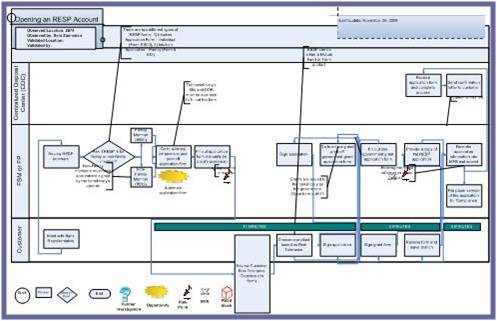 Fourth, it looked at how many transactions the FTEs in its branches were completing per hour to gain insight into FTE scheduling: 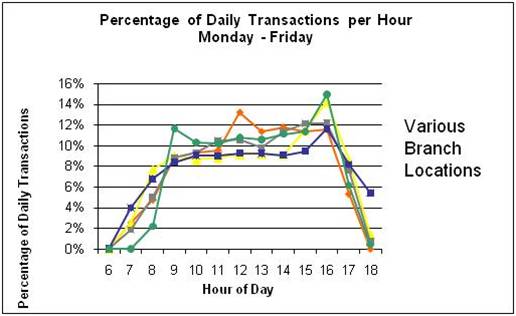 Fifth, it assessed, via work sampling, the queue size by hour/day/number of staff and identified that its allocation of resources to traffic patterns were out of alignment. It observed ranges from three service reps and no customers to five service reps and 19 customers.

Number of customers in the queue 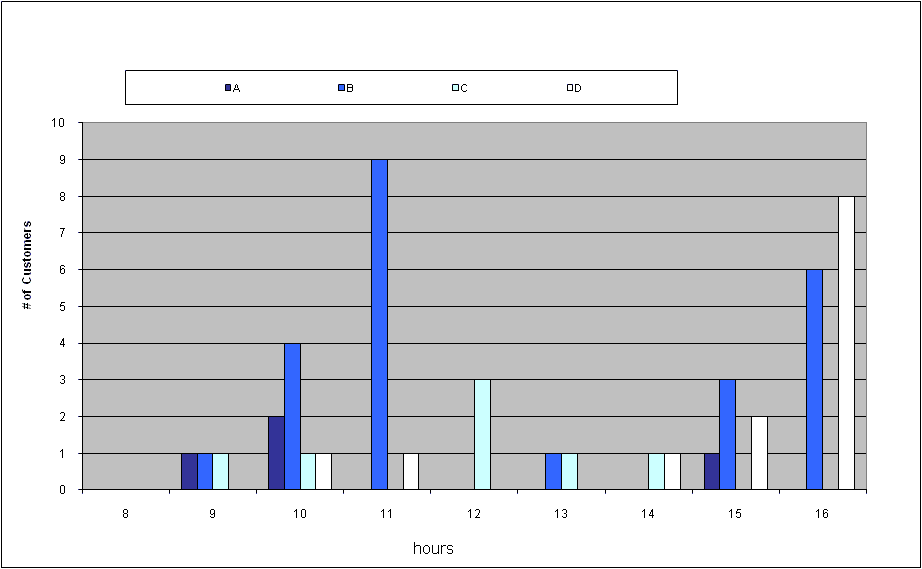 Number of staff vs. customers in the queue 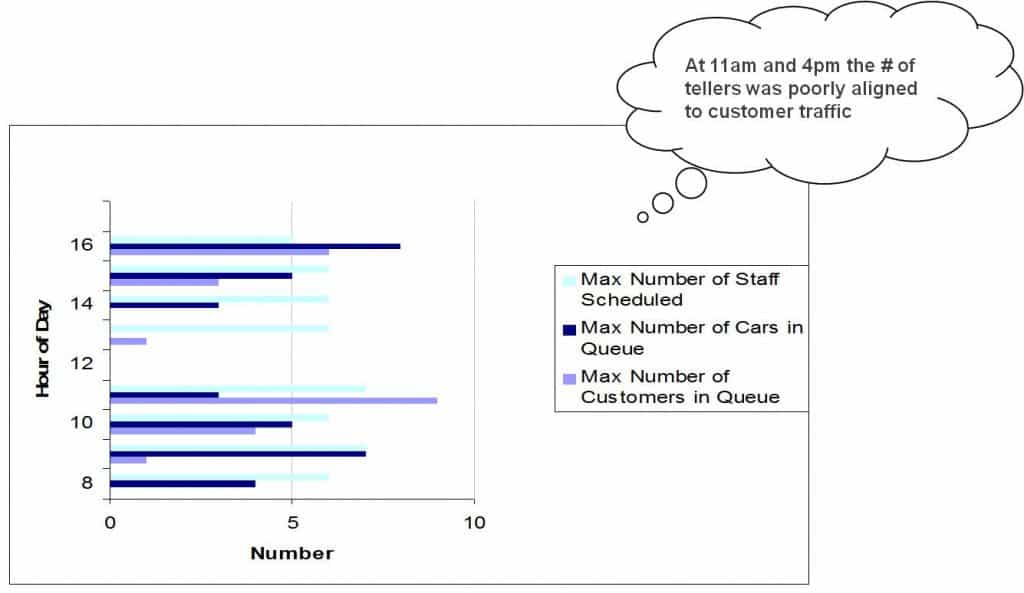 And sixth, it benchmarked the results from its data collection exercises across branch locations to identify non-value added activities, understand variability between the processes in the various branches, and create a game plan to modify processes bank-wide based on best in class practices:

By collecting data, understanding customer demand patterns, engaging cross functional teams to redesign processes, and shifting non-customer facing activities to the back office, Bank Z was able to enhance its efficiency and free up FTEs time to be focused directly on top-notch customer service, without increasing its costs. And you can too, if you follow Bank Z’s lead…bank on it!

Bringing a Knife to a Gun Fight | Sherpas in Blue Shirts

CEOs can say the darndest things. I’ve met with many of them over the years, and on more than one occasion their response to one of my fact-based statements has been, “Why didn’t you tell me about this earlier?” Of course! Why didn’t I think of that? The truth is, it’s far easier said than done.

A few years ago I had this same type of exchange with the CEO of a Fortune 100 company. After presenting my analysis of a specific situation with which his organization and the entire industry was grappling, I stated that I had been delivering the same message at various levels of his organization for months, to anyone who would listen – and in doing so tied it directly to the strategy and vision he presented at an analyst conference at the beginning of the year – all to no avail.

Then he said something that still amuses me: “Why didn’t you come directly to me with this? I’ve been in a knife fight and you’re selling guns.”

I respectfully explained to him that I had been trying to arrange a one-on-one meeting with him since shortly after his analyst conference presentation, and:

The CEO then acknowledged that this could be a problem, but he wasn’t sure how to fix it. I suggested that one solution would be to hire/appoint an ombudsman to vet ideas and to tell him directly of those that warranted top-level attention. I also recommended that the person be someone external to his organization to guard against political ambitions or personal agendas.

I spoke again several weeks ago with this CEO and asked whether he had tried the ombudsman suggestion. He said yes, that he had hired the individual personally, and that his executive assistant was the only person in the organization that knew of this person’s existence. He explained that the in-place guidelines are, if a salesperson/consultant had the wherewithal to attempt to go directly to the CEO, his assistant forwards the information to the ombudsman. That person evaluates the idea and, if it is of value, recommends that the CEO accept an in-person meeting. And then he swore me to secrecy.

Could this approach help your organization? Well, I guess that depends if you’re trying to fight a gun battle with a knife.