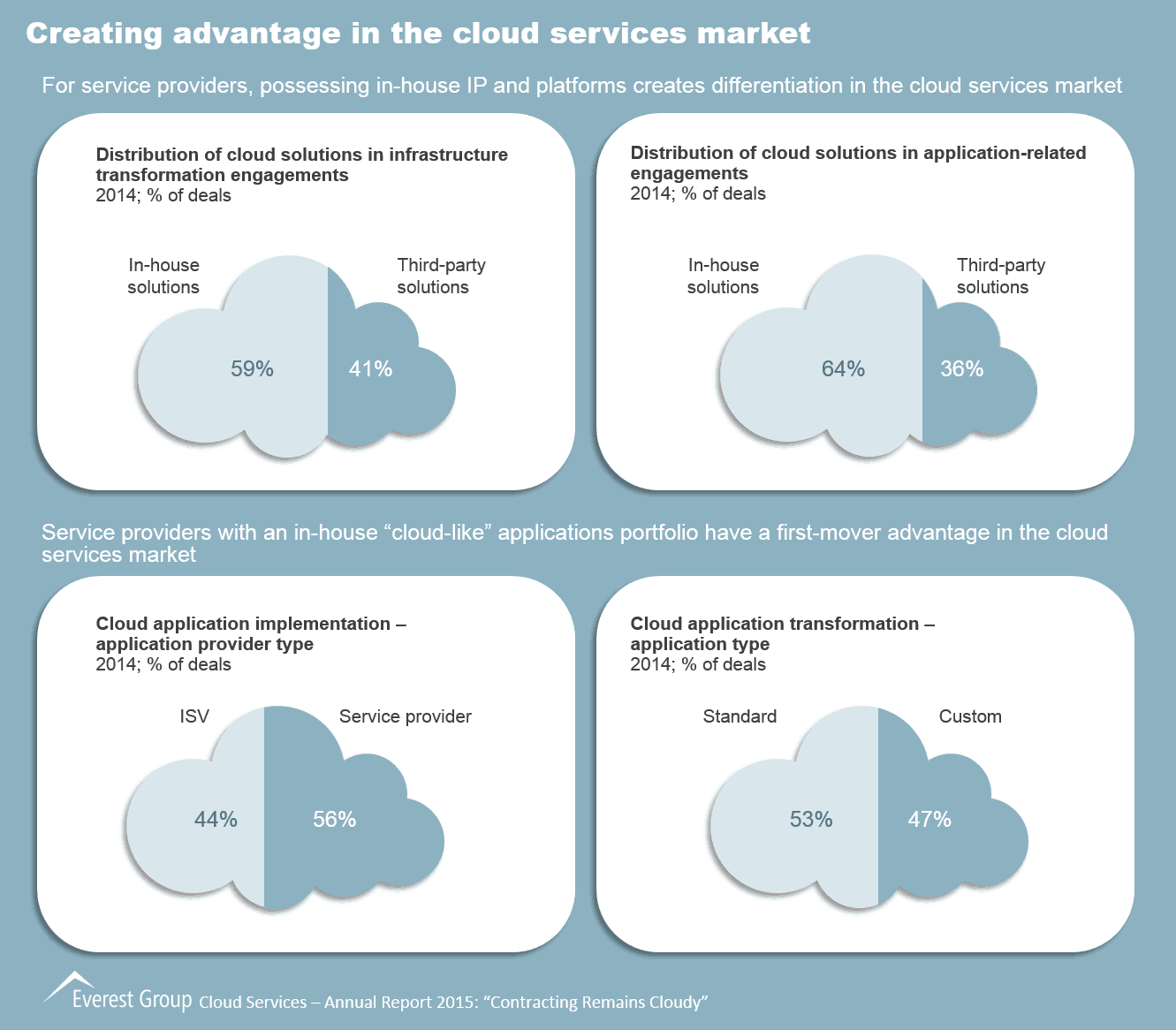 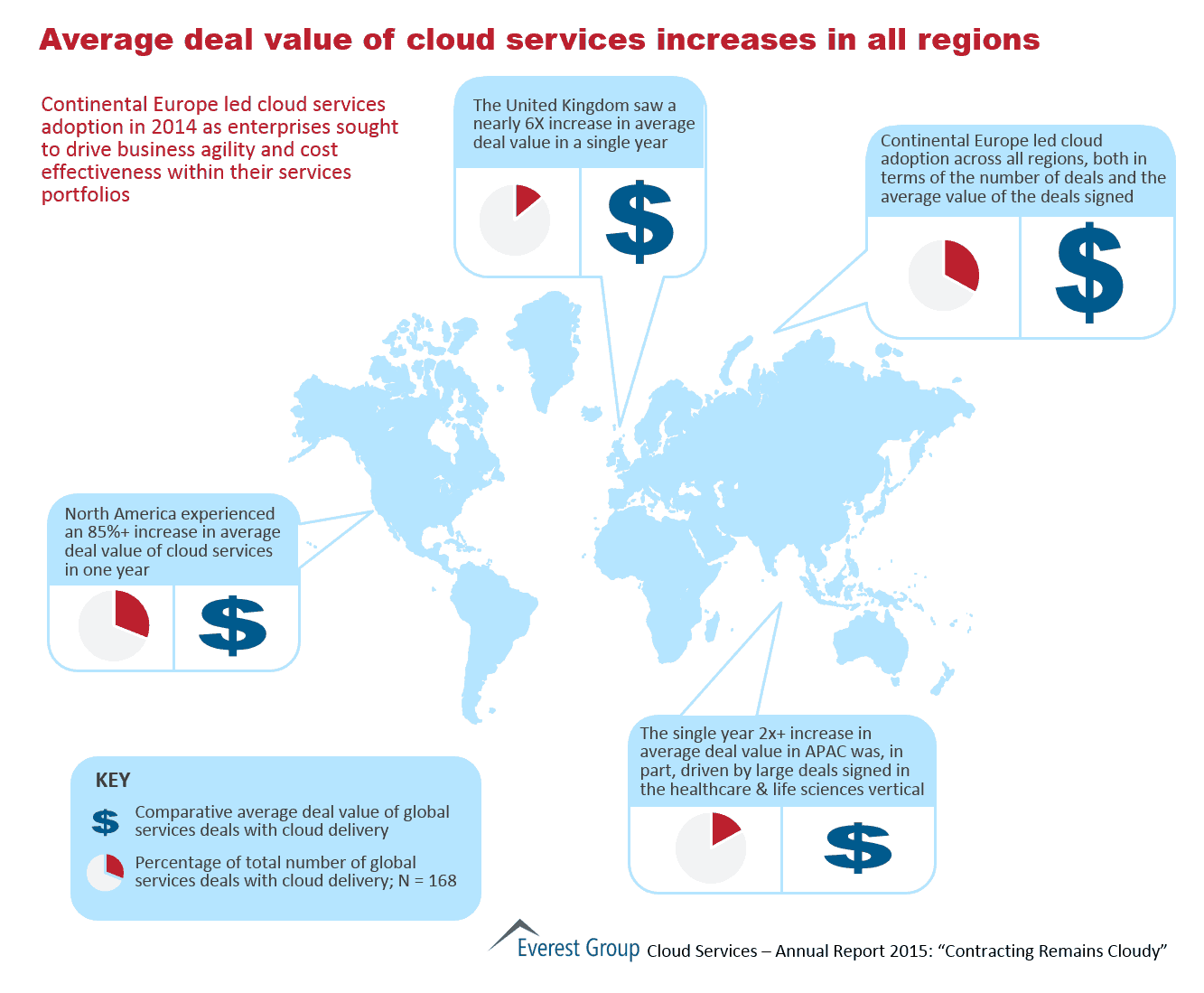 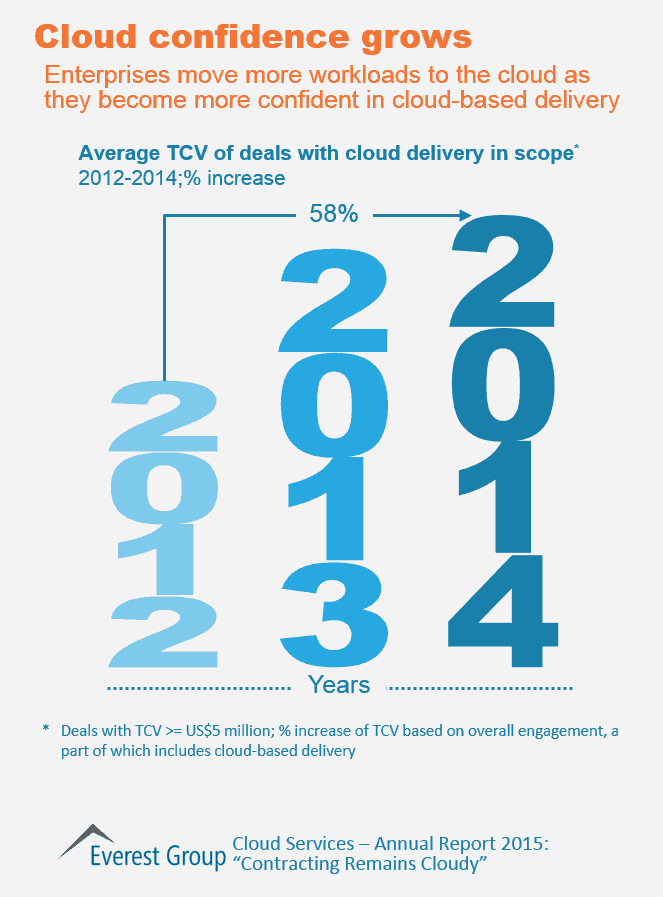 Since the beginning of 2014 Everest Group has seen a real shift in large enterprise CIO organizations in their strategic intent toward cloud services. What are the implications on the traditional infrastructure outsourcing market from this strategic intent?

First, we expect that this shift will not happen overnight. As organizations work on their cloud plans, it’s clear that this is a three-to-five-year journey for migrating some or all their environment into this next-generation environment.

Runoff of work from legacy environments

Second, we expect the runoff on traditional outsourced contracts to accelerate. The runoff has been running at about 5-10 percent a year. We expect this will pick up to something close to 50 percent of the workloads to shift over to the cloud in the next three years with 30 percent of that shift happening in the next two years.

So this is a dramatic runoff of work from legacy environments into the next-generation models. This will put significant pressure on the incumbent service providers in that space.

Who will be the likely winners?

The third implication is the likely winners from this strategic shift. We think that at least for the next two years the Indian players or those with a remote infrastructure management (RIM) model will enjoy substantial benefits. Often a move to cloud or next-generation technologies can be facilitated by a move to a RIM model. So we see RIM continuing its torrid growth.

We also believe the providers with enterprise-quality cloud offerings will be players. One that particularly comes to mind is IBM’s SoftLayer, which we think is well positioned for the shift. It has its own runoff and can grab share from asset-heavy or other legacy providers as runoff occurs there.

We expect to see Microsoft and its Azure platform play an increasingly prominent role in cloud services. It will be interesting to see if AWS, Google, and Microsoft can make the shift from serving rogue IT and business users to enterprise IT. At this time we certainly believe IBM can. And it looks like Microsoft is making deliberate efforts to transition its model. It remains to be seen if AWS and Google are willing to shift their models to better accommodate enterprise IT. 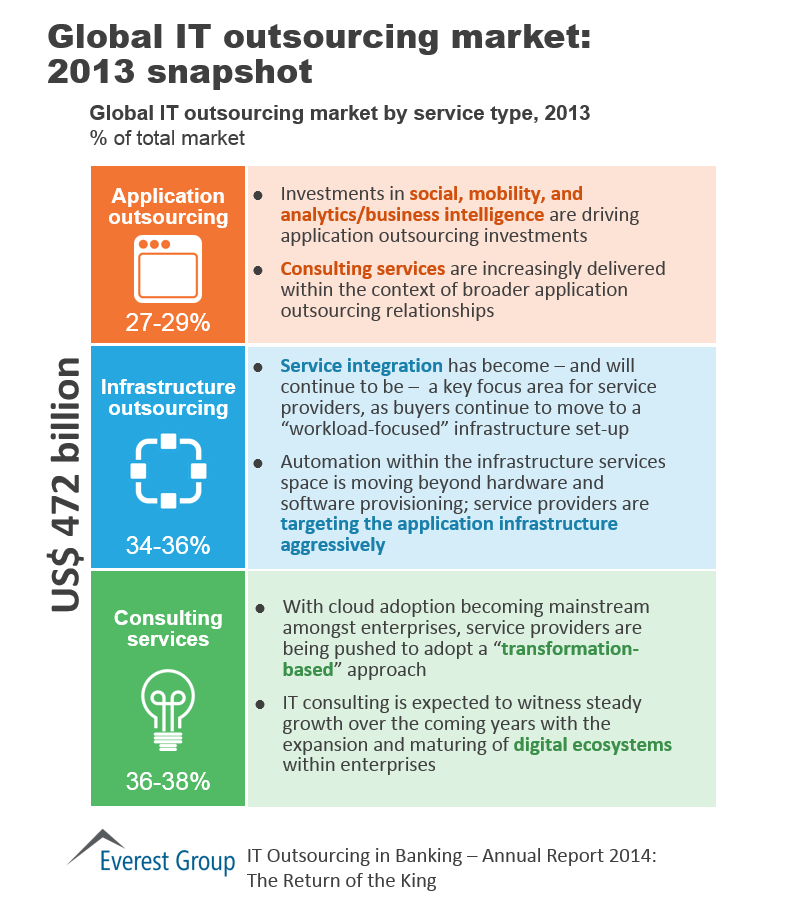 The global IT outsourcing market reached $US472 billion in 2013

Why Hasn’t Cloud Had a Bigger Disruption on the Services Industry? | Sherpas in Blue Shirts

If you read the technology news in the press and social media sites, it’s apparent that we’re in the midst of a big sea of change in which the as-a-Service and public cloud models are transforming the services industry. HP and IBM’s travails and Oracle’s slowdown are laid at the feet of the SaaS providers. But when you pile all the current cloud activity together, it amounts to a hill of beans, not a mountain. Why aren’t we seeing evidence that disruption from these models is happening on a significant scale?

In the famous words of an American hamburger TV commercial several years ago: “Where’s the beef?” Everyone is talking about big agendas to rework workload portfolios and making big efforts to to do that. Yes, Accenture has invested well over $1 billion around cloud and several Indian providers have invested $100+ million a year in mobility and cloud work. And the HCL-CSC alliance is predicated on the fact that there will be a huge cloud sandwich for which they want to position themselves.

If you give providers half a moment, they’ll wax with great eloquence and excitement about the prospects for the cloud model as a high-growth area in services. But if cloud disruption is coming to the services industry, it must be walking; it sure isn’t running.

Where are the billion-dollar practices that do cloud? Why don’t we see service providers launching entire new practices or start-ups reworking applications so they work in the cloud? Who is doing all the work?

The answer to the above questions is that disruption to service providers is happening occasionally but not en mass.

It reminds me of a conversation I overheard around the impending revolution about self-driving cars. Supposedly a Google executive was saying that it’s not likely that new self-driving car will come on the market and people will buy them when they arrive. Instead, he believes the more likely scenario is that we’ll find ourselves using cars that park themselves and then over time become incrementally more capable and eventually driving themselves. But we won’t have gone through that aha moment where we went out to buy a self-driving car.

I think the same thing is happening with cloud disruption. There just doesn’t seem to be a lot of evidence that companies are driving huge transformations to the cloud right now. Maybe it’s a timing issue in which CIOs and large enterprises will become comfortable enough with the technology that they’ll move en mass to rework their ecosystems to embrace this model. But maybe they won’t embrace it like this and, instead, the industry will wake up one day and find that we’ve incrementally adopted SaaS, public cloud and private cloud.

Perhaps the tide bringing cloud disruption is coming in slowly rather than in as a tsunami. What do you think?

Will Cloud Kill The CIO? Survey Says No | Gaining Altitude in the Cloud

Sometimes it’s hard to distinguish the facts from hype in enterprise cloud adoption. This is why Everest Group and Cloud Connect continue to conduct our annual joint survey to understand why and how enterprises are migrating to the cloud, and what they are migrating to the cloud. Check out my blog on InformationWeek for more findings on the Enterprise Cloud Adoption Survey. Here’s an excerpt:

If supermarket tabloids covered enterprise cloud adoption, their headlines would scream “The CIO is Dead,” “Security Concerns are Old News,” and “Cloud Makes Consumption Easy—No External Help Required.” And as we perused these headlines in the checkout line, we would wonder how much truth lay behind the hype.

To distill fact from fiction, the Everest Group launched the Enterprise Cloud Adoption Survey in 2012, in conjunction with Cloud Connect and UBM TechWeb. We have just completed the third annual survey of enterprises and vendors and will share the results in Las Vegas on Monday, March 31, at Cloud Connect Summit, co-located with Interop.

You can also download the full survey summary report here. 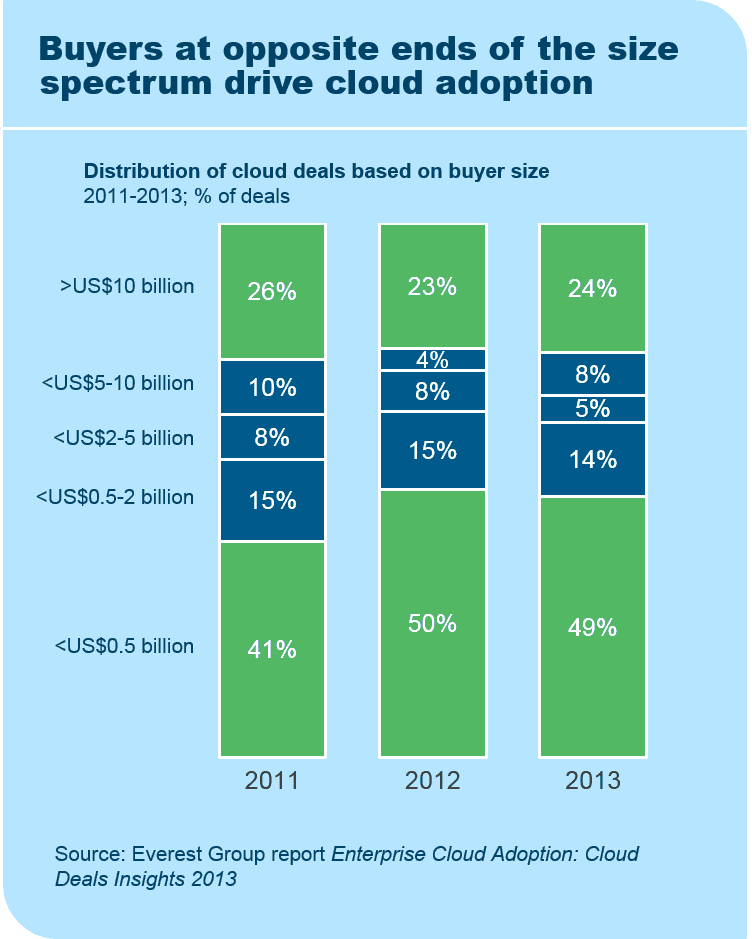 Though adoption drivers vary for small and large buyers today, they will converge as cloud offerings become more pervasive and stable. This convergence will create multiple opportunities for cloud service providers.

Last fall I had the honor of sitting on the selection committee for the inaugural ICE (Innovation in Cloud for Enterprise) Awards, sponsored by the Cloud Connect show and Everest Group. The experience taught me how large enterprises are adopting cloud computing in ways that are often compelling, sometimes surprising, and occasionally breathtaking.

The winner, Revlon, Inc., presented an impressive case for how it leverages cloud to achieve organizational transformation that boosts competitiveness and consumer wallet share.

As impressive as each individual entries was, there were five recurring themes that emerged across the enterprise cloud adoption stories we read. While certainly not scientific, they reflect what enterprises themselves report as important factors in the success of their cloud deployments.

1. Identify a compelling reason to step out of the comfort zone.
We’ve read about the importance of senior management buy-in to achieve success in cloud transformation. But what we found in the award entry submissions is that the truth is even starker: Senior management must believe that cloud adoption is critical to organizational survival.

The high-level driver might be one of the ethereal themes we read about in the tech press: Product or service differentiation, moving to market faster with new services, or getting closer to the customer through big data analysis. However, the visceral driver is always primal: We do this or we’re going to suffer at the hands of our competitors. 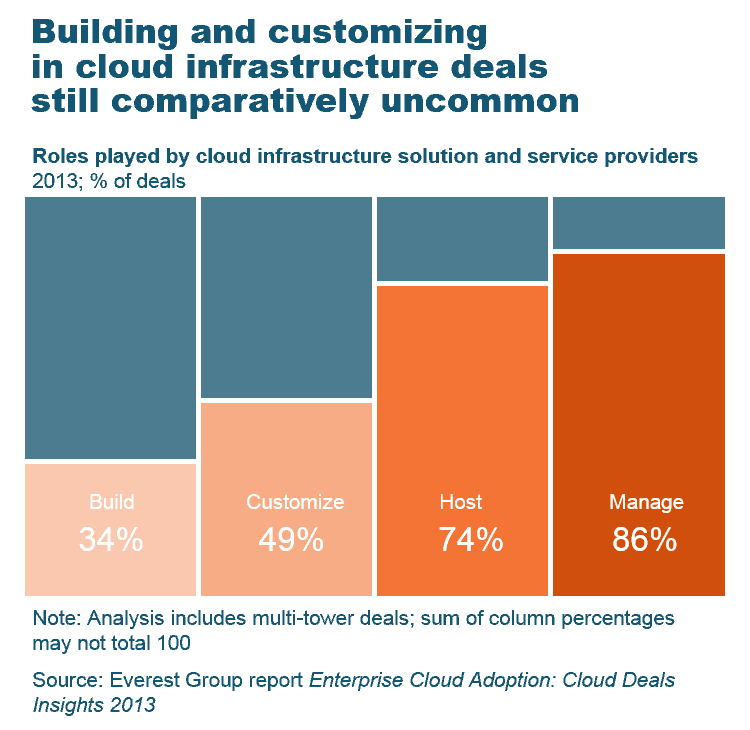