First, there was shock. Then there was disappointment, then anger. Quickly, it all turned to blame.
Amazon said it will not reopen its beauty contest, but it is not clear what city would get the other half of HQ2, or if Amazon will just hire fewer workers in the future. What is certain is that New York City’s reaction to the incentive package will reshape how deals like this work in the future.

Tech consulting firm Everest Group managing partner Eric Simonson agreed it will be a wake-up call for bigger companies. “Pro-business regions with large labor forces — often associated with the South, such as Atlanta, Dallas, Houston and Phoenix — are likely to use this to their advantage,” he said.

Unique, bold, unprecedented…those are just some of the words that describe Amazon’s announcement to establish a second headquarters in North America, with an end-state over the course of 10-15 years of 50,000 employees with an average salary exceeding $100,000.

The intent is exciting, both for potential employees and the cities that Amazon identified as location contenders. But is Amazon’s strategy viable? We believe it’s realistic to the extent that Amazon can keep its mojo going over such a long period of time.

For Amazon to be able to amass 50,000 employees in 15 years, it will need to add 3,000 to 5,000 employees per year. These employees will have to be a mix of recent college grads and mid-management-level workers. So Amazon will have to take into account how many local universities and businesses there are in the selected location and the city’s relocation attractiveness.

This is all about what Amazon intends HQ2’s business concentration to be. For example, will it have a retail focus like its Seattle headquarters? Does it intend to grow its advertising business in its new location? Will its focus be on the government sector, shipping/transportation/ logistics, or Latin American market growth? Whatever its intent, the new location will have to be a hot-bed of activity.

If Amazon wants its second headquarters to help lead its international growth or manage suppliers based in Europe or Asia, the time zone overlaps of a location in the eastern or central U.S. time zone will be a huge business advantage.

This relates to how easy it is to get to other geographical markets of interest. For example, if Europe is a target, a site in the northeast or central U.S. makes sense. But if Mexico, Central America, and Latin America are on the radar screen, a major city in the southeastern U.S. would be a good option.

Of these four, the biggest issue and most important consideration is: can Amazon get the volume and quality of talent it needs to fulfill its HQ2 vision? As we said above, the company will need to add up to 5,000 employees each year to get to 50,000 strong in 15 years. That’s a massive hiring agenda. For comparison purposes, when we’ve worked with other leading brand name organizations that are scaling new IT shops, they’ve typically been able to hire 200-350 people per year.

Can Amazon do it, or might it ultimately revert to a hubbed model, first establishing HQ2, and several years later HQ2.5? Only time will tell.

Although Amazon recently winnowed its options down to 20 cities, we think only six of those are truly viable. Here, in alphabetical order, is a quick look at our short list:

Atlanta is a diverse economy, with UPS and Delta-driven strength in shipping and transportation, and Home Depot in retail. There’s a lot of impressive university talent available, in Georgia as well as the neighboring states of Alabama, Florida, and South Carolina

Boston is a great education center, and is known for large, corporate innovation. It would be a wonderful place for Amazon to build on what its been doing with Siri there, and to continue its growth in the high tech space. It’s also an airline hub with comparatively short flights to Europe.

Chicago is strong in the consumer and retail industries, and that obviously overlaps nicely with Amazon. It also has good connectivity to Europe, Seattle, and, to a reasonable extent, Asia.

Dallas has a good history of relocating companies’ operations and a strong tech talent pool and ability to pull talent in from universities in the region. One unique aspect in favor of Dallas is Amazon’s AWS business. As that matures, we expect it will need to increase the sophistication of how it sells to enterprises. And because Dallas is considered the original home of outsourcing enterprise IT services in North America, Amazon could find a lot of sales, marketing, and other talent in the area that wouldn’t be as common in the other cities.

New York City is by far the largest labor market, and Amazon could attract a lot of talent. If the company is trying to really increase its advertising business, the Big Apple would be a good choice. And because of the city’s diversity, Amazon wouldn’t be too limited in any one direction.

Washington, D.C. has a fairly large labor pool with a lot of high tech, much of it government-oriented, which may be both a pro and a con, depending upon Amazon’s mission. It’s well connected internationally, and is a fairly interesting place to try to establish a large corporate.

To learn more about our take on the viability of Amazon’s HQ2 strategy, please read our viewpoint, and listen to a discussion I recently had Ryan Takeo, host of KING-TV’s The Sound Podcast, called, “Talent, not incentives, most important in HQ2 search.”

An even shorter Amazon HQ2 short list | In the News

On KING 5’s The Sound Podcast, Simonson said he believes Amazon’s decision will come down to scalability of talent, business mix, time zone, and physical proximity.

Read more and listen to the podcast on K5 News

Amazon’s HQ2 bidding process has advanced to a shortlist of 20 locations.

That narrowing field has some questioning how feasible creating a 50,000-person office from scratch will be for smaller contenders not known for their tech base.

“When this first came out, our reaction was: ‘Holy cow. That’s big, and it’s quick. Can they do it?’” Everest Group Managing Partner Eric Simonson said.

Amazon’s aggressive HQ2 building plans, coupled with its desire to hire 50,000 employees, would be a difficult task for any city to fulfill, Simonson said — but particularly those smaller markets like Columbus, Ohio; Raleigh, North Carolina; Nashville, Tennessee; and Indianapolis. An Everest Group report on HQ2 bidders said Amazon is going to struggle with filling seats if it considers regions with populations of less than 4 million people.

‘Business Report’ publisher: Metro Council gets high on Amazon HQ2 and search for new airport director | In the News

Did someone bring “special brownies” with an extra ingredient to the Oct. 11 Metro Council meeting when the council passed a resolution urging Amazon to consider East Baton Rouge for its new HQ2, which would bring a $5 billion investment and 50,000 jobs? The resolution said EBR “has a stable and business-friendly environment, has urban and suburban locations with the potential to attract and retain strong technical talent, and is a [community] that thinks big and creatively when considering locations and real estate options.” Huh?

An Irish gambling site and business analysts both list Atlanta as a top city to land Amazon’s second headquarters.

Everest Group, a management consultant company, listed Atlanta as one of five cities that could support HQ2.

Two hundred thirty-eight cities and regions in North America have submitted proposals to Amazon to become the location of the company’s second headquarters. It was an overwhelming response to Amazon’s announcement last month that they were looking to build a second headquarters, to be called Amazon HQ2, to supplement their current Seattle location. The 238 proposals came from 54 states, several Canadian provinces, and three cities in Mexico.

Fortune consulted Everest Group, a Dallas research firm, which predicted that the city selected will need to have a population of at least four million. Their top candidates are Atlanta, Boston, Chicago, Dallas, New York, and Washington D.C. 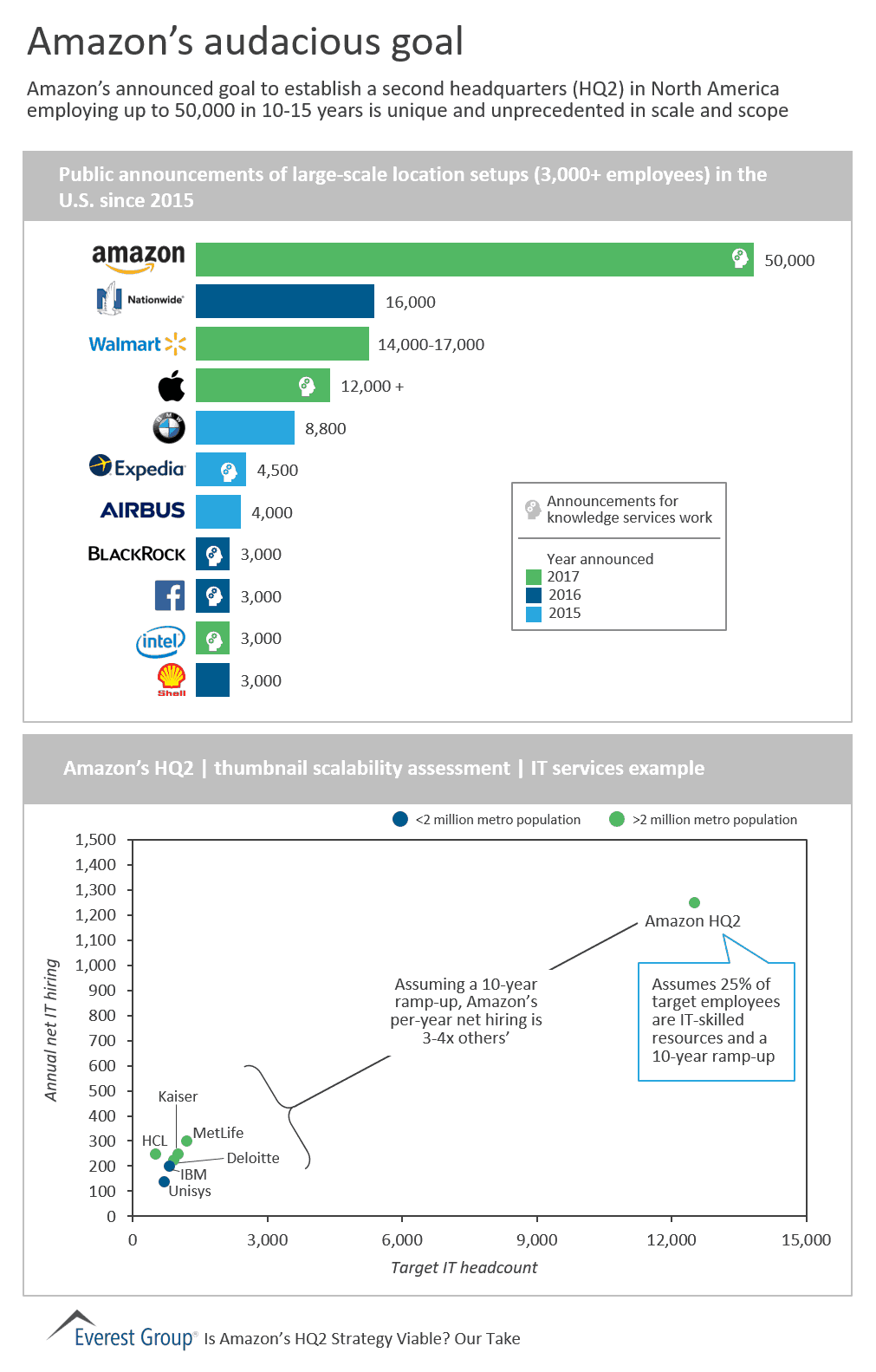 Amazon’s announced goal to establish a second headquarters (HQ2) in North America employing up to 50,000 in 10-15 years is unique and unprecedented in scale and scope

Etiquette police, aside, the truth is Kansas City doesn’t appear to be a front-runner for the gig, according to research from firms like Moody and Everest Group—which have put out lists citing New York, Atlanta, Boston, Dallas, Washington D.C. and Chicago as more likely candidates, based on the size of the skilled labor base Amazon is anticipating.

The deadline for cities to apply to become Amazon’s second headquarters (or HQ2) is Thursday. While proposals have come from all over the map, it is unlikely that any metro area with fewer than 4 million people will make the grade, according to Everest Group, a Dallas-based consulting and research firm.

Only cities of that size are likely to have the both the basic infrastructure and base of skilled employees to supply Amazon’s needs. Amazon (AMZN, -1.99%) has said the new location could eventually employ 50,000 skilled people with average annual salaries of more than $100,000. These are not blue-collar jobs, and filling skilled jobs in these numbers is not easy, Eric Simonson, managing partner of Everest’s research group, told Fortune.

Given that, Atlanta, Boston, Chicago, Dallas, New York, and Washington D.C. will likely be Amazon’s top candidates, according to Everest.