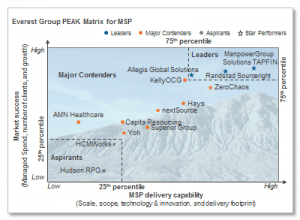 I recently went to dinner with a CIO who talked about having two major service providers in his company’s portfolio – an Indian provider and Accenture. He told me he uses both providers aggressively. We were talking about the fact that both providers have similar rate cards, large numbers of offshore workers, and they both come to him with an unending set of transformational ideas. I asked him how he chooses between the two.

He added that he’s not sure it’s possible for either provider to become the other. He explained that when he asks Accenture to operate from a keyboard mentality, they fight him for the steering wheel. They want to lead and want to drive the transformation. Alternatively, when he asks the Indian provider to lead, they defer to his management team and do as they’re told.

So he says he came to accept that both behaviors are effective. He needs each at different times, so he should not ask one to be the other. Both are valuable assets.

Services clients should keep this CIO’s perspective in mind. There are whiteboard opportunities and there are keyboard opportunities. If you ask providers to be something they’re not, you’ll get a frustrated response. Choose carefully.