“Putting Canadians First” — the title on the document explaining changes to the nation’s Temporary Foreign Worker Program —makes the Canadian government’s intent clear. Canada is forging ahead with adjustment to its immigration policy. The result will increase costs for global service providers in two important dimensions.

At this point, it’s now very unlikely that meaningful immigration reform will happen for the next two years in the United States. But Canada is moving forward, and components of its reform will make it much more difficult for service providers to utilize temporary foreign workers.

Canada’s immigration reform will increase the cost of transitioning new work to the global services model, particularly for India-based firms.

Neither of these two factors will stop the process of sending temporary foreign workers into Canada. However, it will slow down the process and also be more expensive for service providers than their current structure.

The “Putting Canadians First” reform of the Temporary Foreign Workers Program will not stop the Indian service providers from competing effectively in the Canadian marketplace. But it will complicate their business and modestly raise their costs to compete in Canada.

We do not believe that these changes will materially affect the multinational service providers such as CGI, HP or IBM. They already have substantial presence in Canada and have large existing workforces there. In fact, the net result is that the Canadian-based multinationals’ competitive posture will be slightly improved due to these immigration changes.

LATAM GAO: Competitive for Some, Not so for Others | Market Insights™ 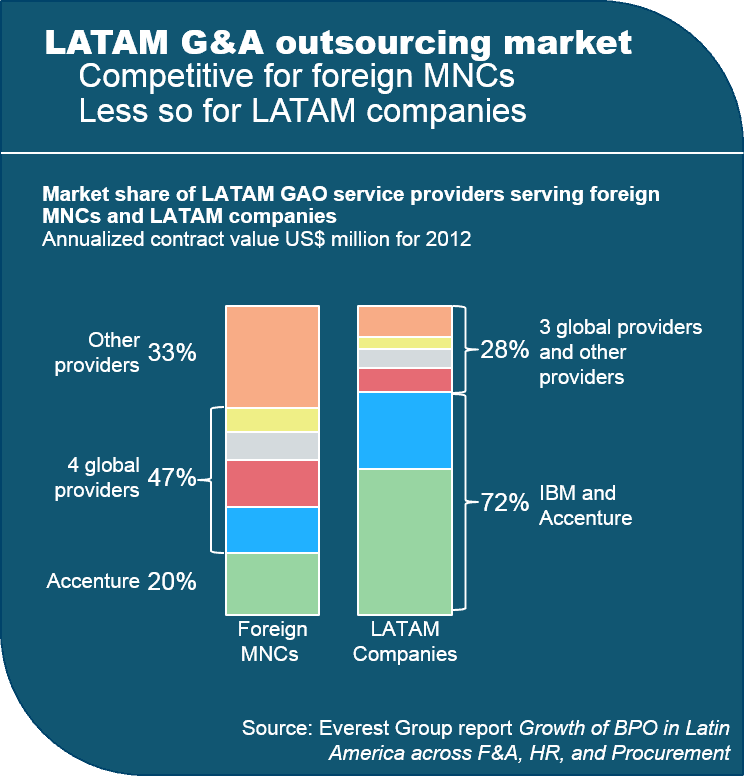 On the other hand, IBM and Accenture dominate the LATAM GAO market for LATAM companies, with a combined market share of more than 70%.