From time to time we get to witness the death of a market. This is seldom pretty, as many are affected with pain and denial. In extremely rare cases an enterprise arises from the ashes of a market implosion, reincarnated with new products and services, a renewed vision, and bright growth prospects. But most often, a string of failures is apparent: some go down spectacularly as they miss the warning signs and skid off the edge of a cliff; some suffer a slow and painful end, dragging along those who dedicated much to the firm, but failed to overcome denial of the changes needed as they dream of the good old days; and some commit suicide, refusing to grapple with fundamental truths as they meet their demise.

For those of you who have an eye for the macabre and are interested in witnessing such a spectacle, we suggest you pay close attention to the legacy IT infrastructure outsourcing (IO) market over the next few years. As illustrated in the chart below, the legacy IO market has been migrating through a maturity cycle, moving from slow growth to flat or stagnant growth and now has large segments that appear to be contracting. 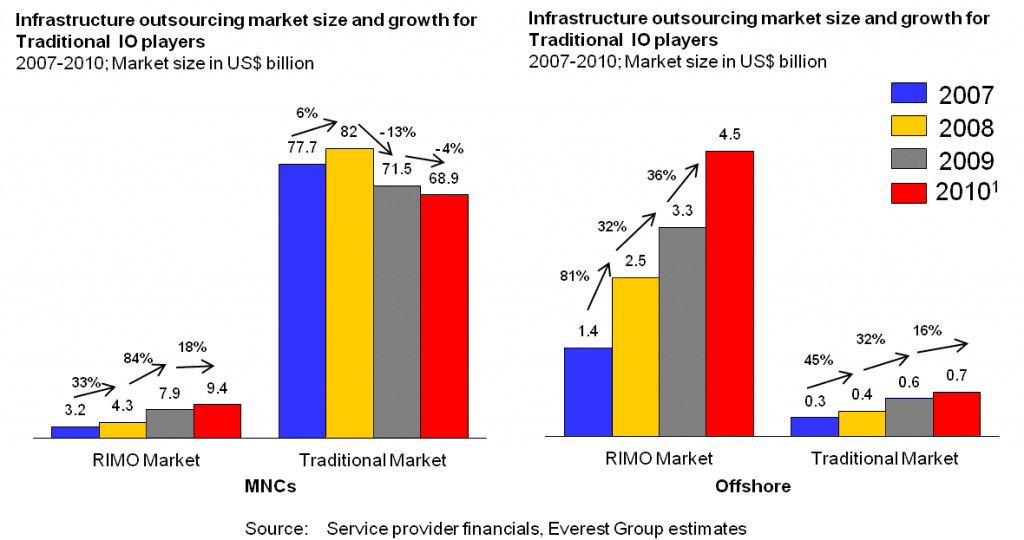 The IO market is primarily built on large contracts, often over $100,000,000 in size, with durations of three to 10 years. Many of these contracts include substantial capital for assets such as servers, data centers, networks, and capitalized transformational costs. These contracts are notoriously inflexible, driven by a combination of factors including the need to predefine service level agreements (SLAs) and scope over a long period of time, pricing that has to anticipate changes in volume and technology, and the substantial capital cost that must be retired over the life of the contract. As you can see from the chart below, these contracts delay the profits to the service provider, and only deliver modest profitability late in the contract term. 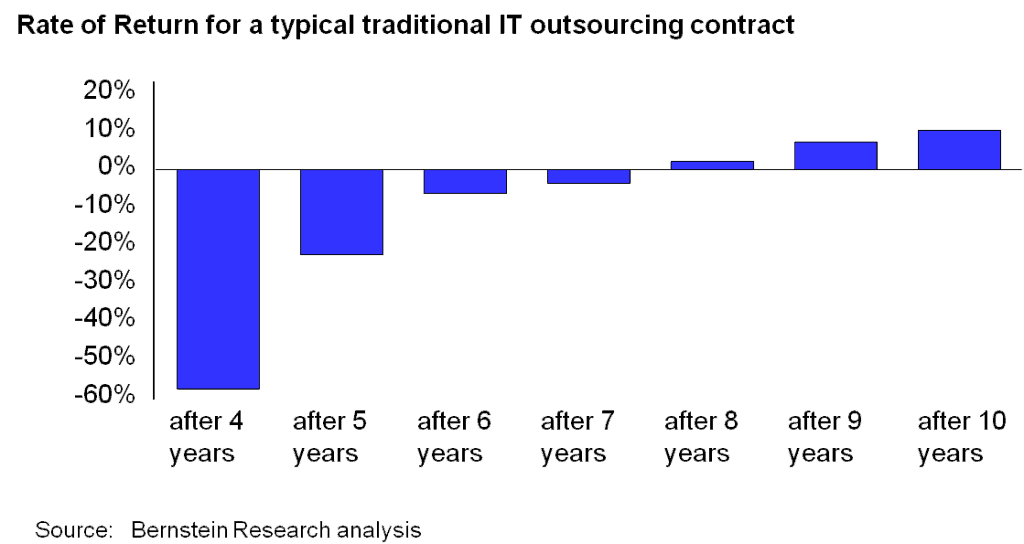 The combination of unrealized earnings and undepreciated assets has the potential to create substantial stranded costs if the contracts are terminated early or significantly renegotiated midterm. These stranded costs have been the bane of the industry, creating a steady stream of blow-up deals – some of which consistently further suppress earnings in the sector.

Sometimes a decision to transfer assets to a service provider was driven by an artificial increase in return on capital that the buyer would show after assets were moved from its books to those of a provider. Nonetheless, even this benefit eventually disappeared due to changes in assets accounting in an outsourcing transaction (see Everest Group’s Research report “Show Me The Assets! The Changing Role of Asset Ownership in Infrastructure Outsourcing”)

The patient starts to look anemic

Over the last few years, customers have been increasingly turning away from these long-term IO transactions. Most current market activity involves only those already committed to these contracts – and only then renewing their arrangements because of the substantial difficulties associated with bringing processing back in-house once the talent and data centers have been transferred to a third party. In many cases, these organizations have opted to descope their contracts and/or actively seek alternative delivery vehicles. To this point, the industry has been able to cope with these negative secular trends through consolidation, cost cutting and restructuring. One need only look so far as the acquisition of EDS by HP, and the ongoing struggles at CSC, to confirm this truth.

The growth of remote infrastructure management outsourcing (RIMO), co-location services and, most recently, cloud computing, provide the market with less expensive and far more flexible alternatives. When combined, these transformational offerings present the IO market with a compelling rationale and clear migration path to move quickly from the legacy IO model. Everest Group’s analysis of the economic justification for wide scale industry adoption points to significant acceleration of existing IO customers’ movement away from their traditional models by breaking contracts, non-renewal or substantial descoping. We have been tracking the dynamics of this departure from traditional IO for some time. See our research on this and other IT-related topics.

The picture we’ve painted above depicts a mortally ill market whose heart has failed but is being kept on life support. Yet massive organ failure is imminent, and will set off a cascading sequence of events. Consider a scenario that might play out as follows:

The final breath is snuffed out as legacy outsourcers find it increasingly difficult to cross-sell other services as frustration mounts in the IO customer base due to actions taken to safeguard their stranded investments and prolong the inevitable.

While the timing element of the prognosis is still a bit uncertain, the wolves are at the door, the doctor has left the room, and the hearse is on its way.