CSC announced it is splitting into two companies. One will provide service to commercial and government organizations worldwide; the other will serve the U.S. public sector businesses. What are the implications for the services industry?

CEO Mike Lawrie has been running CSC’s turnaround. The story line he drove was that he would first drive earnings and then fix growth. He has been spectacularly successful in driving earnings, but the pivot to growth hasn’t worked so well.

Certainly there were rumors that CSC was up for sale, but it didn’t transpire. We believe this split into two entities is the natural next step, especially since it comes at a time when the industry is maturing. The separation allows CSC to behave differently.

Everest Group believes the federal component will become an attractive acquisition target with both defense contractors and private equities interested in the consistent cash flow and book of business.

The commercial side may also attract interest, but from a different group. Certainly there has long been speculation that one or more Indian-based service providers may have an interest in acquiring CSC’s infrastructure-based business. It would be a large acquisition with substantial adjustments as the Indians move the book of business to their labor arbitrage model.

For both of the new entities, whether they are acquired or remain independent, the split should allow them to focus more strongly on growth at time when growth is coming at a premium.

As to the implications for the industry, we see this split as playing into the industry’s ongoing story of maturing and playing also into the theme of industry consolidation and industry realignment.

Which Service Provider Will Be Acquired Next? | Sherpas in Blue Shirts

Capgemini’s announcement that they have an agreement to acquire iGate is the most recent evidence that the consolidation pace in the services market is picking up. Slowing growth, collapsing margins, and availability of capital with interest rates close to zero are only intensifying the M&A activity. How will the consolidation happen? And which service provider will be acquired next?

At Everest Group, we believe there are three likely scenarios that answer these questions.

One of the most interesting scenarios to watch will be what happens with Genpact. They must take a “go big or go home” strategy. If they go big and become acquisitive, they will likely buy one or more IT firms. Short of that, Genpact isn’t too big to be sold and will become a highly attractive candidate for acquisition.

Today, Capgemini announced the merger agreement to acquire IGATE for $4.04 billion. IGATE is a US-listed technology and services company headquartered in New Jersey with US$1.27 billion in revenue in 2014. The sale of IGATE has been in the offing for a while after private equity company, Apax Partners, which financed most of IGATE’s US$1.2 billion acquisition of Patni Computer Systems in 2011, converted its debt into equity in November 2014 (becoming its largest shareholder) and also filed with the U.S. Securities and Exchange Commission to have the option to sell its stake. The combined group will have nearly US$13 billion in annual revenue and 177,000 people globally. Capgemini aims to realize revenue synergies of US$100-150 million (through cross-selling and account farming) and cost savings of US$75-105 million over the next three years. The deal’s size and cross-ranging implications make it one of the most significant transactions in the IT-BPO industry. Capgemini is paying a premium for its North American ambitions, over 3x revenue multiple. It outstrips other such deals in the marketplace, notable CGI-Logica (2012) and IGATE-Patni (2011), indicative of the scale and urgent imperative driving deal rationale.

Major acquisitions in the IT-BPO market (US$ million) 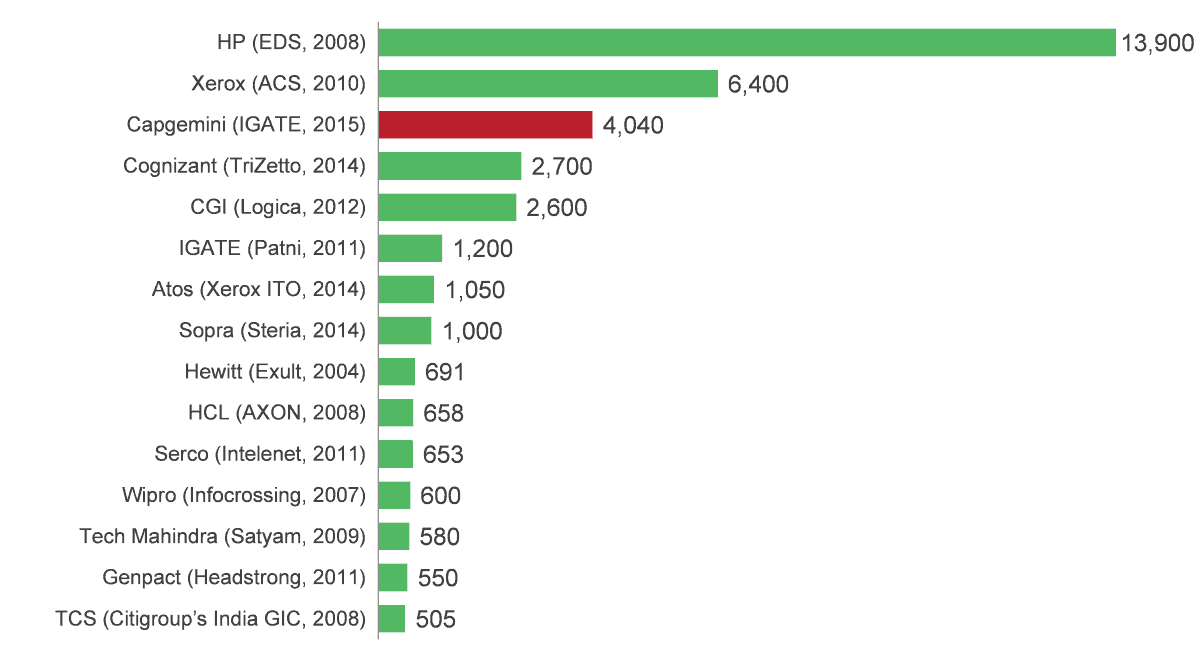 Prima facie it gives Capgemini a sizable foothold in the North American market, the biggest IT outsourcing market in the world. North America becomes a significant market for the combined entity, comprising nearly one-third of 2015 projected revenue, up from 20% for Capgemini earlier. Europe will still account for over half of the combined revenue. The North American region contributed nearly 80% to IGATE’s revenue in 2014, with marque clients such as GE and Royal Bank of Canada. This had increasingly become important for the company since its French-rival Atos bought Xerox’s North American ITO business late last year. That deal also made Atos the primary IT services provider to Xerox (~US$240 million annual revenue) and also have the right to first refusal on collaborative opportunities with Xerox.

It enhances Capgemini’s delivery presence in offshore/low-cost regions specifically India, where most of IGATE’s 33,000-strong workforce is based. Capgemini had earlier acquired Kanbay in 2006 with a focus on increasing India operations. It also bought Unilever’s India GIC – Unilever India Shared Services Ltd (UISSL) – in parts over 2006-2010. Around two-fifths of Capgemini’s global workforce of 144,000 employees is based in India, with the combined group having an offshore leverage of nearly 55% by the end of 2015, comprising over 90,000 people.

Capgemini’s functional spread stands to gain on account of IGATE’s mixture of IT and BPO services. Specifically, Capgemini has been looking to grow its ADM and BPO business, as enterprise clients exhibit a preference for integrated services stacks led by an expanding As-A-Service economy, combine infrastructure, application, and business process service needs. This is the driving force behind IGATE’s business model – ITOPS or Integrated Technology and Operations, which will help Capgemini position itself as a fully integrated service provider. The deal also holds Capgemini in good stead, bolstering its industrialization play. As the value proposition in the global services space moves beyond labor arbitrage, service providers are looking at non-linear IP-driven revenue sources through products, platforms, and solutions. IGATE has monetized the ITOPS value proposition through productized applications and platforms – IDMS (for BFS), IBAS (for TPA clients), and SIB (for retail customers) – which are distinct P&L-plays for the company. Capgemini is also likely to receive additional tax benefits from the deal, as it is carrying a large deferred tax asset in the U.S.

The adage “culture eats strategy for breakfast” couldn’t be truer for this merger. There is a stark cultural tension with a Europe-heritage firm struggling with offshoring trying to integrate an Indian IT service provider with a strong North American client roster. Plus all is not rosy with IGATE. One of its largest clients, Royal Bank of Canada, has been facing problems for its use of IGATE services while GE’s contribution to revenue has been falling. CEO Ashok Vemuri’s hire-for-growth plan witnessed a bump when Q4 2014 headcount actually fell by about 900 employees. IGATE registered an annual revenue growth of just 10% to $1.27 billion in 2014, lagging other IT peers. On the executive front, the merger means uncertainty for Ashok Vemuri, who left Infosys specifically to take over as CEO after Phaneesh Murthy left. His dream of staying a CEO might be curtailed, and he will be tempted to move on, as he wouldn’t want to occupy a role similar to what he held at Infosys, with even less leverage with the leadership. This potential void in leadership could pose a major hurdle for the integration process.

The move is indeed a bold one by Capgemini to catalyze growth, plug delivery/regional/vertical gaps, and streamline operations. IGATE is the right size for Capgemini to absorb – not too small so it does not have a tangible impact but not so big that to create an integration struggle. The sizable deal size could spur U.S. giants to action. Given Capgemini’s European legacy, other regional service providers could mull their options in a bid to expand their operational footprint. We have already seen recent activity in Europe with the Steria-Sopra merger last year. MNCs struggling for growth and looking at globalizing delivery could start thinking of mid-sized players as possible targets. Some of these players have growth issues, significant PE investments, scaling problems – all of which make a good rationale for a merger with a bigger player. On the other hand, the deal lacks some specific attributes when it comes to next-generation technology tenets such as cognitive computing, automation, digital, and analytics. Moreover, Capgemini will need to bridge the inherent disconnect between two different cultures, systems, processes, and people, to make this integration successful. The deal is certain to spark further consolidation and conversations, as service providers witness pricing pressures, evolving engagement models, and increasing anti-incumbency, in a bid to adapt to the As-A-Service construct.

I’ve blogged before about consolidation in the services industry, and I believe the industry is now on the cusp of a new round of significant acquisitions. But don’t expect a repeat of the usual M&A strategy. We’ll see a shift from the usual tuck-in acquisition strategy to billion-dollar-capability acquisitions. At this game-changing level, consolidation could have an immense impact on the industry.

Market conditions are ripe for consolidation: a maturing marketplace, the cost of capital is very low and there is a changing perspective in executive ranks toward major acquisitions. As a result, the number of highly acquisitive players has jumped dramatically.

Cognizant led the way with its TriZetto acquisition, which changed the game in terms of size. ATOS acquired the infrastructure arm of Xerox. At Everest Group we also see Capgemini, Fujitsu, Genpact, NTT Data and Wipro as highly acquisitive players. And we wouldn’t be surprised to find others driving consolidation.

It will be interesting to see who these companies acquire – and whether they will acquire each other.