Tag: Business Process as a Service

Is Business-Process-as-a-Service Right for Your Organization? | Market Insights™ 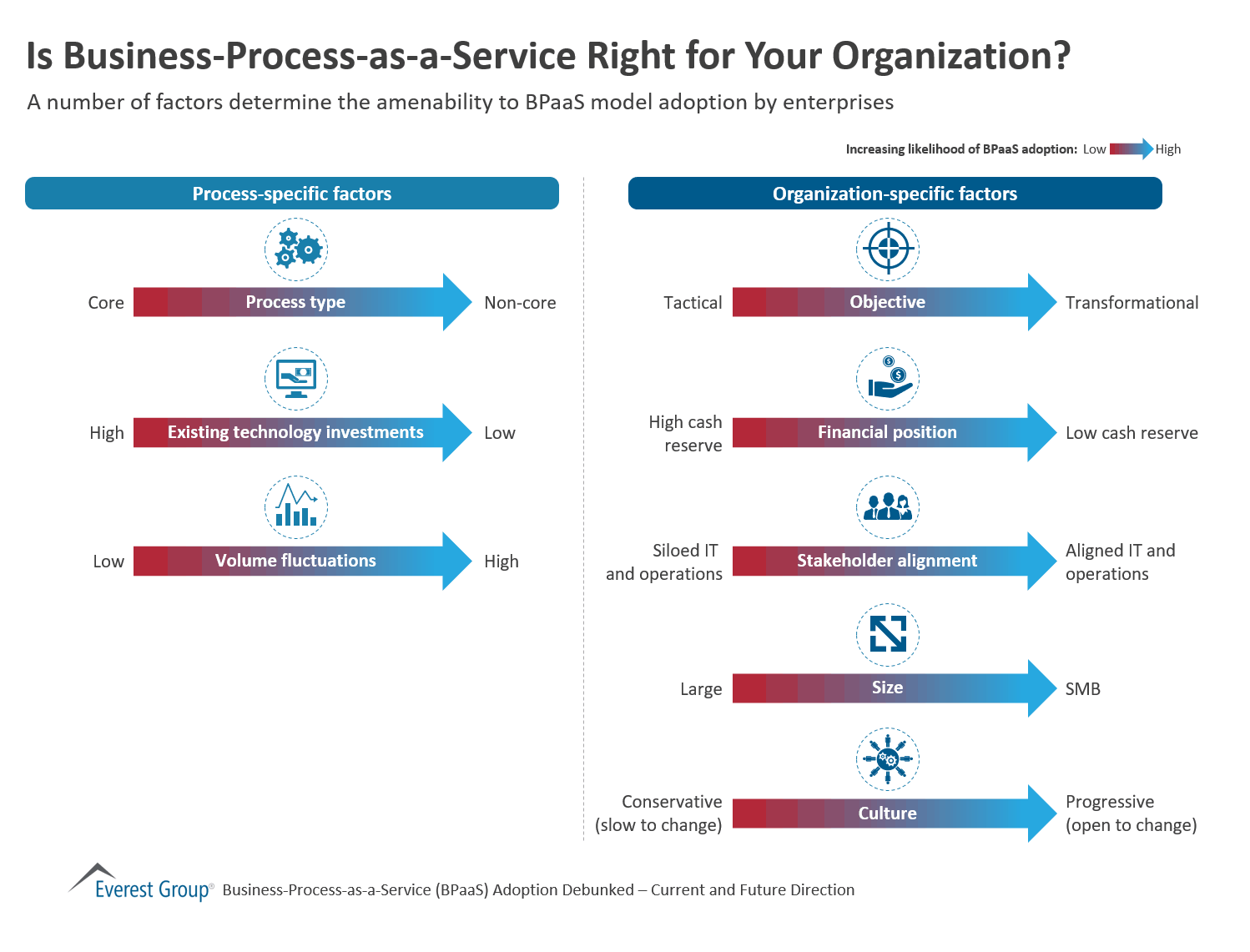 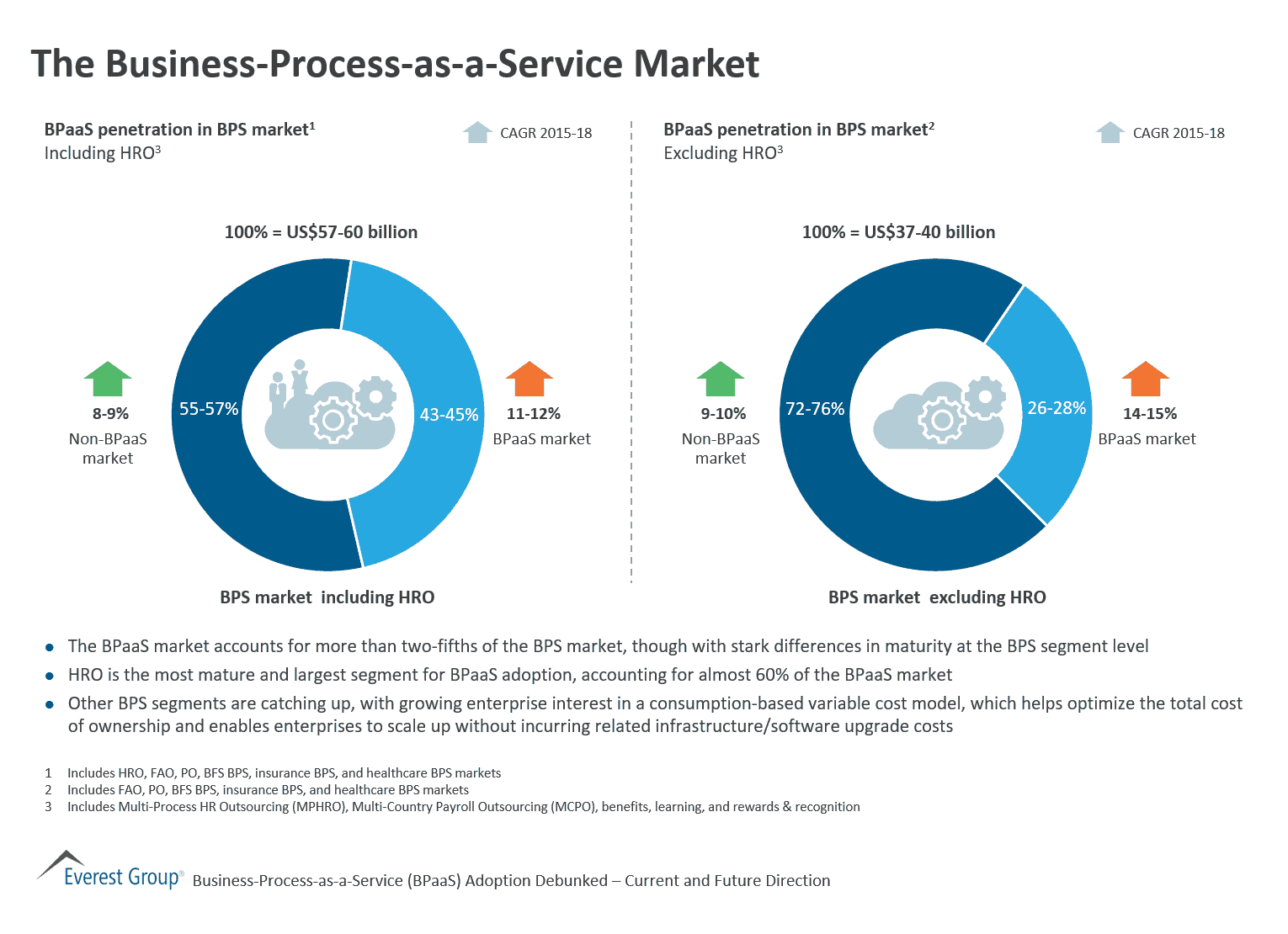 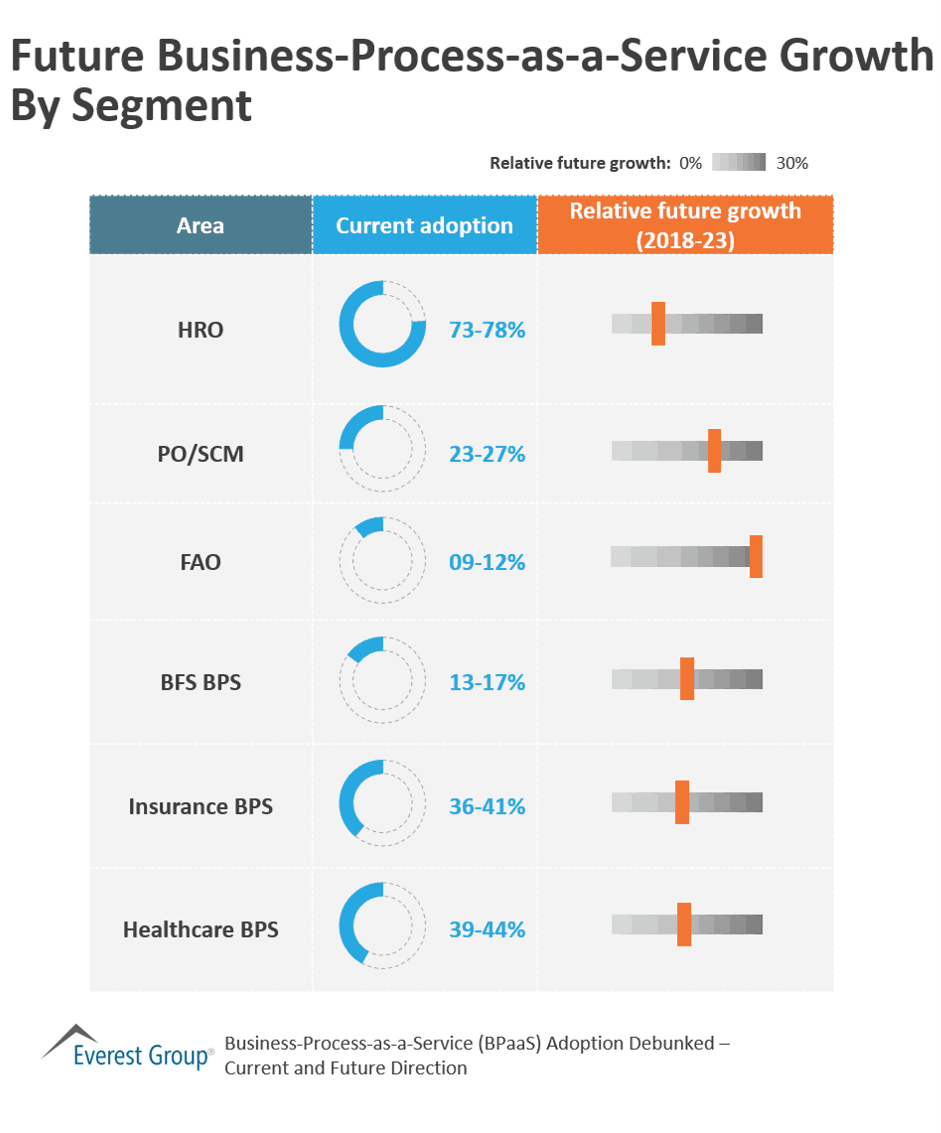 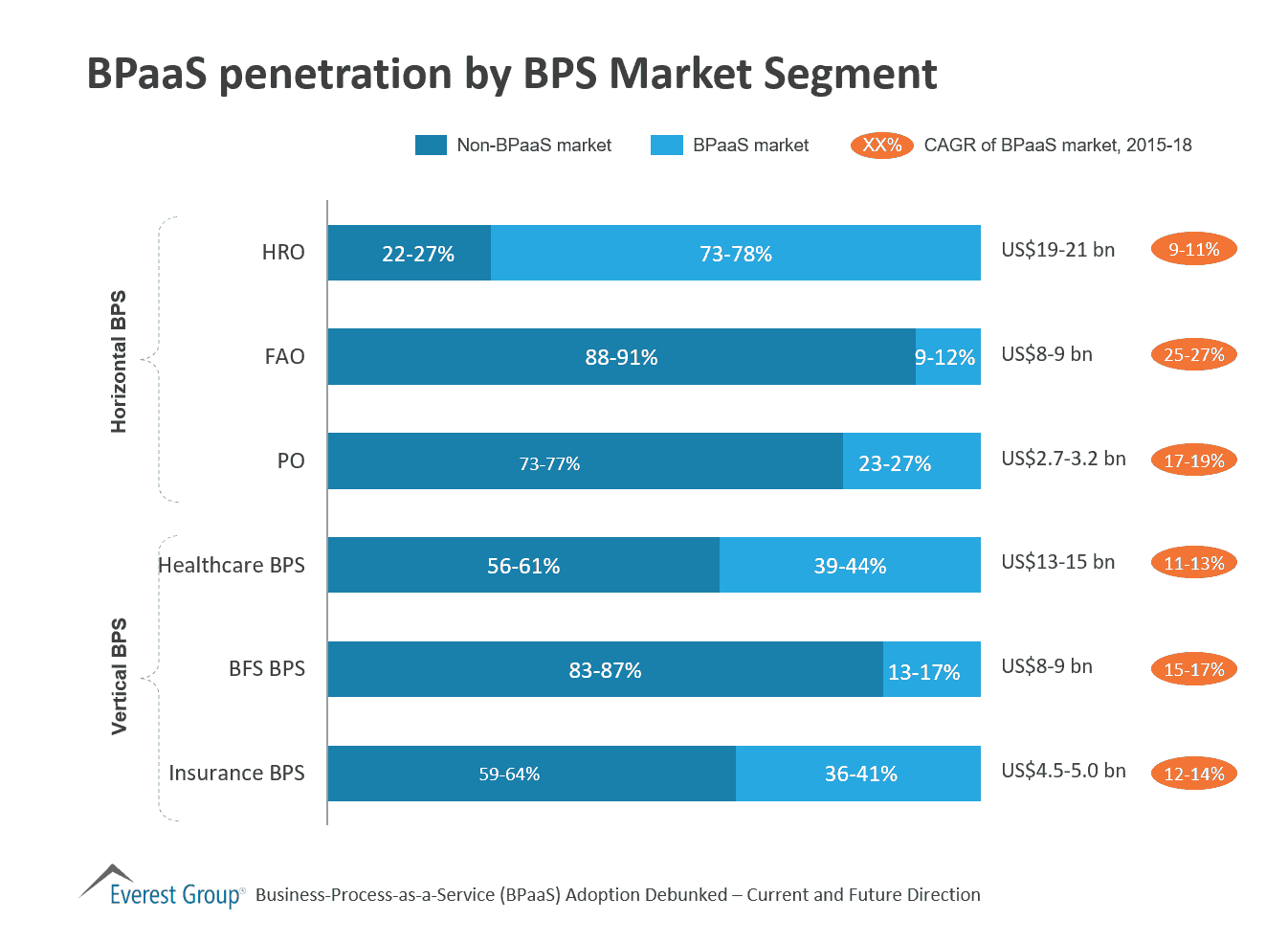 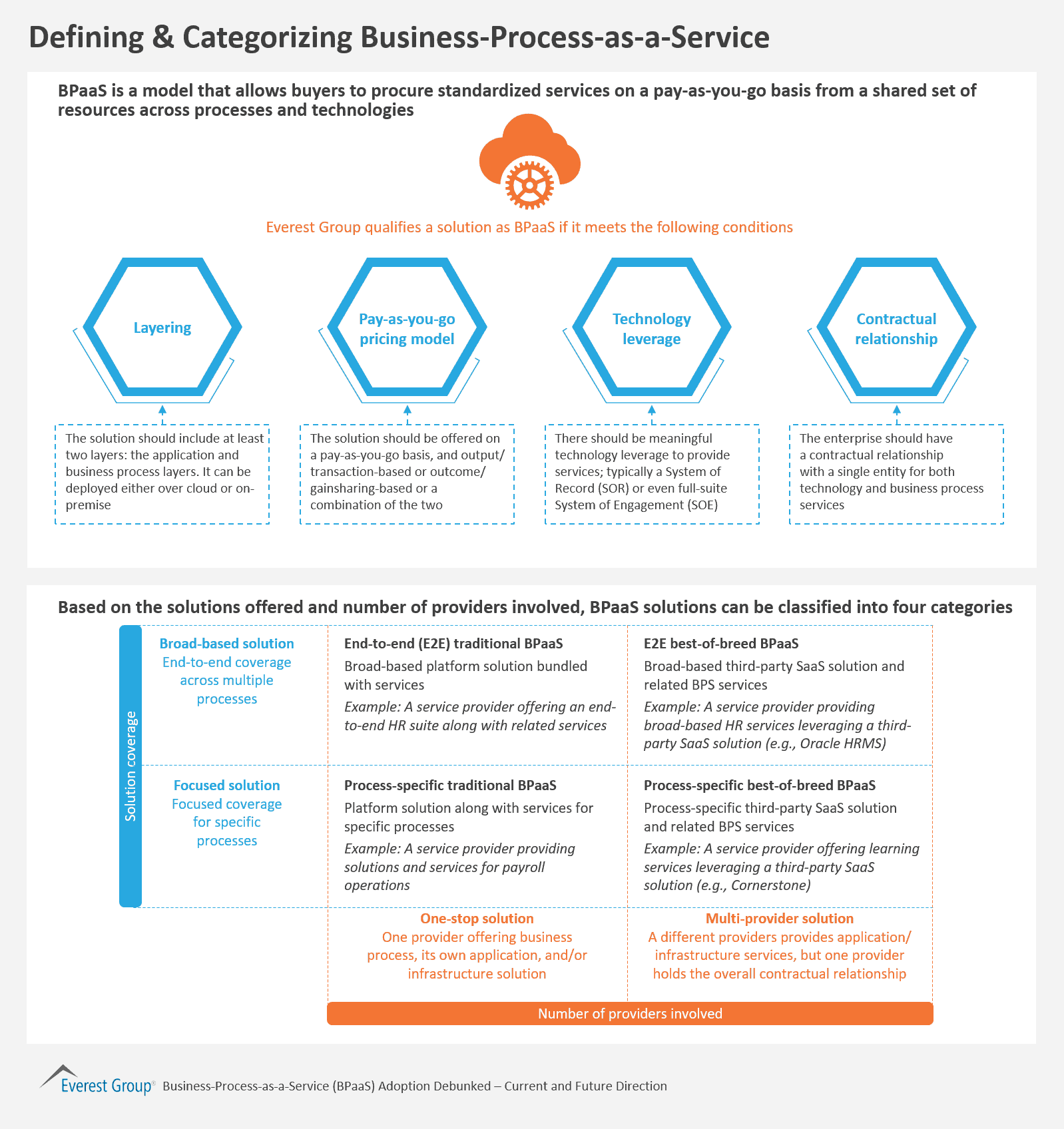 Renowned futurist Kevin Kelly once said, “Possession is not as important as it once was. Accessing is more important than ever.” The rise of Uber is a prime example of the shift to an access-based consumption model in the consumer space. Business-Process-as-a-Service (BPaaS) is a similar construct in the enterprise space. At Everest Group, we define BPaaS as a model where buyers consume/access standardized business process services on a pay-as-you-go basis by accessing a shared set of resources – people, software application, and infrastructure.

It’s a reasonable assumption that the move to access-based consumption is great news for the BPaaS model. But the reality is that there are two variants of BPaaS. And there are warning signs for the demise of traditional BPaaS, wherein an enterprise accesses the entire stack – the people, application, and infrastructure – from one provider on a pay-as-you-go basis.

Traditional BPaaS emerged and found traction in the on-premise application era. Essentially, it provides enterprises a more efficient way to access business process services without the large upfront licensing and infrastructure build out costs that were typical of the time. Service providers pushed it, as it offered them the nirvana they had been seeking:

The new-age BPaaS model tries to address these issues. It gives enterprises the flexibility to choose the technology (application and infrastructure) and processing/people component from best-of-breed providers while still reaping the same pay-as-you go benefits of traditional BPaaS. Central to this is the fast rise of the commercial off-the-shelf Software-as-a-Service (SaaS) technology option. SaaS provides the consumption-based construct at the technology level, while BPO does so at the people/processing level.  Of course, some service providers continue to push traditional BPaaS, as the new-age model is not as juicy as the previous one. Their arguments for the traditional model? In addition to having “one throat to choke,” as one provider is responsible for the output and outcome, they claim a more compelling price due to discounts for the entire stack, and potentially better services given tighter integration of BPO services with the underpinning technology

But there are fallacies in their arguments. As far as pricing is concerned, unless the traditional BPaaS model is really scaled up, there are limited levers through which pricing can be made meaningfully lower than the new model. And on the tighter integration point, an increasing number of close SaaS and BPO provider relationship are emerging that can provide a similar, if not better, experience.

Interestingly, as the new-age model accelerates BPaaS adoption, service providers that embrace it have a far better chance of achieving the nonlinear growth they’re seeking. The underlying SaaS construct will provide the required standardized environment, and growth will provide the scale to create a multi-tenant model at the people/processing level as well.

So, is traditional BPaaS living on borrowed breath? The answer is yes. But how many breaths it has left depends on the functional segment it is supporting and time horizon. Where credible commercial off-the-shelf SaaS options already exist and have attained maturity, e,g., for the large buyer segment in HR, it seems like the end of road will come sooner than later. However, where SaaS options are limited or less mature, such as in claims administration, traditional BPaaS model will have a longer life.

But at the end of the day, as more SaaS options emerge and more BPO providers create a delivery model around them, it is more of a question of when, than if, even in these segments.