When we began conducting webinars for Market Vista when it was launched in 2008, one of the most common questions we received during webinars was “what is a captive?” I even recall one attendee leaving me a voicemail within 10 minutes of a webinar concluding that basically said, “You guys suck because I can’t understand what you mean by ‘captive’ – isn’t it just a shared service center?”

In recent times, I am less frequently asked to explain what “captive” means and, in fact, generally find that most industry insiders all understand and use the term clearly.

So what explains our decision to stop using “captive” and instead use “Global In-house Center” or “GIC”?

Have bath salt-inspired zombies eaten our brains? Do we strangely enjoy having to invest 5 minutes defining terms simply so that people can understand what we are talking about? Or are we just desperate for topics for our blogs?

Nope. None of those.

We did it for the children. (Insert ohhhh and ahhhh here.)

The image of the slide below explains the full rationale for the change and you should be prepared to see it A LOT – in webinars, reports, conference presentations, etc. 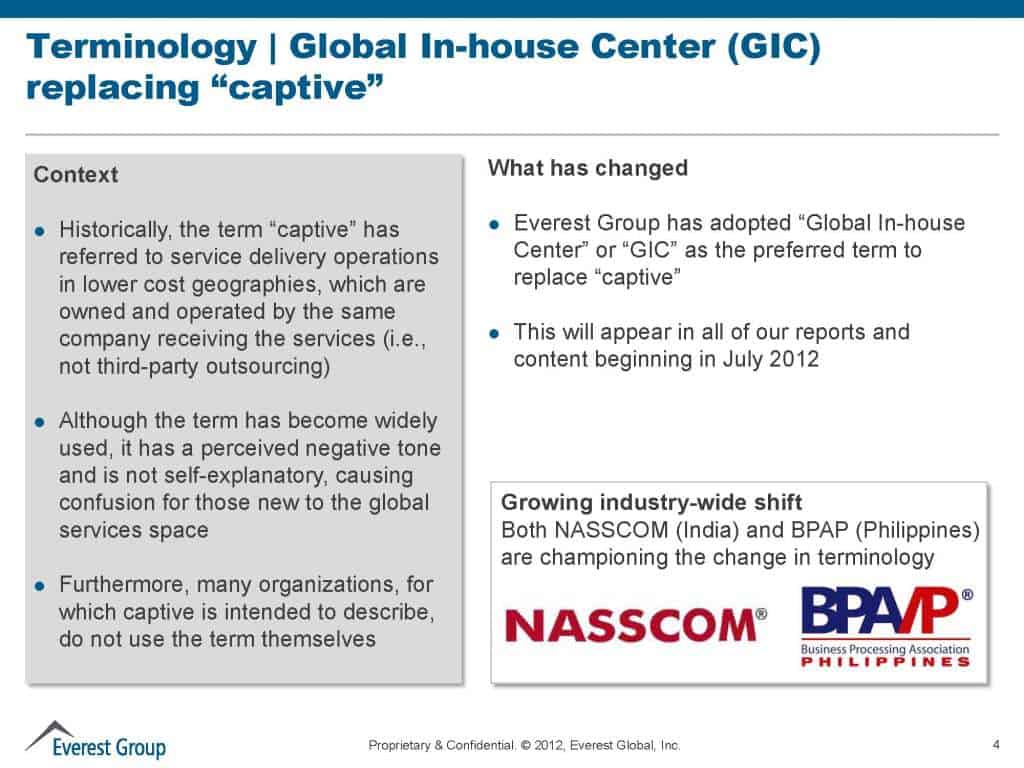 Yes, we know that “captive” is easy to write and say. It has many things going for it.

However, it is a poor word. Quite simply, does anyone associated with a “captive” want to refer to it as a “captive”? Does any bright-eyed recent college graduate run home excitedly yelling “Mom and Dad – I got a job at the captive!” Does the word “captive” inspire anyone, or is it a negative-tinged and off-putting word? Is this really a helpful word to be using 5, 10, or 20 years from now?

As we were contemplating this potential change, I asked a number of my contacts how their organizations refer to internal delivery center organizations. None of them use the term “captive.” Further, all found that they had to explain what “captive” meant to new business users becoming more involved with global services. It is simply not a term that was widely adopted by the people it is intended to describe. In my mind, clearly it is a poor word.

The only arguments for keeping it are inertia and laziness. If we want to find something better, we have to get started at some point, and we agree with Nasscom (India) and BPAP (Philippines) that point is now. And tomorrow. And next month. And next quarter. And next year. And…well, you get the idea.

So we enter a long and painful process of using and advocating for Global In-house Center (or GIC – “Gee-Eye-Sea”) to replace captive. And it will be a journey with lots of opportunity to annoy and “correct” people.

Is “Global In-House Center” (GIC) any better? My view is that it is a good alternative simply because it does not try to go beyond the facts while also being clear. It avoids the temptation to “judge” these centers by referring to them as “innovation hubs,” “Centers-of Excellence,” or other terms that may match intent in some cases but are not clearly and universally true. Global In-house Center is largely self-defining – “in-house” pretty much gets the point across.  “Global” hints at geography but gives room to expand the application (All business units? All locations?).

But we do have to learn a new acronym – GIC. Global In-house Center is a mouthful and will have to be regularly shortened to GIC. But we are all pretty good at learning acronyms…so add it to the list. GIC…and ERP, O2C, ITO, BPO, FAO, HRO, CRM, SCM, ITIL, COLA, CAGR, ROI, TCO, MSA, SOW, and more…