How Low Can They Go? Pricing and Margin Pressures Abound for IT Service Providers | Sherpas in Blue Shirts

The business environment in which today’s IT service providers are operating is one of the most challenging in recent times. A host of buy- and supply-side factors are impacting the prices they can feasibly and competitively charge their enterprise clients in the U.S., and their margins are being constricted at every turn.

On the buy-side, ongoing commodity slowdown led to overall softening in the global services market in 2016. Uncertainties created by Brexit in mid-year and the U.S. elections in Q4 delayed decisions on new sourcing contracts and temporary cuts in discretionary spending in SI type engagements.

The quantum of large application outsourcing (AO)/systems integration (SI) deals (>US$100 million annual contract value, or ACV) as a percent of total deals fell from 3.3 percent in 2015 to a low of 1.7 percent in 2016, reducing the pricing cushion typically afforded by large deals. And because enterprises continue to maintain a portfolio of preferred AO vendors to foster price competitiveness and innovation, resulting in a price war for deals, the average ACV in AO deals dropped by ~20% in 2016.

Most enterprises are optimizing their portfolios of contracted relationships to reduce overall TCO by improving nomenclatures, rates, service levels, T&Cs, productivity, etc., leading to a dip in realized revenue per FTE for providers.

Additional downward pressure on realized revenue per FTE has resulted from an increase in brownfield automation, especially in compete situations and second generation renewals. And renewals fell sharply, from 55 percent in 2015 to just 27 percent in 2016, driving price wars among providers.

On the supply-side, although resource utilization increased for Tier 1 service providers from ~80 percent in 2015 to >82 percent in 2016, it is beginning to max out as a delivery optimization lever. Consequently, providers are trying to achieve higher efficiencies and sustain margins via better project planning, DevOps, agile staffing, and proactive use of automation. 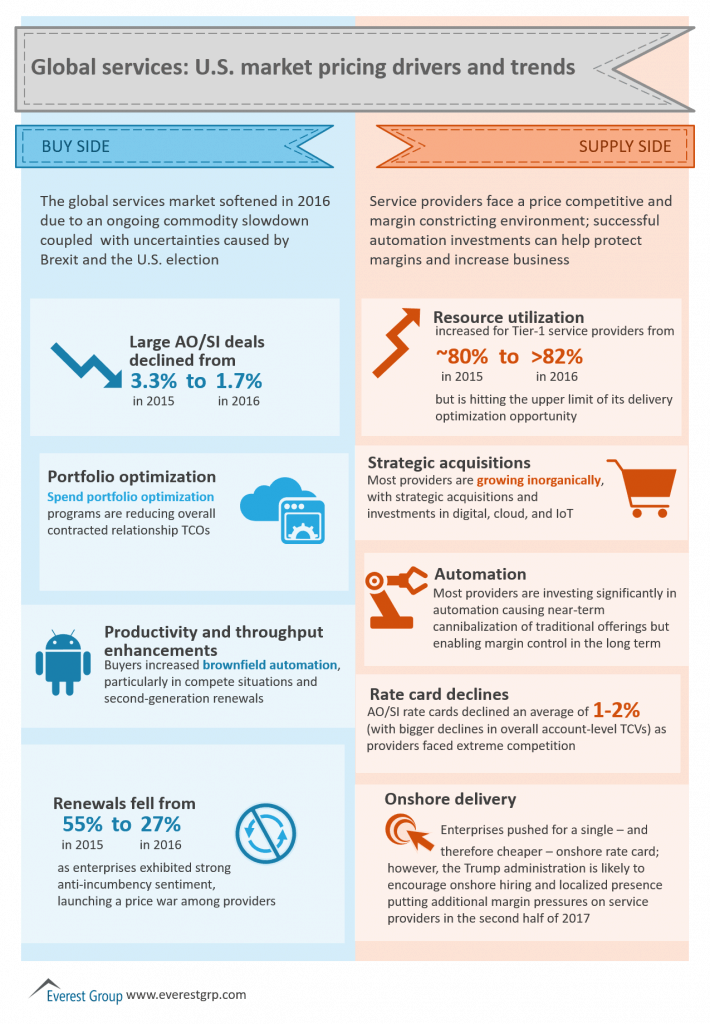 There is extreme competition in most rebid and re-compete situations, which has led to an overall decline in pricing. We saw an average dip of 1-2 percent in AO /SI FTE rate cards, but bigger dips in overall account-level TCVs. And per rate cards, some enterprises have pushed for single onshore rate card that doesn’t delineate between local and landed resources, leading to cheaper onshore rates. That said, the new U.S. government may push for more onshore hiring and localized presence, including sanctions on landed resources. This may push onshore rates higher, marginalize the landed resource model, and put additional margin pressures on service providers in the second half of 2017.

All this paints a pretty gloomy picture for IT service providers. However, they have started pivoting towards a digital first future, which can help stem their margin and profit erosion, and reverse the worrisome growth deceleration. Most are growing their top line and/or capability portfolio inorganically. Most are also investing in and pitching automation capabilities in a bullish manner. While this may led to a near-term cannibalization of their traditional offerings, in the medium- to long-term it will help sustain their margins in a price competitive landscape.

Do you believe that a digital first pivot will help service providers get back to double digit growth rates?

As outsourcing engagements mature, enterprise relationships with providers have evolved from focusing [...]

Getting the best deal on Salesforce CRM software can be tricky. Most [...]