As disclosed in a pre-dawn Tweet this morning by President Trump, Everest Group has launched a new, alternative facts-based research service line. The goal of the “AlternaFacts” research team is to arm global sourcing executives with market and industry data, analyzed through a proprietary “interpretation lens,” that will enable them to creatively present their competitive capabilities, productivity, efficiency, and performance indicators to their C-suite executives. The AlternaFacts team is also open sourcing the company’s PEAK Matrix™, enabling service providers to position themselves wherever they choose, in whatever market they choose. 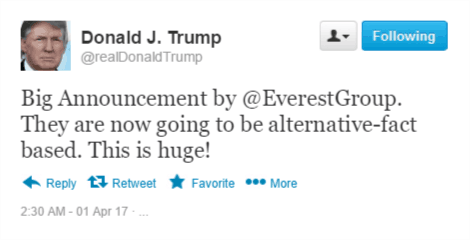 Additionally…Happy April Fools Day! Of course, the above is all bunk. There is no such thing as alternative facts. A fact is, “A thing that is known or proved to be true,” or an “event, item of information, or state of affairs existing, observed, or known to have happened, and which is confirmed or validated to such an extent that it is considered ‘reality.’”

That said, separating fact from fiction (“Orwellian facts,” if you wish) in today’s exceedingly disrupted business environment is no easy task. Against the backdrop of globalization, automation, the Trump administration’s impending immigration reform and other game-changing policies, Brexit (it’s happening for certain), geopolitical issues in the Philippines, and other phenomena that characterize today’s uncertain times, it can be tempting to follow the bang of the most loudly played drum.

But when making critical decisions around service delivery models, location selection, digital, and workforce strategies, embracing the refrain of the most vociferous hype and buzz – rather than obtaining facts and insights – can lead to sourcing executives making significant mistakes. We’re talking about ones that result in multi-million dollar losses, market share erosion, or reputational damage. For example, they can place their enterprises at significant risk if they buy into service agreements priced for last-gen solution models, or make location investments in places optimized for yesterday’s talent needs.

To help enterprises cut through the hype and take proactive, informed steps amidst the uncertainty in today’s rapidly evolving landscape, Everest Group is hosting in May 2017 a two-day event entitled, New World [Dis] Order: Managing in Turbulent Markets. Sessions including “Globalization: Curve or Cliff?” and “Automation: Over-hyped or Under-appreciated?,” and speakers including Dr. Uri Dadush, former Director of International Trade for the World Trade Bank, will provide detailed, fact-based insights on how to thrive in the face of unparalleled disruption.

True that this event is being held at The Watergate Hotel in Washington, D.C. But there won’t be any scandal, attempted cover-ups, or clandestine agendas…just real facts! (And we promise not to tap into your smart phone!)

In our Everest Group forecast for the services industry earlier this year, [...]

When U.S. President Donald Trump met with the CEOs of a host [...]

As disclosed in a pre-dawn Tweet this morning by President Trump, Everest [...]