Our banking analyst team just finished its evaluation of how the leading North American retail banks are doing in their efforts to create the best digital customer experience, and we want to share some highlights from this breakthrough research. This is our third year of assessing 30 of the largest retail banks. The premise for the research is to examine the new consumption context of financial services – where customers are demanding a SUPER (Secure, Ubiquitous, Personalized, Easy, Responsive) banking experience.

Based on our research, nine U.S. banks (Ally Bank, Bank of America, Capital One, Chase, Citi, PNC, SunTrust, USAA Bank, and Wells Fargo) and two Canadian banks (CIBC and RBC) have been featured as “Digital Banking Pinnacle Enterprises™.” These banks demonstrated business results that stood above the rest:

We have also recognized four retail banks as “Agile Performers,” as they made the greatest improvements in 2017. These banks include Ally Bank and Bank of America, both of which launched multiple initiatives to meet millennials’ customer experience expectations, such as virtual assistants for personalized experiences and voice-command enabled banking capabilities. USAA demonstrated best-in-class adoption of digital banking channels and maintained its frontrunner position in customer-centric innovation. USAA also joined the cryptocurrency world by adding the ability to display customers’ bitcoin balances. SunTrust made considerable investments into self-service technologies across its branch network and recorded strong growth in customer engagement on social media. 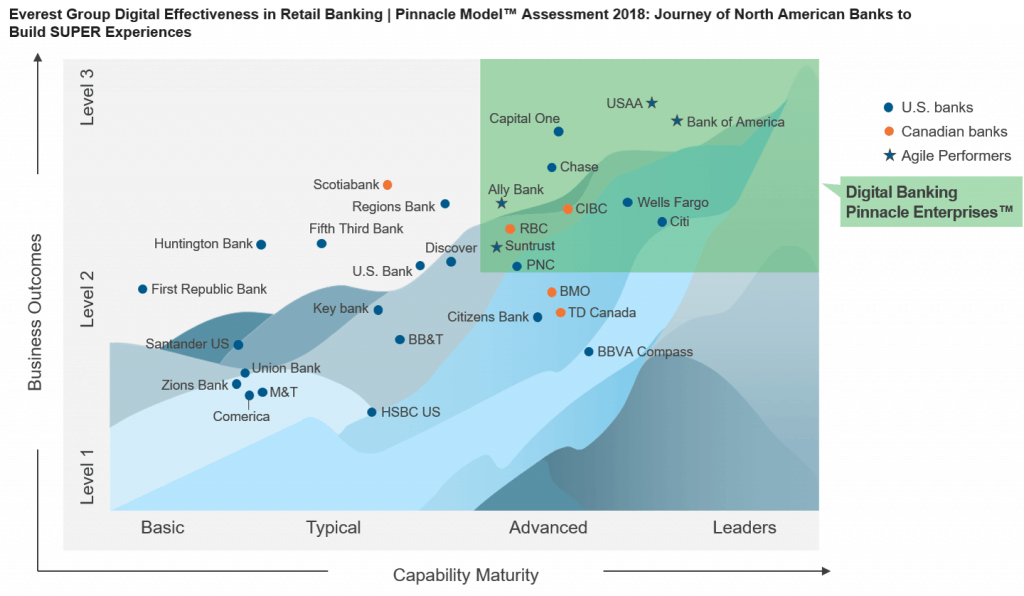 The retail banking industry will continue to make dramatic changes in the next few years. These shifts will require banks to have increased capabilities to deliver an enhanced customer experience whose key elements include:

We believe the current Digital Banking Pinnacle Enterprises have created superior customer experiences because they deliberately invested in their digital capabilities. But the bar for success is constantly moving, as the industry continues to witness rapid and significant changes. Nonetheless, our data from the last three years establishes an increasing correlation between digital functionality and business outcomes. Banks that are able to quickly adopt a human-centered design thinking approach, build usable experiences, and create a culture of obsessive customer focus will be able to better differentiated experiences, achieve growth, create shareholder value, and ensure market relevance.

Capital markets BPO (Business Process Outsourcing) is one of the fastest growing industry-specific verticals within the BFSI segment, with a market size of over $2 billion in 2016. Investment banking is the largest line of business within the capital markets BPO. Asset management, custody and fund administration, and brokerage are the other key lines of business in this space.

Enterprises typically look to partner with third-party pureplay service providers such as Cognizant, EXL, Genpact, Infosys, and TCS to remain competitive in the marketplace, and simultaneously manage their regulatory, risk, and cost concerns. But the BPO majors are facing stiff competition from specialist capital markets BPO providers such as Avaloq, eClerx, and Xchanging, which are more focused and have deeper domain expertise.

Against this backdrop, what pricing considerations should enterprises take into account when selecting a specialist or a pureplay Business Process Outsourcing provider?

What to consider when selecting a Business Process Outsourcing provider

Enterprises in this space typically tend to value and favor specialists when it comes to finding a partner for their capital markets BPO operations. And they tend to be particularly selective, as most service providers –  both pureplay and specialist— do not play in all the segments, but instead focus on building deep capabilities around one or two of the four key business lines.

Are you working with a pureplay or specialist provider in the capital markets BPO space? To what extent did pricing play into your provider selection? Do you think specialists have an edge over pureplay BPO providers in terms of capabilities?

Challenging macroeconomic conditions, demanding digitally-savvy consumers, and rising fraud are pushing P&C insurance carriers to be more demanding than ever of their service providers. Carriers not only expect optimization of cost of insurance operations, but also assistance in gaining and retaining market and customer mind share. This is forcing service providers’ hand to move from an arbitrage-first to a digital-first model.

Meanwhile, insurance BPO service providers’ origins in the arbitrage-first world and their strategic choices in large P&C product categories, such as personal lines, worked well for a while. But with the U.S. and U.K. markets maturing, service providers are being forced to reconsider their strategy. They now not only need to focus on the customer experience, their digital footprint, and lowering TCO, but also on developing deeper domain expertise to drive growth and remain differentiated in the market.

As we talked about in our report, “Property and Casualty Insurance BPO – Annual Report 2016: The Dawn of Transformational Era – Adapt and Evolve to Succeed,” this leaves them with three options to avoid falling into the no-growth trap:

With this acquisition, Genpact has gained deeper domain expertise in U.S. P&C insurance claims market, and has strengthened its portfolio of digital technologies and fraud detection capabilities.

The acquisition also includes National Vendor, a BrightClaim associated company, which has a nationwide network of contractors and offers carriers a direct repair program along with content fulfillment. Genpact can leverage this to provide cost-effective and faster claims settlement services, which is expected not only to reduce claims payouts for insurers, but also to improve the customer experience.

Genpact’s top competitors in the U.S. P&C market are Cognizant and EXL. With both of them continuing to augment their capabilities and developing deep domain expertise, it was imperative for Genpact to make a move. As a favorable by-product of this acquisition, Genpact has further strengthened its onshore delivery capability with centers in Atlanta, GA and Austin, TX.

Prima facie, the deal looks accretive and has the potential to enable Genpact to challenge other Leaders in P&C insurance BPO space.

How will other providers in this segment respond? Game on! We’d say….