Who Will Win the Prey Game in the US$76 Billion IT Deal Renewals Market? | Sherpas in Blue Shirts

With the rise of smart machines and robotic technologies replacing labor arbitrage, multi-sourcing becoming a norm, and “as-a-service” models increasing in adoption, the IT services (ITS) market is undergoing radical change. And it could wreak havoc on – or mean opportunities for – ITS providers nearing deal renewal time. 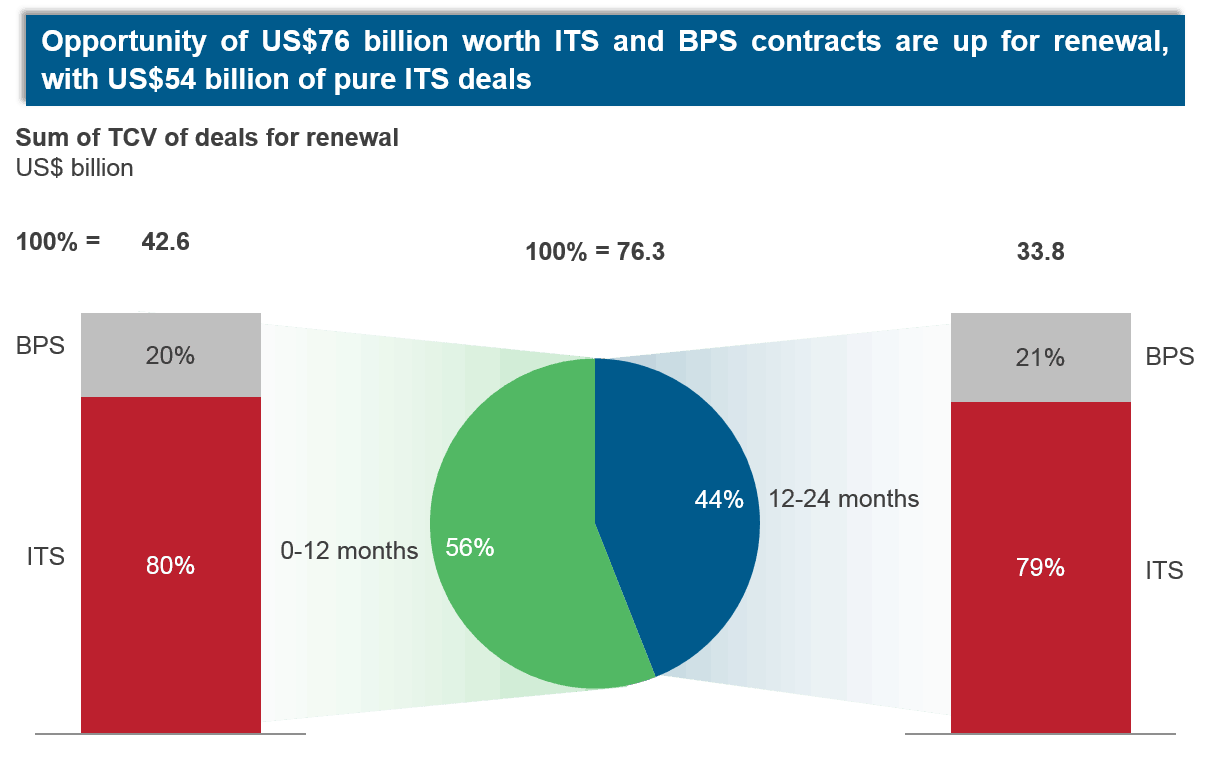 It’s abundantly clear to us that multiple hunters over the last few months have been eyeing big portions of the US$76.3 dollars in IT services contracts soon to be up for renewal. And if they’re not careful, it could mark the end of millions or billions worth of business for several companies. The verticals primarily at stake are BFSI, Healthcare, and Energy and Utilities, which have a combined share of more than 55 percent of the total pie.

But before we talk about how these providers can fend off their attackers, let’s take a quick look at the state of the market, per our recently released Report on Upcoming Contract Renewals (ITS) – 2015:

With so much renewal money up for grabs, who will win the hunting game? A David versus Goliath story is currently playing out in the deal renewal industry. Incumbent service providers want to expand their footprints across clients and fend off the attacking competitors. Attackers are desperate to penetrate newer opportunities by eating away share from the incumbents.

The reality is, the incumbents have a lot more to lose than the attackers. Given high anti-incumbency sentiment in the deal renewal market (~40 percent of deals are not renewed with incumbents), these providers need to take a serious look at their traditional deal renewal strategy, taking into consideration:

At the same time, attackers can’t reduce their efforts and investment in winning new clients. Despite all the challenges with incumbents, enterprises typically default to them fearing cost of change management and disruption. The onus lies on the attackers to demonstrate value beyond niche positioning or price aggression. Attackers need to invest early in building credibility with the enterprises. They need to communicate value in tangible terms beyond cost savings. And they need to make themselves visible to gain mindshare of their target clients. It’s a cultural overhaul where attackers must promote both their vision and their delivery capabilities in the market.

It is difficult to predict what lies ahead in this hunting game. But there will certainly be winners and losers. If you’re an IT service provider, will you be one of the winners?

How Low Can They Go? Pricing and Margin Pressures Abound for IT Service Providers

The business environment in which today’s IT service providers are operating is [...]

From Labor Arbitrage to Digital Arbitrage: Shareholder Value in the New IT World

4 Things to Think about as a Service Provider in 2016

Management consultant and bestselling author Peter Drucker wrote, “The only thing we [...]

DevOps: Disruptive and Changing the Purchase of IT Services

Businesses now demand that IT departments dramatically change the velocity of the [...]