Accenture Takes Over from CGI to Salvage HealthCare.gov | Sherpas in Blue Shirts

You could hardly be surprised when news came out earlier this month that the Obama administration was considering replacing the incumbent HealthCare.gov vendor – CGI Group – with Accenture. By now, the rollout of Obamacare’s (or the Affordable Care Act) much-touted flagship health insurance exchange website, HealthCare.gov, has entrenched itself as a case study in how NOT to implement a large-scale IT system.

With costs incurred inching northwards of US$400 million (at last count) and multi-faceted complications resulting from the ambitious launch across 36 states, the harsh media and public spotlight has laid bare various problems beset the program. Despite having an array of veritable IT service partners (including the likes of Booz Allen Hamilton, CGI Group, and, later on, UnitedHealth Group), the website was plagued by frequent crashes, error messages, delays, and other glitches, frustrating consumers who looked to sign up for a health insurance policy.

Now that the initial hyperventilation and brouhaha over the episode has settled, it is time to evaluate the lessons for service providers and buyers alike. As is the case for any major IT engagement, one can never hold a single stakeholder to take the fall when things go south. Here, there were a wide range of missteps, including disagreements over project leadership, lack of communication between vendors and administration, inadequate testing, underestimation of web traffic, divergence of political ambitions regarding IT imperatives, murky ownership, and an absence of a clear problem-mitigation strategy, which in totality led to the mess the administration finds itself.

As one would expect in a scenario like this, there is no one-size-fits-all strategy. However, to distill the key learning for a large-scale IT project involving various stakeholders with divergent viewpoints, it is essential to:

There is an overarching necessity to identify the operational challenges beforehand in order to mitigate post-implementation complexities. With federal IT spending expected to increase, it is essential that service providers and buyers gear up to inculcate predictive thought leadership as the silver bullet to avoid messy reactive measures.

Accenture would seem like the ideal fit for a project of such magnitude, given its proven expertise in the domain – it led the construction of California’s state health insurance exchange, which received positive feedback from stakeholders. Also, this type of a large-scale systems integration engagement is right up its alley, and plays to its strengths. This is reflected in Accenture‘s positioning as a leader across Everest Group’s PEAK matrix for healthcare and life sciences ITO. That said, the company will be under increased scrutiny and immense pressure to deliver given the attention the project has garnered. 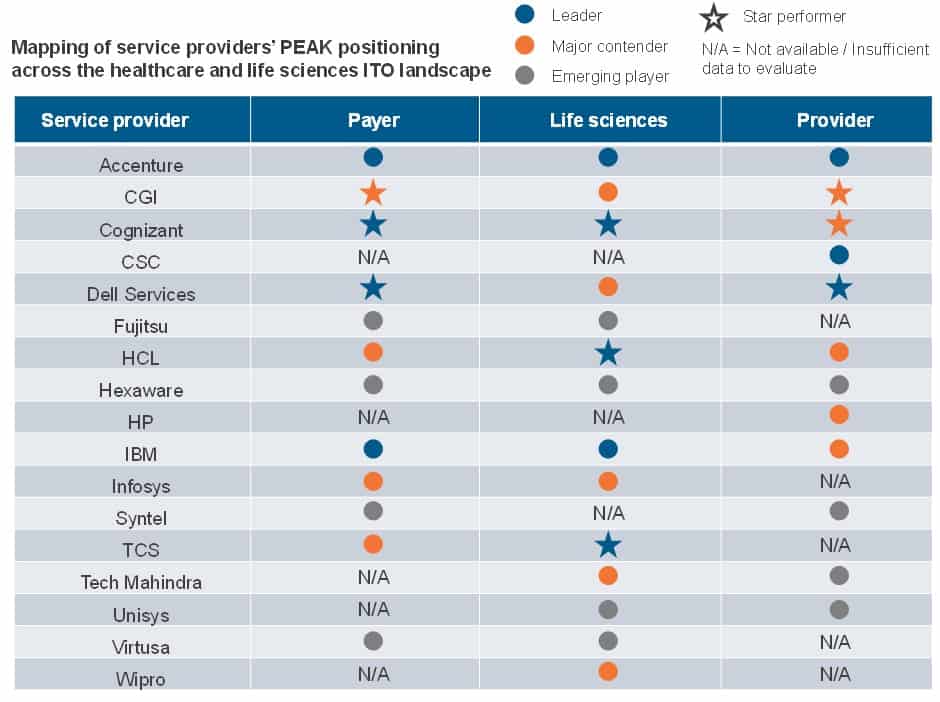 For more perspective on ITO trends, buyer imperatives, and market opportunities in each of the payer, provider, and life sciences market segments, read Everest Group’s complimentary report on State of the Healthcare & Life Sciences ITO Market: 2014. The report also looks at how the Healthcare and Life Sciences ITO opportunity will pan out in 2014, and provides projections on its growth and market size going into 2020.

Engineering service providers who demonstrated critical capabilities to enterprises over the past [...]