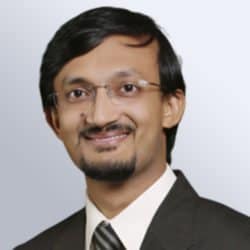 Recent news announcements on several third party service providers’ pullouts from Costa Rica may lead people to believe that the country is losing its luster as a sourcing destination for outsourcers and global in-house centers (GICs). But, before jumping to any conclusions, let’s gain some perspective on these announcements.

HP in February 2013 announced it was scaling back the English-language customer support team in its Global Services Center by 400 employees. However:

Rather than signaling that HP’s confidence in Costa Rica is shaken, this move indicates a strategic shift in how the company plans to utilize the location, and that the kind of work supported in the country may be moving up the value chain.

Reportedly driven by rising wages and other operational costs, TeleTech is expected to cut ~ 160 of its 1,250 positions in Costa Rica. And while Stream Global Services recently shuttered its 700-750 FTE operations in the country, it opened a new center in Honduras with a capacity of 750 FTEs.

Everest Group believes these developments are the result of the providers’ evolving location portfolio strategies to control/optimize service delivery costs with rebalanced footprints.

While the country has traditionally been, on average, 30-40 percent more expensive than other less-developed locations in Central America for delivery of bilingual (Spanish-English) voice-based BPO services, it is still fairly attractive due to its:

And although wage inflation and attrition levels increased steadily over time, and are now at levels that make its cost profile less attractive than lower-cost and lesser-developed options in Latin America (Managua, Guatemala City, San Salvador, Tegucigalpa, Santo Domingo, Peru, and Colombia) and the Caribbean, sourcing activity in the country has not slowed down for third party providers or GICs.

In fact, Costa Rica experienced record delivery center establishment activity in 2012, on par with China, and behind only India (see Exhibit 1). Amazon and Bridgestone are among the most notable companies that setup GIC operations in Costa Rica last year. 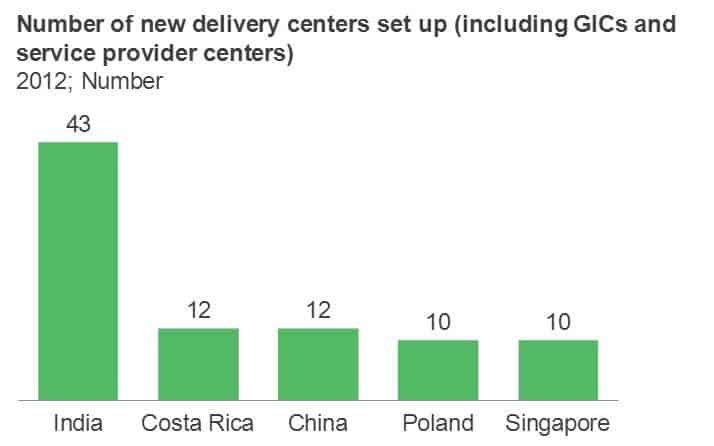 Moreover, as depicted in Exhibit 2, it has dominated center set-up activity in Latin America for the past three years. 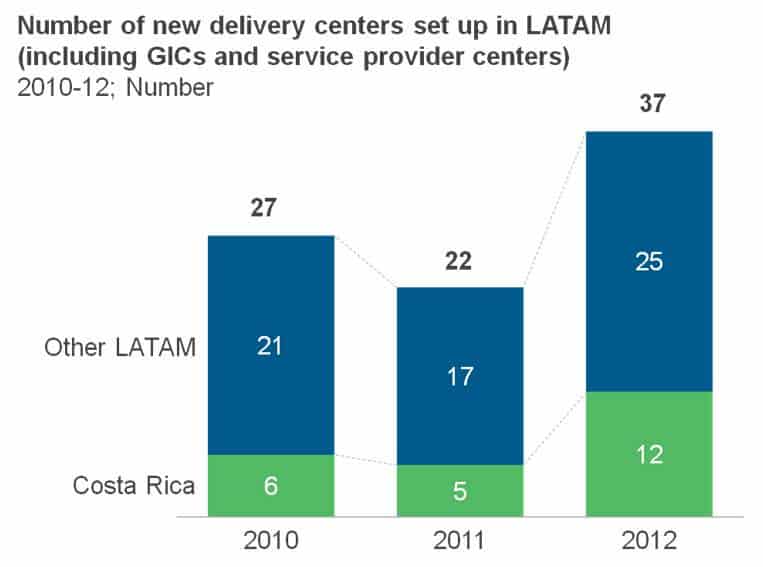 Costa Rica clearly continues to present an attractive mix of skills and opportunities, and these often outweigh the higher cost of operations in service providers’ and GICs’ tradeoff analyses.

So what’s in Costa Rica’s future as a sourcing destination? Everest Group predicts the market will continue to mature across multiple dimensions, and will exhibit the following major shifts/trends:

While we do not expect Costa Rica’s magic to fade away anytime soon, some of its charm will shift from some specific areas, especially English-Spanish voice delivery, to emerging areas of work such as  IT, knowledge processes and F&A. Moreover, the recent developments in Costa Rica are an inevitable part of the natural evolution/maturation of a delivery location; we’ve seen, and continue to see, similar trends in other sourcing destinations such as India and the Philippines.

Shared Services Set-up Success: Intent is as Important as Execution

Clients considering establishing a shared services center – or what we refer [...]