We’ve reached an interesting point in the use of H-1B work visas in the global services industry. Despite many years of debating the necessity to change U.S. visa policies, visa reform failed to get traction. However, the situation has changed with the sweeping U.S. immigration bill. H-1B visa reform is by necessity part of this proposed legislation.

Assessing the probability of immigration reform passing is difficult. However, we believe that Wall Street in its valuation of Indian stocks is currently factoring in a 50 percent probability that the immigration bill will pass.

The U.S. Senate introduced a bipartisan plan to the Judiciary Committee in April with a vote planned for late June or early July. On May 16, a bipartisan group from the U.S. House of Representatives reached an “agreement in principle” and is currently planning to introduce legislation early in June.

If the legislation passes Congress with the visa reform provisions intact, or close to the current form introduced by the Senate, the legislation will result in a much-wanted increase in H-1B visas but will also plunge the global services industry into business model changes because of some onerous provisions in the bill.

We’ve been working with a group of industry experts on the issues involved in the proposed legislation. In this blog post we explore the hard truths of the fundamental provisions and their critical impact on the services industry. We draw heavily on an analysis presented by Rod Bourgeois of Bernstein Research at his 10th annual equity analyst conference and worked with him on this material. We sincerely thank Rod and as well as Jeff Lande of The Lande Group both of whom have been instrumental in helping to develop the thinking in this analysis.

Let’s look at key aspects and implications of the reform provisions and how those fundamentals will impact service providers and their customers.

Who will be affected by the visa reform provisions?

The impacts — both negative and positive — from the visa reform will affect the India-based outsourcing providers, technology companies (such as Microsoft), MNCs (multinational providers such as Accenture and IBM), Global In-house Centers (GICs), sometimes called “captives,” and customers. I’ll discuss the impacts to MNCs, GICs and customers later in this blog.

The two major constituent groups that are most impacted are the Indian outsourcing firms and the technology companies. Historically, these groups were nearly identical in their perspective on H-1B visa: both wanted the “pie” of visas to increase, as providers exhausted the quotas within a week or two after issuance.

But today, getting a larger slice of the visa pie is also of paramount importance to the tech firms. To achieve this they have an interest in restricting access to that pie by other large consumers of H-1Bs (mainly the Indian firms).

In addition, there is a growing sense on Capitol Hill that, although they are operating within the current law, the Indian service providers exploit the H-1B structure to achieve a competitive advantage by paying lower wages than they otherwise would have to pay in the United States.

What will the legislation do?

Objectives. The legislation specifically targets service providers that have a high proportion of H-1B visa holders in their U.S. workforces. The primary objectives are wrapped in the “outplacement” provision, which aims to:

Threshhold of H-1B use by providers. The legislation also establishes a threshold for the use of H-1B visa holders serving U.S. clients, with the threshold ratcheting downward as follows:

Providers operating with a larger ratio of H-1Bs than the allowed threshold will not be allowed any new H-1B visas.

Heightened wages. The legislation includes a provision that effectively will make the providers aggressively using visa holders pay their H-1B employees approximately 20 percent more than they currently pay. This likely will necessitate raising wages for other employees too.

H-1Bs on site in client locations. We believe the most onerous provision of the legislation is a clause prohibiting providers from placing H-1B visa holders on clients’ sites if the provider’s overall U.S. workforce includes more than 15 percent H-1B visa holders.

In picturing the impact to Indian providers, think of Cognizant. We believe their current U.S. staff includes more than 85 percent H-1B visa holders.

Increased H-1B application fee. A consequence of the reform legislation effort will substantially raise the H-1B application fee to $10,000 for employers with 50 or more employees of which more than 50 percent are H-1B or L-1 employees. This sting especially will significantly affect the Indian outsourcing providers as they currently pay $4,325 per visa application.

It’s clear that the service providers that are currently major users of H-1B visas will see the most impact on their business from the visa reform. Who are they? Exhibit 1 shows the 13 top H-1B visa recipients based on their inventories in FY2011-FY2012. 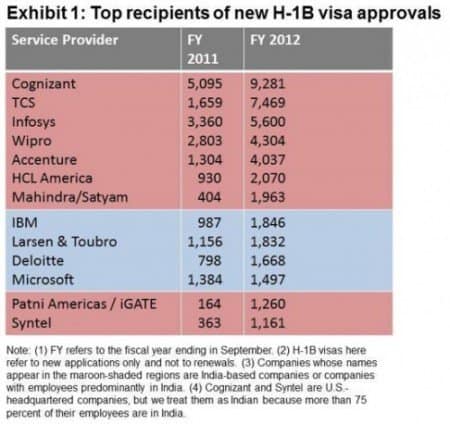 If Congress enacts the legislation in or close to its current state being considered by the Senate, service providers that heavily depend on H-1B visas as part of their business model will need to change their U.S. operating business model in order to accommodate the legislative mandates. It will become significantly more costly for providers whose models depend on the H-1B visas.

Complying with the mandates will require providers to lower their number of H-1B employees as well as pay them higher wages. We believe this will raise their costs to the equivalent of reducing their net margins by 20-30 percent if they don’t employ mitigation strategies.

Moreover, the legislation will result in a larger pie of H-1B visas available and thus will be beneficial to firms that have wanted more visas but availability ran out. But the Indian providers (who currently hold the largest slices of that pie) will not be able to participate as aggressively in the new larger pie.

How will the legislation impact MNCs and GICs?

From an outsourcing perspective, we don’t believe the proposed legislation will have any negative effect on MNCs because companies such as Accenture, IBM, and others already are below the 15 percent threshold. Their overall U.S. business models do not depend on H-1Bs (although they do certainly leverage them in their outsourcing businesses), and they have a relatively small proportion of H-1Bs in their workforce.

Indeed, we believe the visa reform legislation could have a positive effect on MNCs because it will raise the operating costs of their Indian competitors and thus could result in a modest advantage of leveling the playing field.

Likewise, we don’t believe the legislation will negatively affect the GICs. Their parent organizations already have large onshore employee population and will easily fall below the 15 percent threshold for H-1Bs. In fact, it may become more attractive to move work to GICs once Congress passes the legislation because the Indian service providers are constrained in their operating models (i.e., offshore internally vs. through third-parties).

As discussed already, the large Indian outsourcing firms will take the biggest hit. While a few Indian heritage providers, particularly on the BPO side, may fall below the threshold ratios, overall we don’t believe the legislation will have a negative impact on this class of Indian providers.

We won’t know the full impact to service providers until the legislation is adopted. But if Congress passes it with provisions close to the bill’s current form, the impact to the global services industry will be far reaching.

It’s important to note that the language in some clauses of the current form of the legislation lack clarity and some clauses currently lack Congressional consensus on how to apply the provisions. We believe the most significant of these areas are as follows:

This is just the first in a series of blog posts exploring the multi-faceted impacts from the proposed legislation. In future blogs over the next two weeks, we’ll provide more detailed analysis and guidance on the impact to the Indian heritage firms and the possible mitigation actions providers can employ to protect their business. We’ll also discuss in detail how the outcomes will likely impact customers. Everest Group is also preparing to publish a more in-depth analysis in a viewpoint for our research subscribers.

Check out Peter’s other blogs on immigration reform here and here.

Why is Leadership Changing in India’s Service Provider Firms?

Leading service providers in India are going through substantial change due to [...]