The U.S. Congress took steps last week that bring proposed immigration reform — and associated H-1B visa reform — even closer to passing into law. The Senate Judiciary Committee passed the full bill on a bipartisan vote of 13-5. They also agreed to key compromises that, if passed, raise the annual cap on H-1B visas from 65,000 to 115,000 and remove the provision requiring recruiting American workers before foreigners. It gives a green light to Silicon Valley giants and other U.S. tech firms and squelches the hopes of the large Indian service providers that the language in the reform provisions might be softened. The tech companies now seek to influence six GOP senators to vote to pass the bill out of the full Senate with a large majority, which would increase the odds for it passing in the House.

Although expectations that the legislation will pass are now drifting slightly higher than 50-50 odds, it’s still unclear how onerous the language in the visa reform provisions will be. Our first two posts in this blog series on visa reform (Critical Impacts on the Global Services Industry Due to Upcoming Immigration Reform and A Detailed Look at How the U.S. Immigration Reform Will Impact Indian Service Providers and Their Customers) provide background on the impacts to the various global services providers and their customers.

In addition to the potential impacts we outlined in those blog posts, Senator Hatch last week added an amendment that brings L-1 visas into the net for reform and prevents Indian firms from using L-1s to dodge the troubling aspects of H-1B visa reform. For employers with 15 percent or more U.S. employees on L-1 visas, the amendment states they will be prevented from placing those workers at client worksites. Further, they will be unable to assign L-1 visa holders to “labor for hire” arrangements.

Unless the trends reverse, the legislation will uproot the business models of the large heritage Indian service providers. At stake: increased costs and margin hits along with constraints in placing H-1B and L-1 visa holders on site in U.S. clients’ locations.

Aside from praying that the proposed legislation falls apart in the House, there’s no “silver bullet” for eliminating the negative impacts to the Indian providers. So in this third post in our series on H-1B visa reform we present risk-mitigation strategies and our analysis of the likelihood of those strategies succeeding. We worked closely with Rod Bourgeois of Bernstein Research and Jeff Lande of The Lande Group in developing the thinking in this analysis, which also draws heavily on Rod’s presentation at his 10th annual equity analyst conference. We sincerely thank Rod and Jeff for their insights in this analysis.

What mitigation strategies are available?

Our analysis breaks down the H-1B reform provisions into six major aspects (shown in the blue rectangles in Exhibit 1). With the exception of two aspects, we suggest one or more mitigation strategies (green rectangles) for the impacts to the Indian service providers. 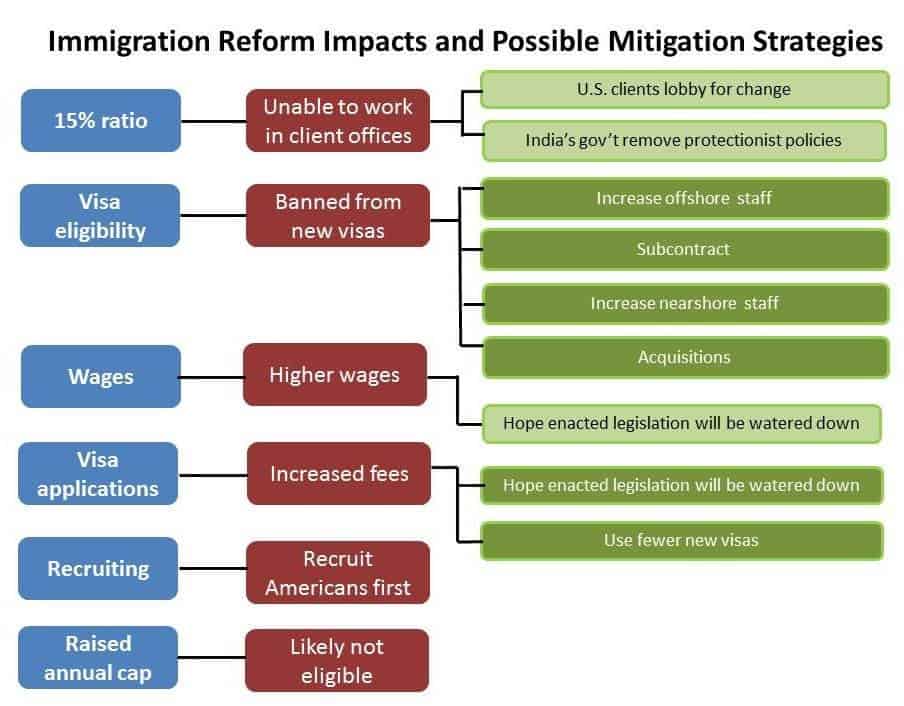 Let’s look at the likelihood of the above mitigation strategies. This is not an exhaustive analysis, but these factors are the primary ones of concern for the Indian firms.

U.S. clients lobby. It is possible that the big U.S. clients of Indian providers might lobby Congress to change the language of the 15 percent ratio of H-1B holders to U.S. employees due to their concerns about significant disruption to their operations and talent access. However, our research indicates this has not happened to date, and we don’t believe it will occur.

Political factors. India’s government could eliminate its protectionist policies limiting the sale of U.S. tech products in India with the hope that, in turn, this strategy would influence Congress to water down the 15 percent ratio provision. However, there is currently no U.S. political force stepping up to help the Indian firms.

In fact, our observance is that it may be more important politically to pass comprehensive immigration reform than it is to avoid bilateral issues with India.

Although the U.S. tech firms were allies of the Indian firms initially in the visa reform debates in order to increase the “pie” of available visas, this is no longer the case. Presumably the reason for their about-face in support is that the proposed higher cap on available visas and greater share of the “pie” of visas going to U.S. firms meets their visa desires. We have observed statements by such tech firms as Microsoft and IBM in support of the Senate’s visa reform provisions and in support of putting pressure on India to change its protectionist policies.

Staffing  model alterations. The proposed ban on eligibility to apply for new visas (triggered by a 75 percent ratio of H-1B or L1 visa holders to U.S. employees, with the ratio dropping to 50 percent after FY 2016) limits the access of Indian firms to new visa holders.

Alternatively, they could hire subcontractors from companies that primarily operate in the United States that are below the visa headcount threshold ratio.

Or they could acquire businesses with high levels of U.S. staff and rebadge them. However, there are well-known risks in achieving return on investment in acquisitions of services firms. But let’s assume Indian firms decide to take this risk. At what point does an acquisition clearly make sense for an Indian IT firm? Where is the break-even point for low-margin work with high headcount? Would it break up the business of some firms into sub-businesses?

We also note that the proposed legislation includes language stating that if 90 percent of an employer’s visa holders have applied for Green Cards, they would be removed from the visa headcount ratio calculation. However, we do not believe this mitigating factor is feasible to pursue.

Higher wages. The proposed reforms require that, for new visa holders, employers pay higher wages for H-1B workers than they currently pay. We assume this also will necessitate higher wages to existing workers, especially since they have more tenure and relevant experience. The only mitigating factor we see for this provision is for the House to draft wage requirements lower than the Senate’s proposed requirements.

Increased application fees. The legislation also increases visa application fees to $10,000 per visa for employers with 50 or more employees if more than 50 percent are H-1B or L1 employees. As a point of reference, a fee of $10,000 on 5,000 visa applications ($50 million) equates to 3.2 percent of Cognizant’s current operating income. Note that 5,000 applications are fewer than Cognizant’s FY2012 level but similar tot FY 2011. The Indian firms could mitigate the expense impact by using fewer new visas.

Another mitigating factor is that the language in this provision could be watered down in the House and/or during conference. However, we believe it will remain in the legislation because Congress needs to raise funds to ensure the bill is cost neutral.

Pass costs through to clients. Another strategy for mitigating the financial impact from visa reform is for the Indian firms to try to pass the costs onto clients by renegotiating contracts and/or raising prices. For reasons detailed in our second blog post in the series, we do not believe this strategy would succeed.

Although the Indian firms will likely need to consider all of the above mitigation strategies; however, as shown in Exhibit 2, we believe the tactics with the highest viability are the tactics for staffing alteration. 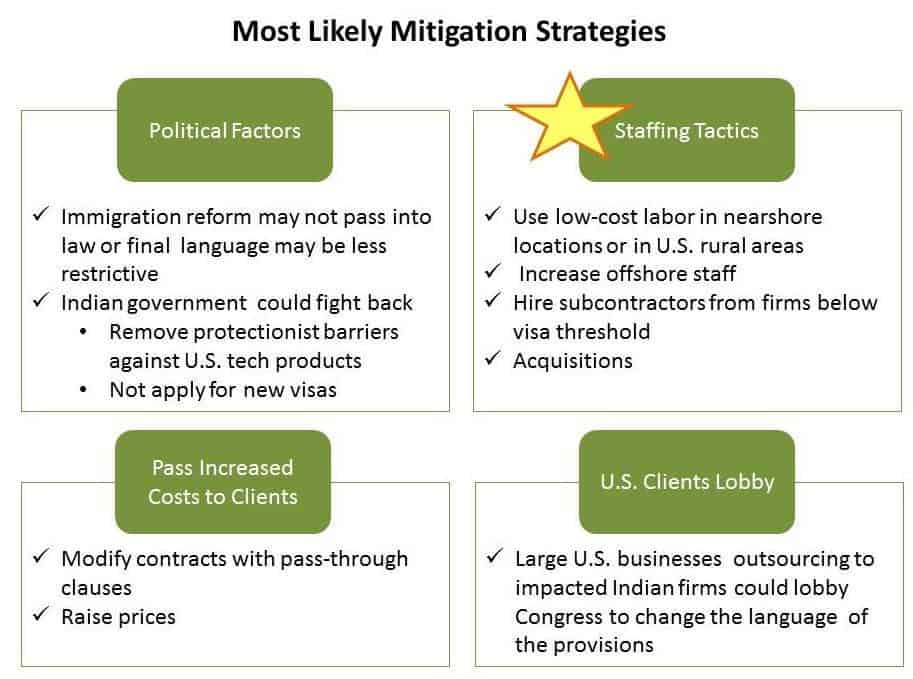 Fortunately the top Indian firms have substantial inventories of visas that they can use to mitigate the short/medium-term impact if Congress passes the immigration/visa reform into law.

We believe that building U.S.-based platforms for vertical-specific BPO markets is a viable strategy for growth among the Indian firms as this would add U.S. headcount that would help lower the ratio for visa holders vs. U.S. employees.

In addition, many of the BPO players are in the position to rebadge their clients’ staffs in order to drive a higher ratio of U.S. staff. It’s fairly easy to transfer a visa to another employer; thus the Indian firms could transfer their visa workers to their clients or even to other services firms.

We believe an interesting and creative mitigating strategy is for large U.S. or multinational service providers to create joint venture structures with the Indian players. This would ensure that current U.S. clients of Indian firms would not experience major service disruption. It would also enable the U.S. players to organically capture market share that the Indians otherwise would lose due to visa restrictions.

Due to the contentious issue of undocumented immigrants, the comprehensive immigration reform and related visa reform might not be passed into law. Even if enacted, there is still a possibility that the House’s version of the legislation will water down the restrictions in the Senate’s version. However, if it passes into law at close to its current version, the visa reform provisions will cause a seismic shake-up among the Indian service providers that are aggressive users of visa workers.

Stay tuned. We’ll keep you apprised of significant changes in visa reform impact to providers and customers in the global services industry.

Check out Peter’s other blogs on immigration reform here and here.

For Growth Objectives, Select A Service Provider Suitable For A Deeper Partnering Relationship

Companies that contract with third-party service providers to build and evolve digital [...]