A lot has changed in the short six months since our initial blog on on the emerging enterprise cloud adoption paths. Recent discussions with cloud infrastructure service providers clearly show that  CIOs and corporate IT seem to be interested in talking about cloud, and RFP flow is definitely increasing, but we’re not seeing conversion to contracts and revenue. One statement by a leading cloud service provider was particularly interesting:

“The cloud RFPs we’re seeing from enterprise IT are really strange, and poorly thought out. It’s like they’re just going through the process to get someone off their back…”

At the same time, there does appear to be an acceleration of enteprise spend on cloud, including SaaS, PaaS, and IaaS.

While there are a number of factors in play, we’re finding the biggest one is the role of the business user, and how cloud is eroding the monopoly corporate IT has traditonally had over information technology, services, and even infrastructure. People tend to forget that developer teams are frequently embedded in business units and deparments. They have budget approval limits, but typically high enough that they can spin up dev / test environments on Amazon AWS, for example, with no flags being raised. They no longer have to go to corporate IT to get a server provisioned, or a test environment setup. This is IT budget now flowing through the business, though through technical and not business resources.

As a result, IT is under significant pressure as it sees its budget dollars being threatened. It hasn’t fully figured out the implications of cloud for its IT organization, but can’t appear to be a roadblock to the business. What we see, although not in every enterprise IT organization, is a pretty substantial increase in tire-kicking, pilots and “RFPs” to give the illusion of  progress.

Based on an additional set of conversations, analyses, and insights from recent client work, we’ve updated our enterprise cloud adoption framework to more strongly reflect the business buying dynamic. This new framework is defined by two major dimensions:

Based on these factors, here’s our new framework and overview of the different ways we’re seeing enterprises migrating to the cloud: 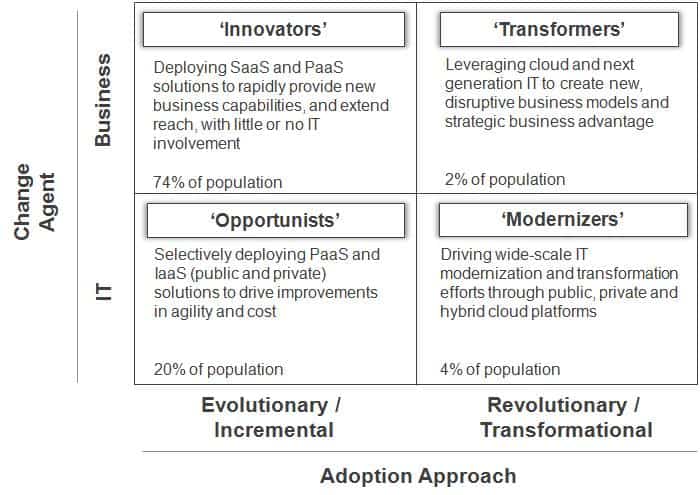 A quick note on the different models:

Adoption is largely driven by individuals, departments, or functions around and outside of IT (even in the case of IaaS and PaaS). Business users want to innovate, recognize they can do it themselves, and feel empowered to do so.

The next most common model is corporate IT driving cloud adoption, albeit for specific, focused use cases. The goal is not broad transformation for “how IT does business,” but targeted adoption to prove the model, or to demonstrate improvements in efficiency and cost. Some of the most frequent use cases include:

The private cloud is still the preferred model for corporate enterprise IT, with most CIOs looking to play it safe with known enterprise vendors like IBM, VMware, or VCE. Note that the 20 percent in the Cloud Adoption Paths graphic above does not refer to the percentage of enterprise IT organizations that are pursuing cloud, but rather the number of companies in which cloud adoption is being driven predominantly by an “IT opportunist” model.

While they are the exception, a few enterprises’ CIOs are using next generation IT platforms to drive wide-scale modernization and transformation of their environments. These CIOs are viewing private, public, and hybrid cloud models as vehicles for fundamentally changing their infrastructure strategy, and are actively seeking to get their organizations out of the data center business. Although  rare, two of the more interesting examples we’ve recently seen include:

These are enterprises using cloud and other next generation IT platforms to create new disruptive business models, transformational improvement in growth and profitability, and strategic advantage. The starting point for their discussion is not around cloud technology, but how to use the agility, flexibility, reach, and cost effectiveness of cloud to enable new business strategies. Business executives are typically the emerging change agents. The best example in the public domain is:

While Transformers is the rarest adoption path today, we do believe it will become far more frequent as the market matures, and as cloud changes the competitive dynamic in some industries.

Note that there are still a small (and shrinking) number of enterprises that are still purely in “Observer” mode, and not actively deploying SaaS, Paas, IaaS, or private clouds anywhere across their organizations. We haven’t reflected them in our framework, and struggle to see any enteprises where at minimum there isn’t at least an individual or department using a cloud-based collaboration or productivity app.

Stay tuned, as we’ll soon be posting more here about implications for both enterprises and the cloud service provider community.