A Clear Sign of Maturation: A Third of All ADM Headcount Serving U.S. Companies Is Now in Offshore Locations | Sherpas in Blue Shirts

Just how mature is the offshore market today? Let’s look at overall headcount worldwide serving the Unites States’ ADM requirements as a gauge.

In 2007, approximately 2.2 million IT staff were delivering ADM services to U.S. companies from offshore locations. In 2008, the sub-prime crisis hit and the economy went into a downward spiral. Discretionary spending on fresh custom application development, consulting services, and large transformational IT projects came to a screeching halt. The mantra was one of survival, yet backed by a readiness to accelerate hard when the economy rebounded. While a full bounce-back is arguably yet to happen, 2010 and 2011 witnessed a partial uptick in corporate fortunes in America, and ADM spending picked up again. However, procurement executives were cautious in their approach, and were mandated to make sure no opportunities for further cost reduction were left untapped. Offshore providers’ margins came under attack, and innovative, client-friendly pricing models replaced old ones that buyers simply would have nothing to do with anymore. Since offshore locations offer lower billing rates courtesy of labor arbitrage, many fence sitters on the topic of offshoring quickly became adopters. Clients already offshoring increased their exposures to lower cost destinations like India. As a result, while the overall IT market had almost negligible growth since 2008, the offshore providers kept growing, albeit at a lower rate compared to pre-crisis days. 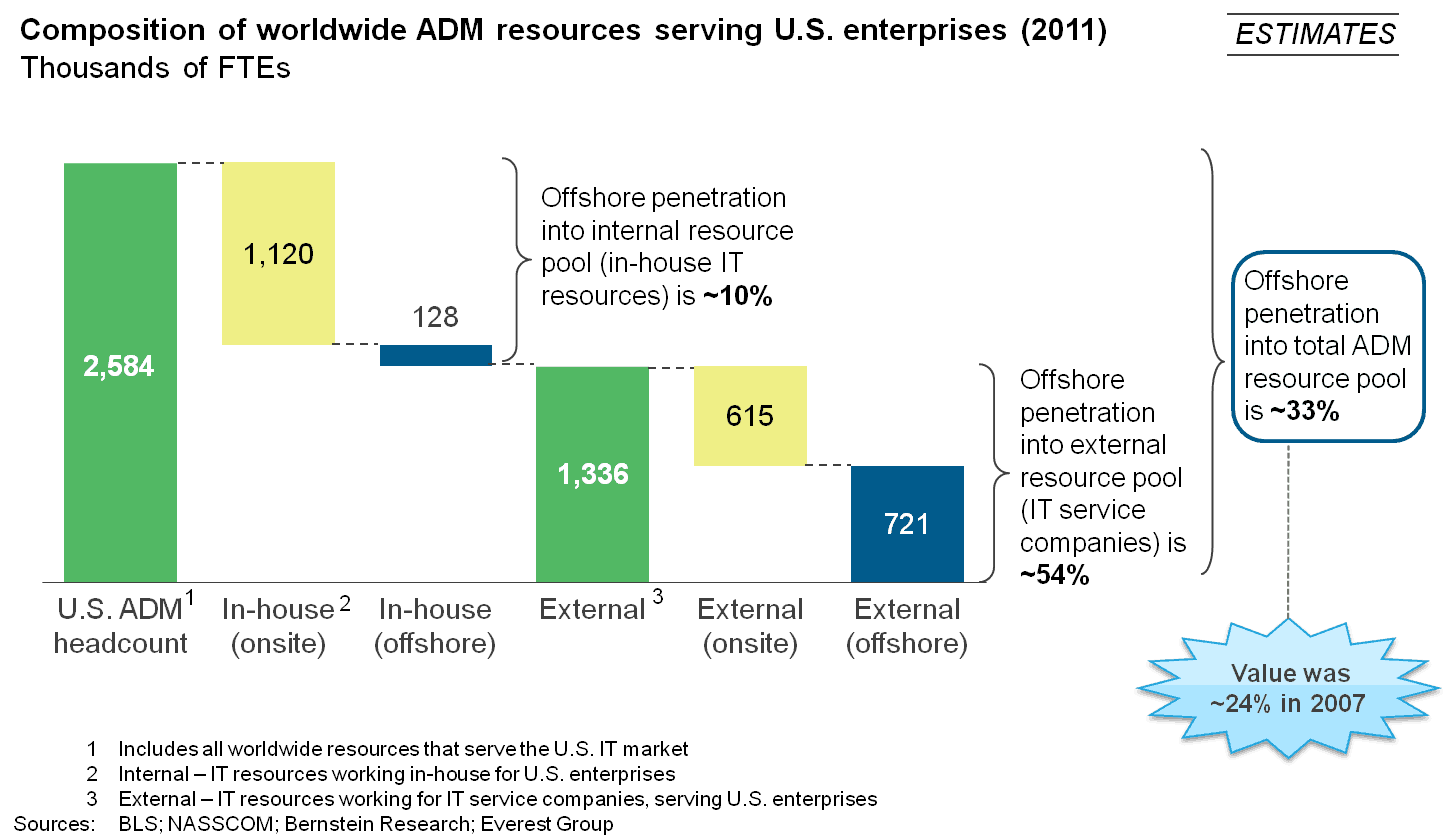 In 2011, the headcount serving U.S. ADM scope stood at close to 2.6 million. Just under half (~1.25 million) account for in-house employees of U.S. corporations, and 10 percent of these are actually in offshore shared services centers. Approximately 1.3 million FTEs of third party service providers serve U.S. ADM scope. More than half of these are employed in offshore locations such as India and the Philippines. In 2007, about 45 percent of third party ADM resources were in offshore locations. So there has been a nine percentage point increase in offshoring penetration in third party ADM resources serving the U.S. since 2007. Approximately 850,000 of these FTEs supporting U.S. organizations were in offshore locations in 2011, resulting in an overall offshore penetration of ~33 percent of all headcount serving American companies for ADM scope. I expect offshoring penetration to keep increasing, at least for the time being.

With the advent of cloud computing, software-as-a-service (SaaS) has grown exponentially in prominence. Many argue that SaaS is likely to cannibalize custom application development and commercial off the shelf (COTS) software sales, thereby impacting third party providers’ revenues accruing from ADM services. While this may indeed turn out to be true in cases in which clients need very limited customization, for all other situations, custom development is still the only approach. With SaaS necessitating development of multi-tenant applications on emerging cloud platforms, and wrapping pay-per-use pricing and remote access layer around them, it certainly seems like scope for custom application development will increase, this time conducted in-house by software vendors. We may also end up witnessing a host of independent software vendors shipping their internal development work to offshore destinations.

Net-net, SaaS may be a threat to overall application outsourcing, but it is unlikely to erode offshore headcounts, namely programmers who sit and develop, debug and maintain programs in places like India. If anything, developments such as SaaS, cloud infrastructure, big data, analytics, RIMO and the uncertain economy spell opportunities for offshore destinations.

Note: ADM services in the context of this blog include application development, maintenance, the custom development portion of system integration projects, and testing, validation and assurance services.

How Enterprises Can Achieve Full Value from ServiceNow Investments

In response to changing market demands, ServiceNow has expanded its platform over [...]